Not sea kayaking, and not even a trip - but a follow up of our trip to the Thousand Islands, where we checked out where Uffa Fox (British) made his succesful attempt to win the canoe sailing trophy from the Americans in the early 1900's. Elli and I were a litle curious to learn more about canoe sailing.

Elli had to ring the American Canoe Association (ACA) to pay for camping on Sugar Island, and talked to a very enthusiastic Marilyn Vogel. In our research on Sugar Island we had discovered there were to be canoe sailing championships the weekend we were going down to NY to visit Elli's Mum - and we thought we'd drop in and see some of the sailing. Marilyn sent us all sorts of information and directions and told us who to see when we got there - and people were expecting us when we did. Sherrie Winkworth has been going to Lake Sebago (the ACA owns a camp on its shores) since she was a child. Her wooden canoe (a Peterborough) was bought second hand by her father in 1940. Gordon Miller was another long time sailor - being club champion many times, and a long-time office bearer. These were the friendliest people - as was everybody in the camp. The camp is also used by kayakers - sprint kayakers were speeding up and down the lake most of the day. Sea kayaks were having rolling sessions, and there were many paddlers just drifting around in kayaks and sit-ons. The camp has a lot of cabins for hire by members, but we had booked into a cabin elsewhere on the lake before we found this out. All the lakes in this area (Harriman Park) are man-made.

Being a small lake it would appear not much wind gets into it, so the sails are quite large compared to the sea kayak sails. The cruising class of canoes are slightly different than other sailing canoe classes in that they use a paddle to steer with, and have lee boards. Using a paddle to steer with means you can't sit up on the side when it gets a bit windy, and bank out. Lake Sebago apparently is the only place left where they still have this class. There is a formula to allow different size sails on different size canoes.

We watched a race on Saturday morning, and another one in the afternoon - extremely light winds if there was any at all - some canoes were seen to be drifting backwards at times. The paddle can not be used for propulsion. 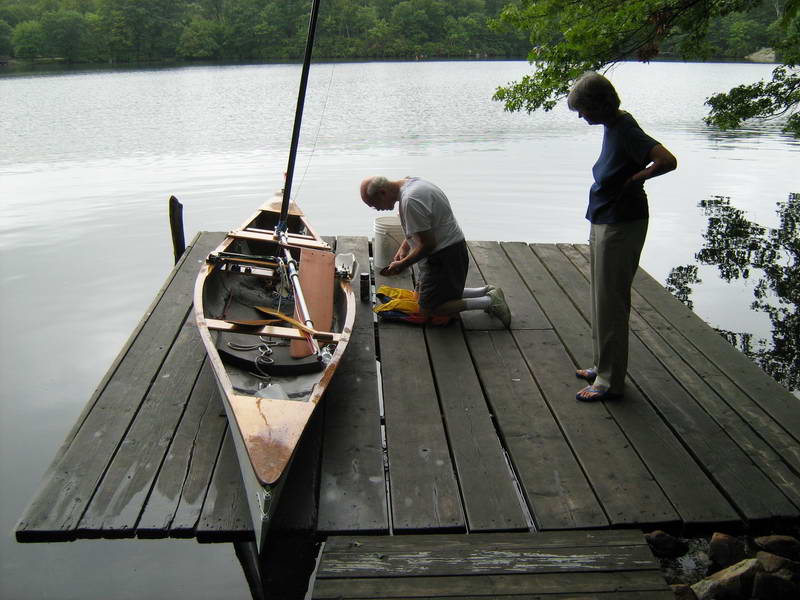 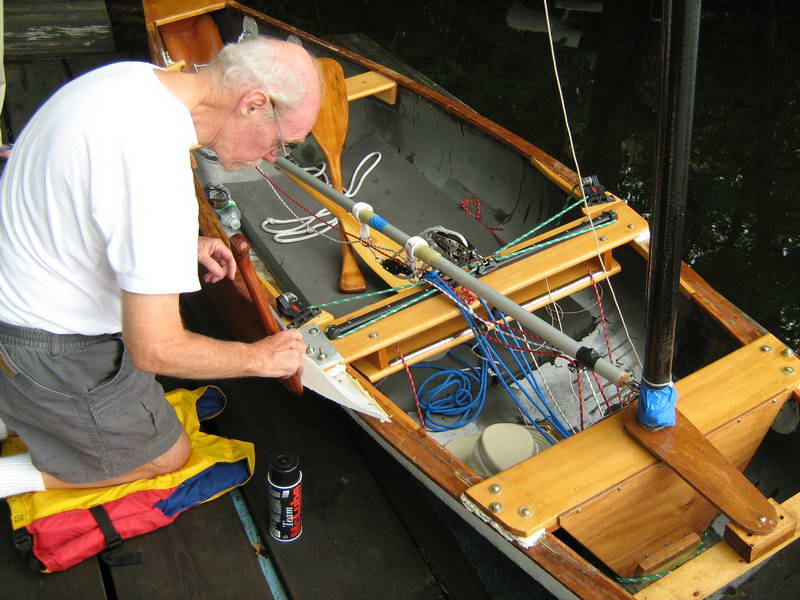 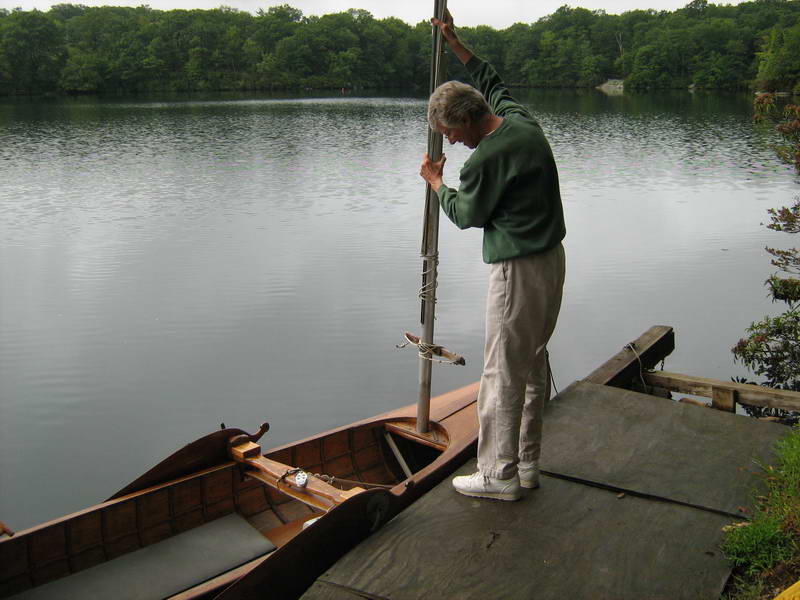 Sherrie stepping her mast in the old Peterborough. 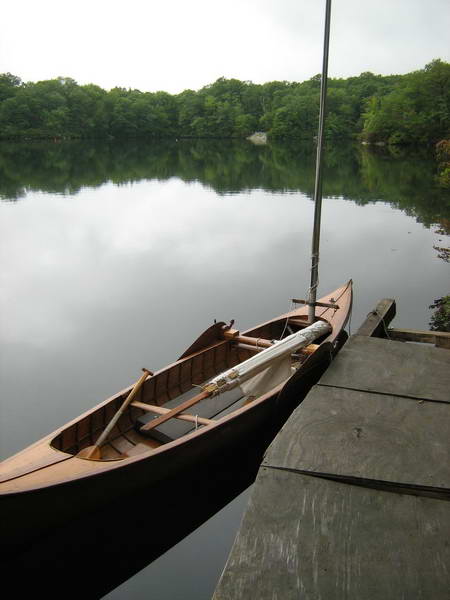 The Peterborough. The only canoe there with twin lee-boards. 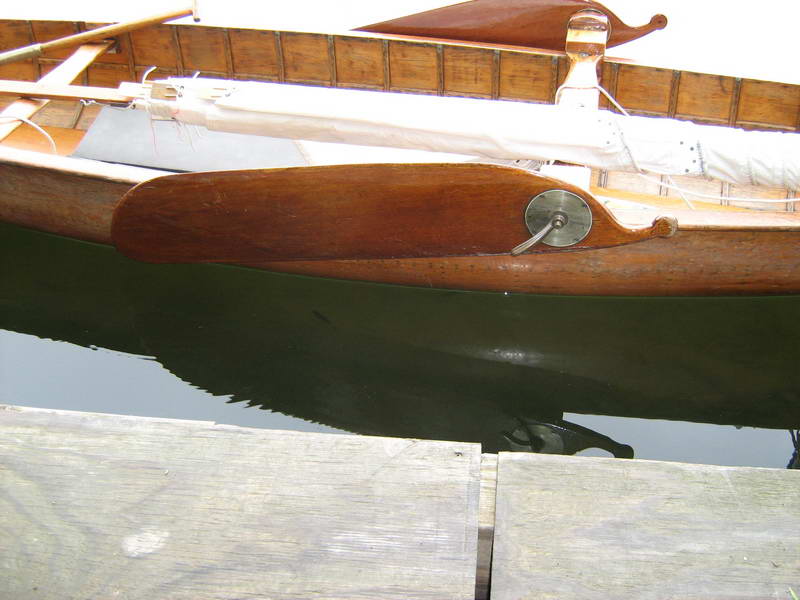 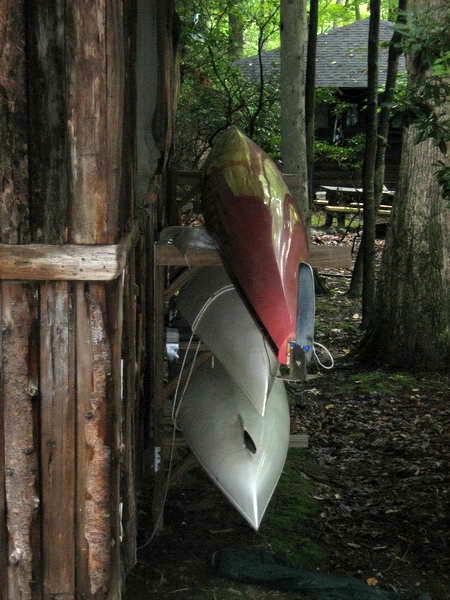 Many other forms of canoes and kayaks around the camp. 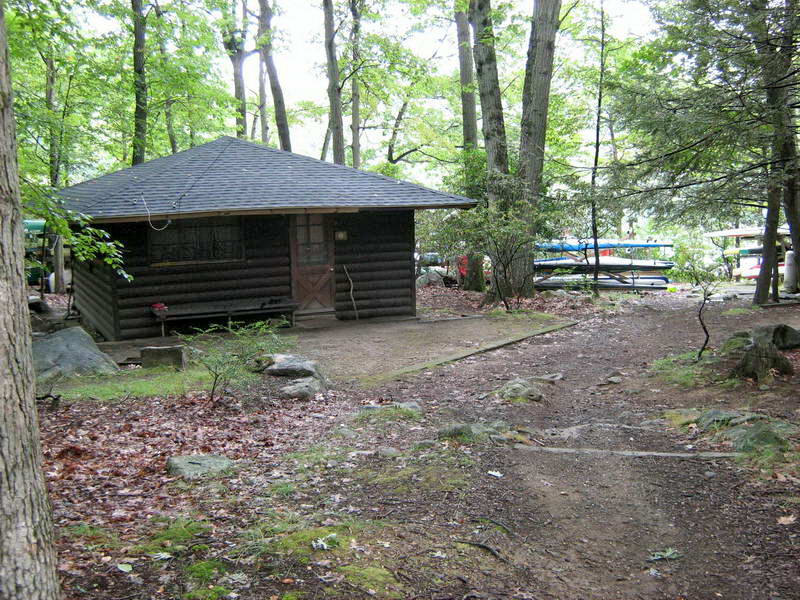 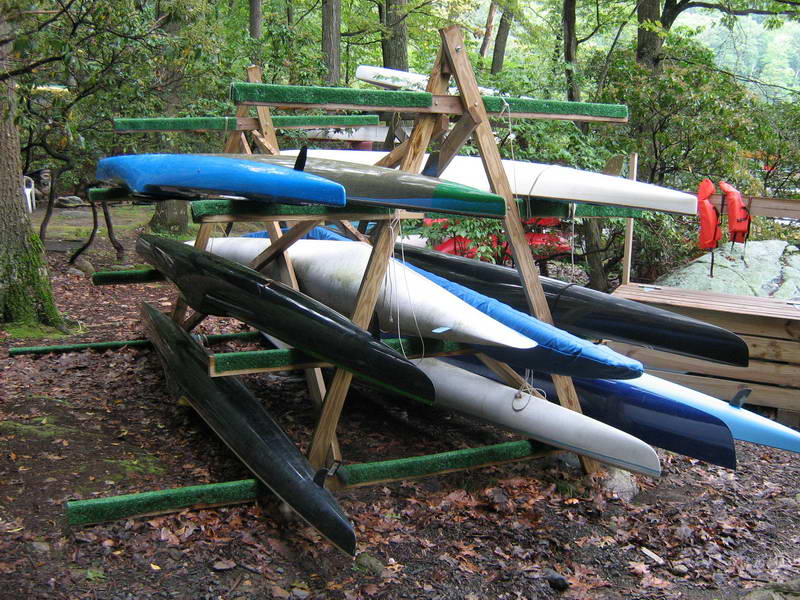 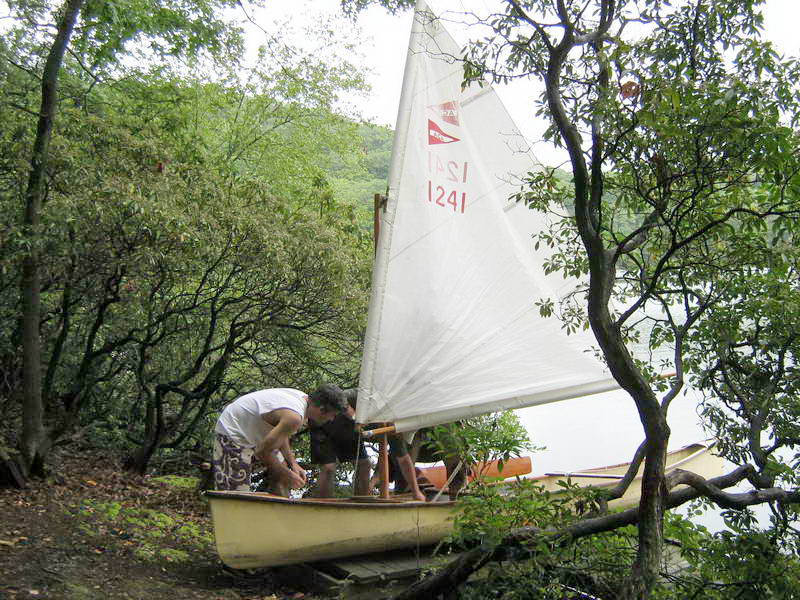 Greg rigging up. This was his first ever go at sailing these. 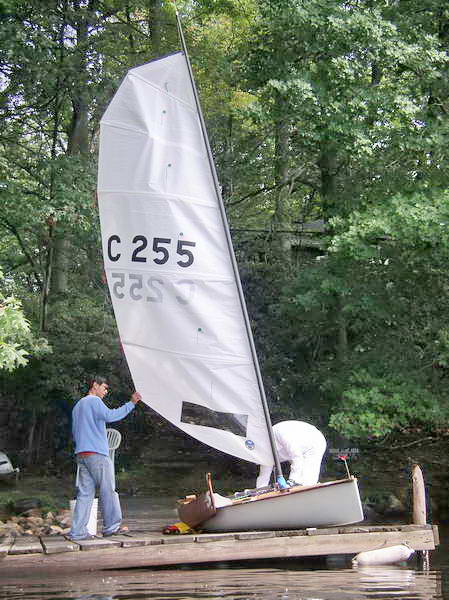 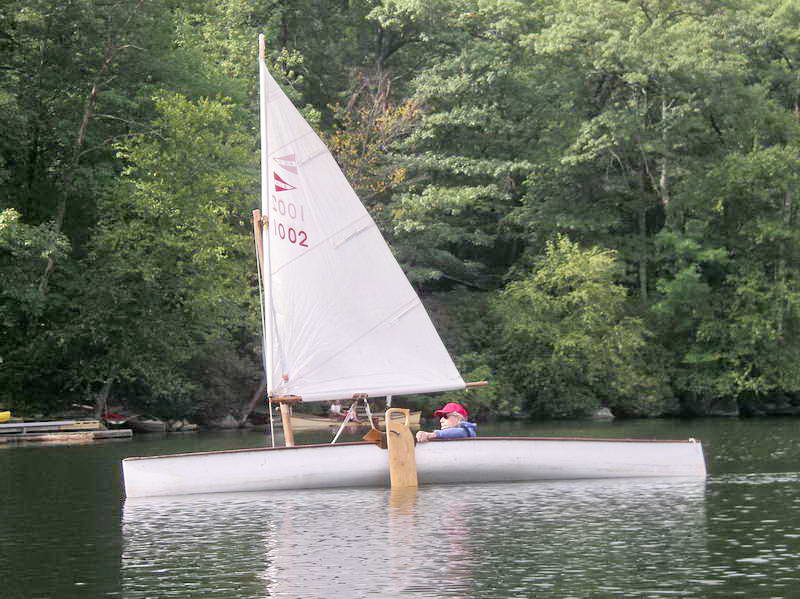 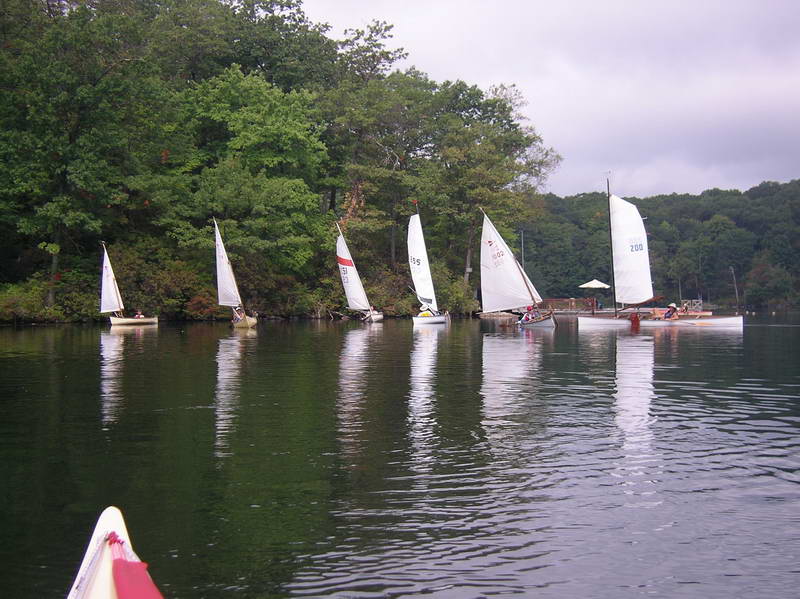 Manoeuvering before the first race. 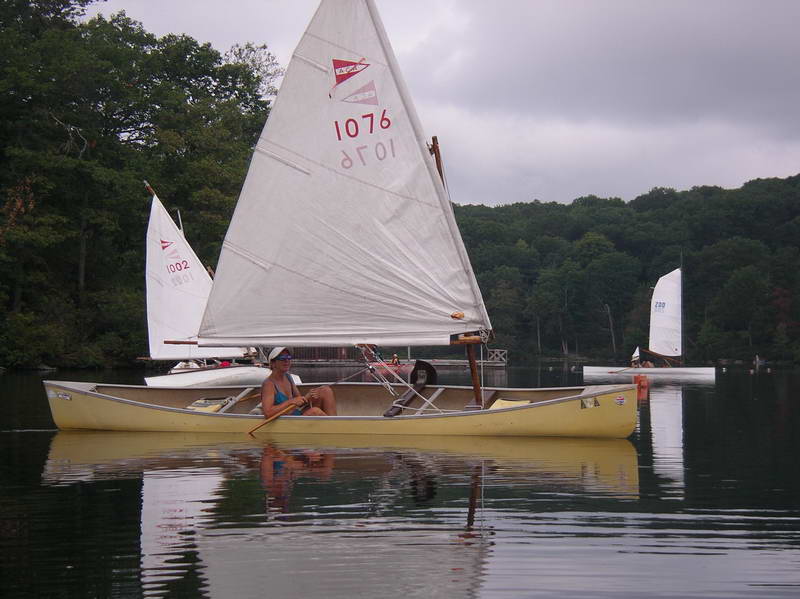 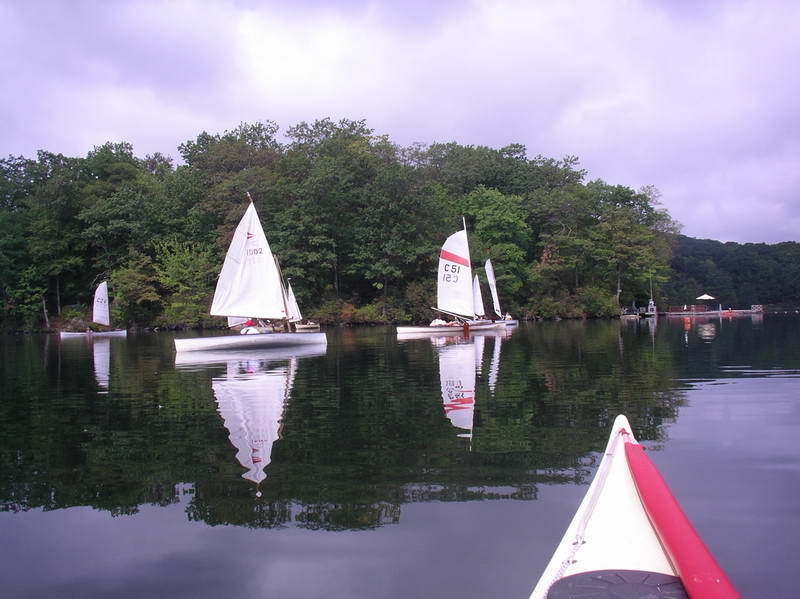 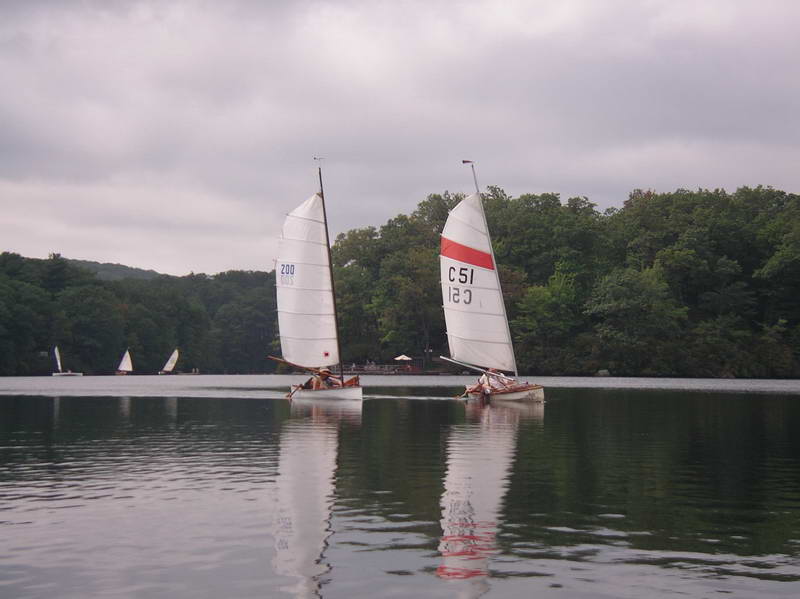 Tom Uebel and Mick Raffle cleared out from the rest. 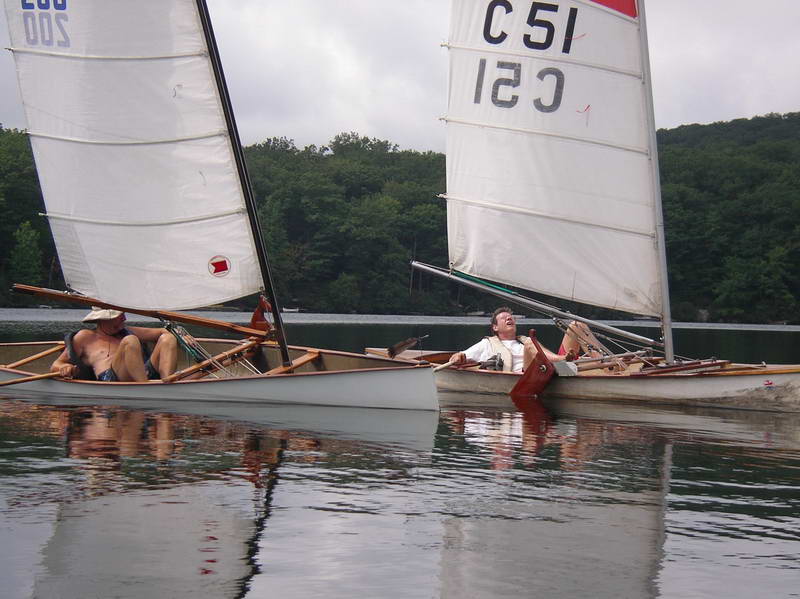 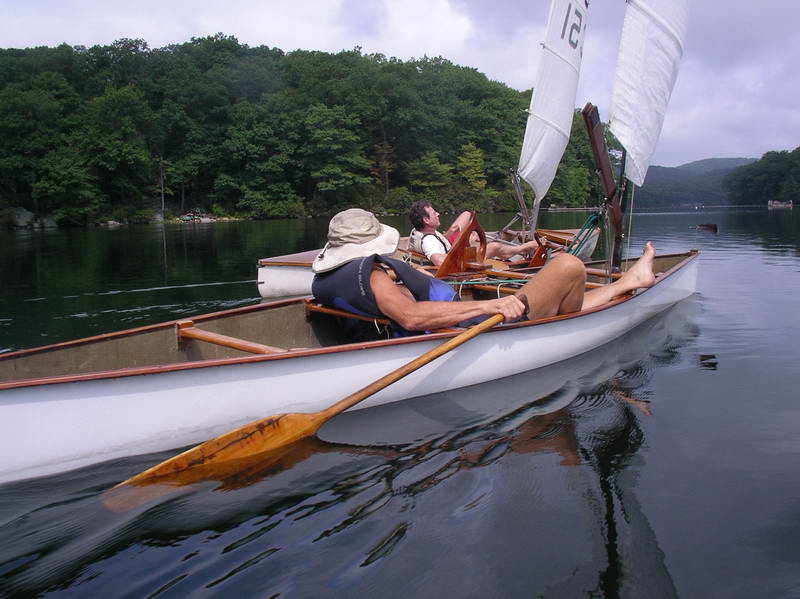 (I got growled at for being so close.) 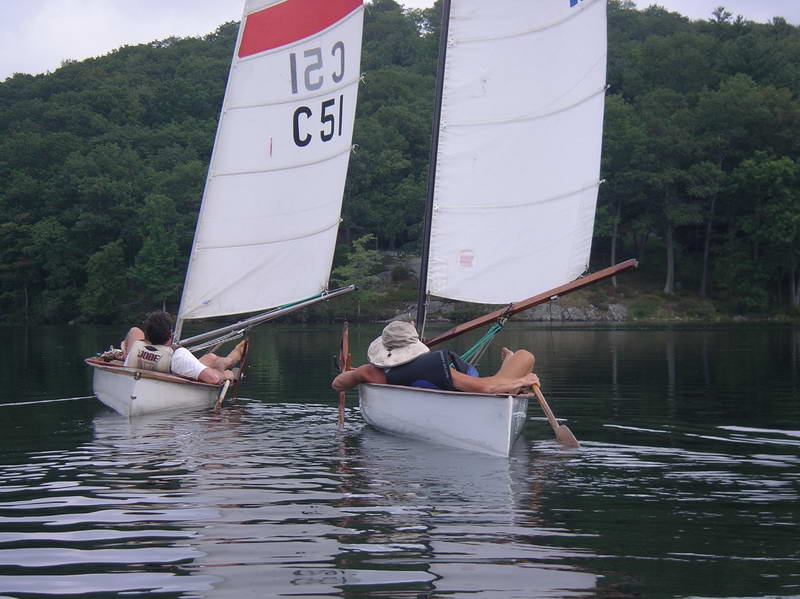 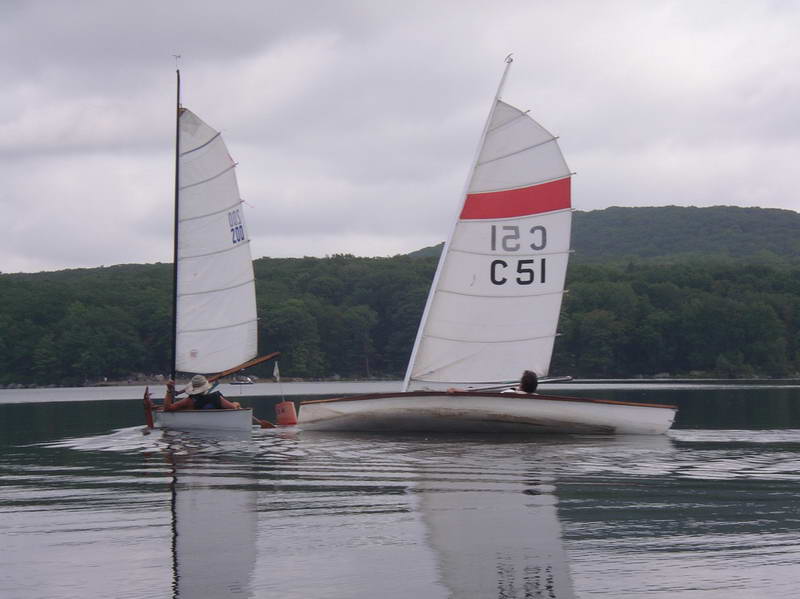 Rounding the first buoy. Tom (200) went on to win, and won the afternoon race as well. Very close between these two. 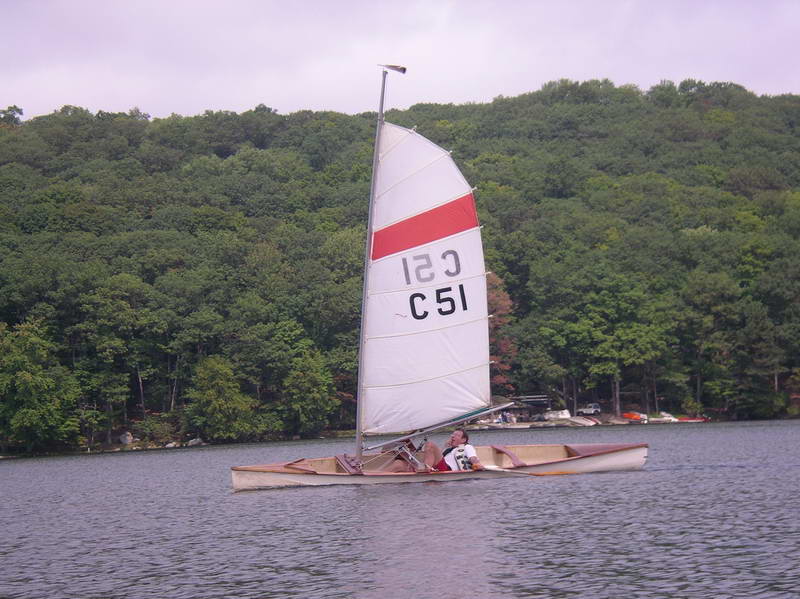 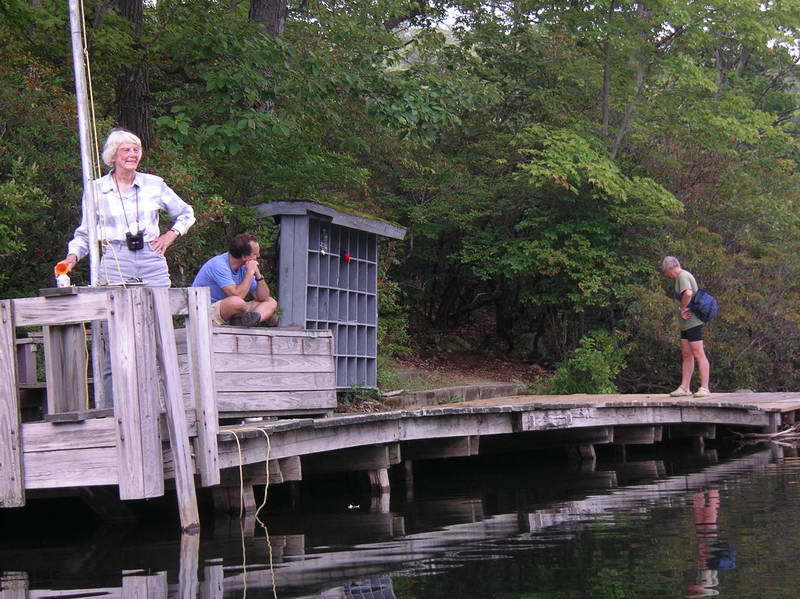 The official starter and finisher - Carol. 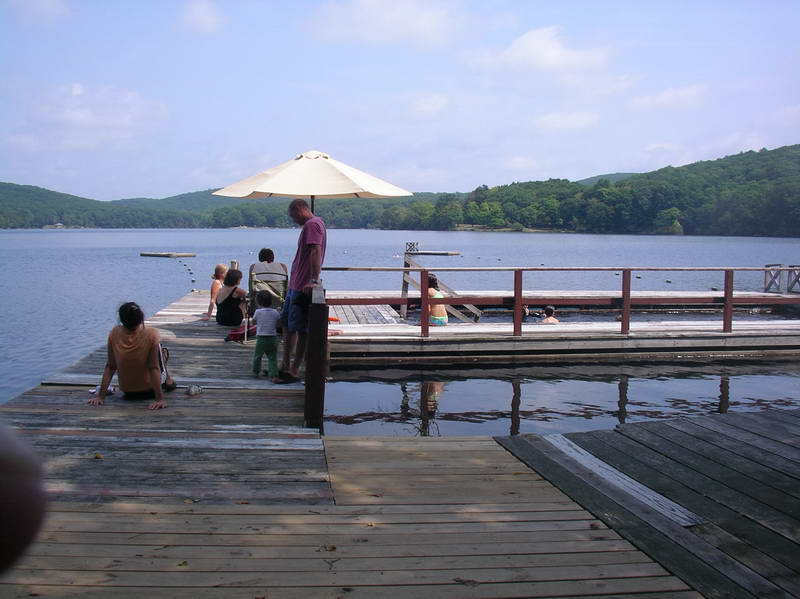 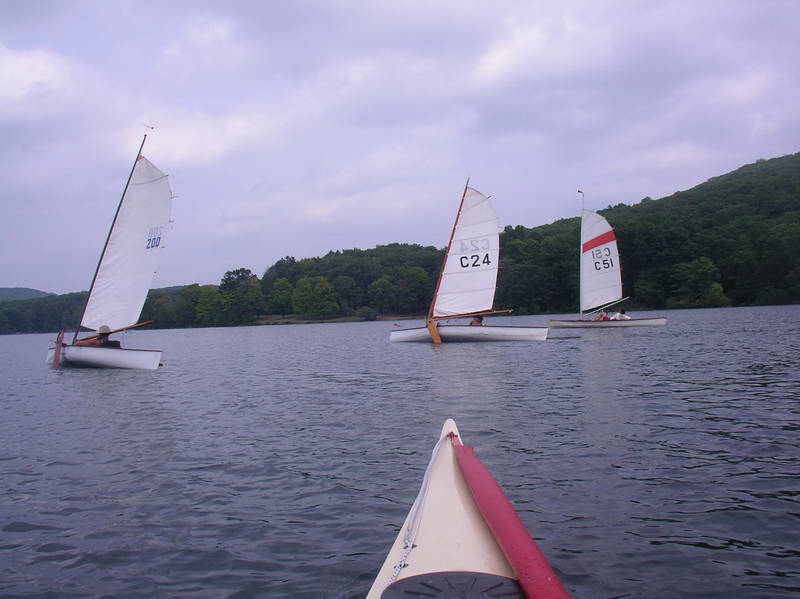 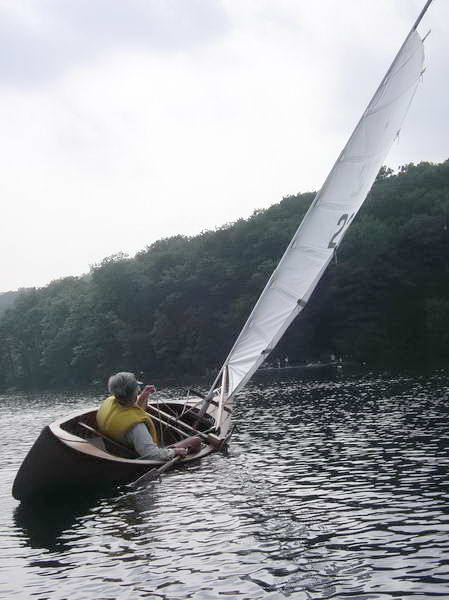 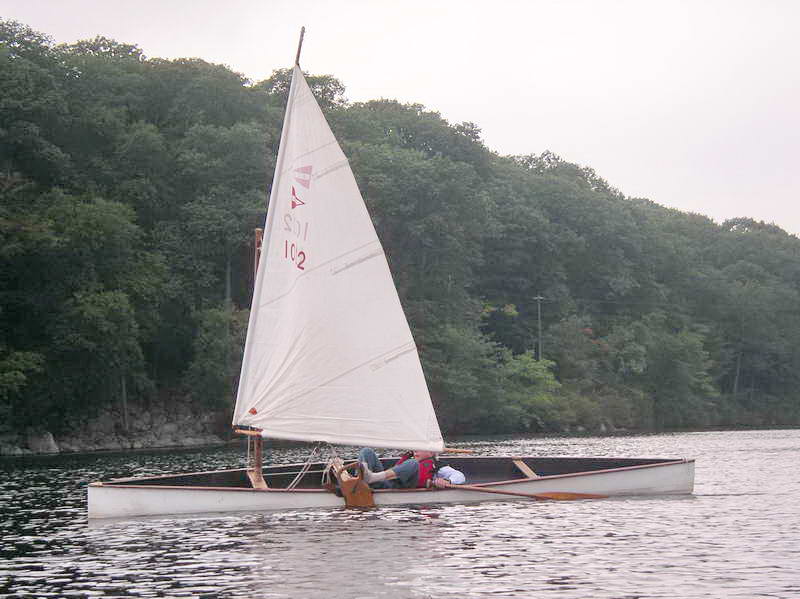 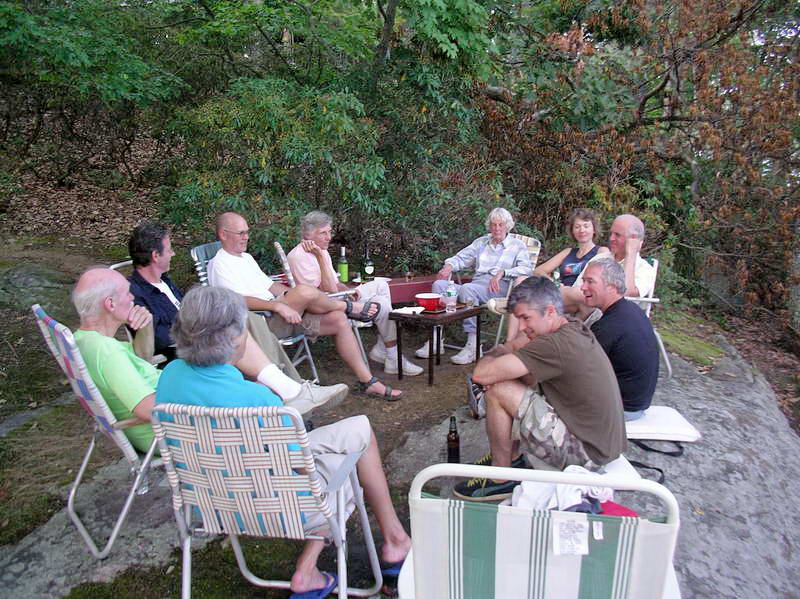 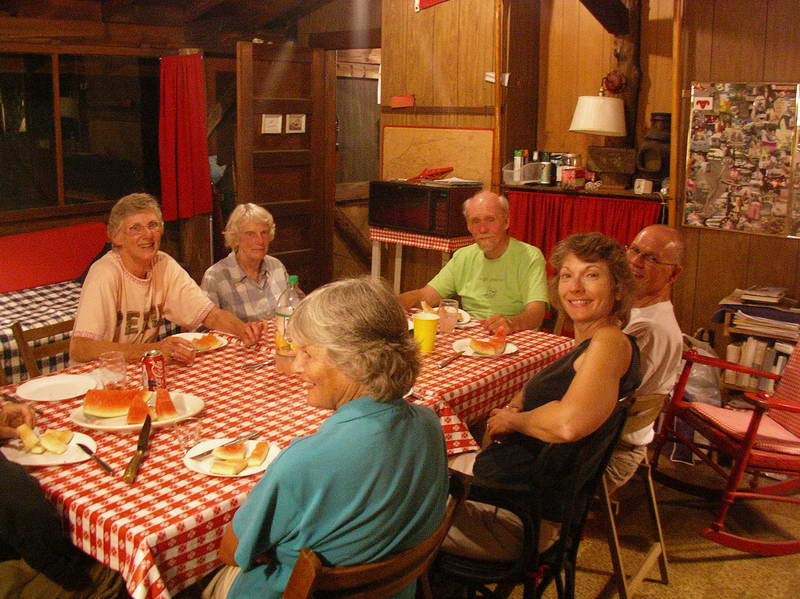 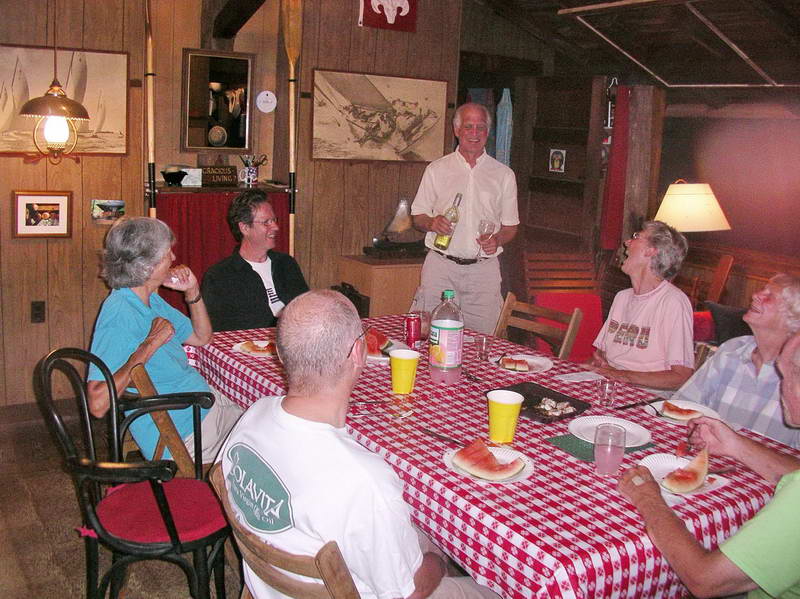 One race on Sunday morning, there was a bit more wind, but the racing was not as close for first place owing to Mick having a near capsize and getting a lot of water in his canoe. Several others went past while he was trying to get the water out. But he did make up ground and still finish second. 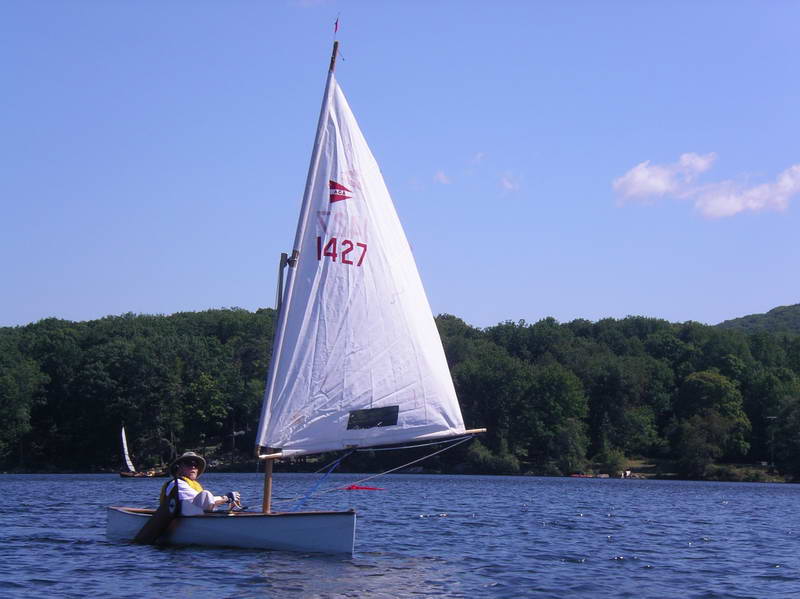 Gordon had batten trouble with his new sail so reverted to the old style for this race. Was second at this stage halfway through the race. 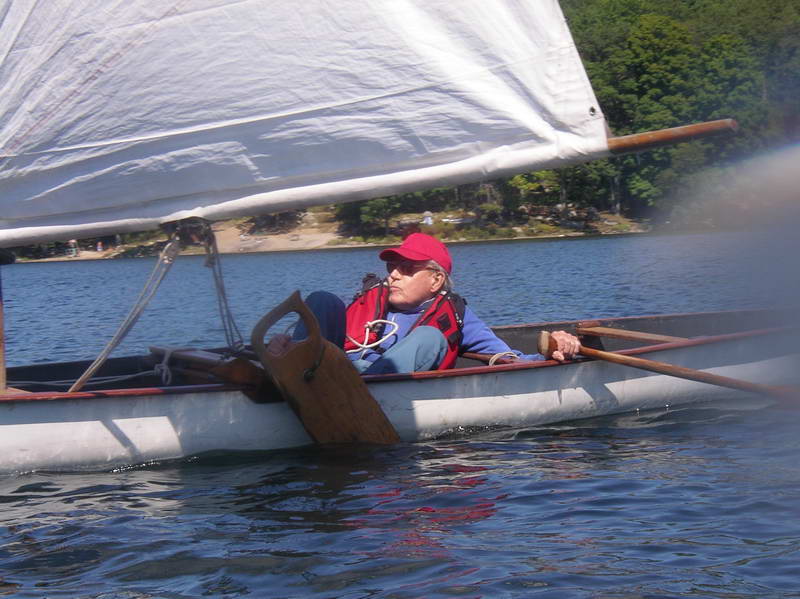 Larry Zuk - said to be the only person still alive in America who knew Uffa Fox. Finished 4th on Sunday - great performance by an 84 year old.

(Sorry about the water on the lens.)