The following has been brought to my attention. It is part of a CV of a bloke called Earle de Blonville. Parts of it are laughable.

Start and finish Georgetown: anticlockwise via the west coast and Hobart.

Media covers the Tasmania expedition itself, plus the pre-Tasmania training voyages in

Scotland and the Hebrides, plus resulting articles.

CONTROVERSY
Tasmanian police search & rescue claimed ‘local experts’ had advised that the voyage was ‘suicidal’ and that they (Police) asked for us to cancel our plans.

The ‘local experts’ was in fact only one sea kayaker, Laurie Ford, who when called by Search & Rescue Police Sergeant Maurice Massey for advice branded our trip as suicidal, without revealing he was a rival planning to attempt the first rounding of South West Cape. He feared we’d beat him to it. The Police issued no warnings to us and when we met them in Hobart, were most helpful and apologetic. Laurie Ford abandoned his team halfway through. One of his team’s boats was wrecked at South West Cape. Laurie Ford’s own boat was wrecked near South East Cape. In contrast, we suffered no damage or mishaps at all.

End of extract
.
In 1978 I had only just got into sea kayaking and was certainly not an expert that the police would have talked to - and certainly Inspector Massey never did about this matter.
I was not planning to be the first to round SW Cape (although it turned out I was - in gale conditions). Our trip was planned by Dick Holmes and Bruce Davies (both much more experienced than I was) and I was invited to take part in it. At this stage in my career there is no way I would have planned this trip myself.
.

Part of the plan was that I would leave the others at some stage as I did not have the time off work that they did. I did not abandon anyone.

My boat wasn't wrecked, it suffered some fractures - and as the weather was too bad to continue I walked out before anyone started a search for me. I walked back in a week later and paddled it out.

A condensed version of our trip report is here:

As for any circumnavigation of Tasmania back in those days it was done by Earle Bloomfield and John Brewster. (de Blonville never gets a mention) 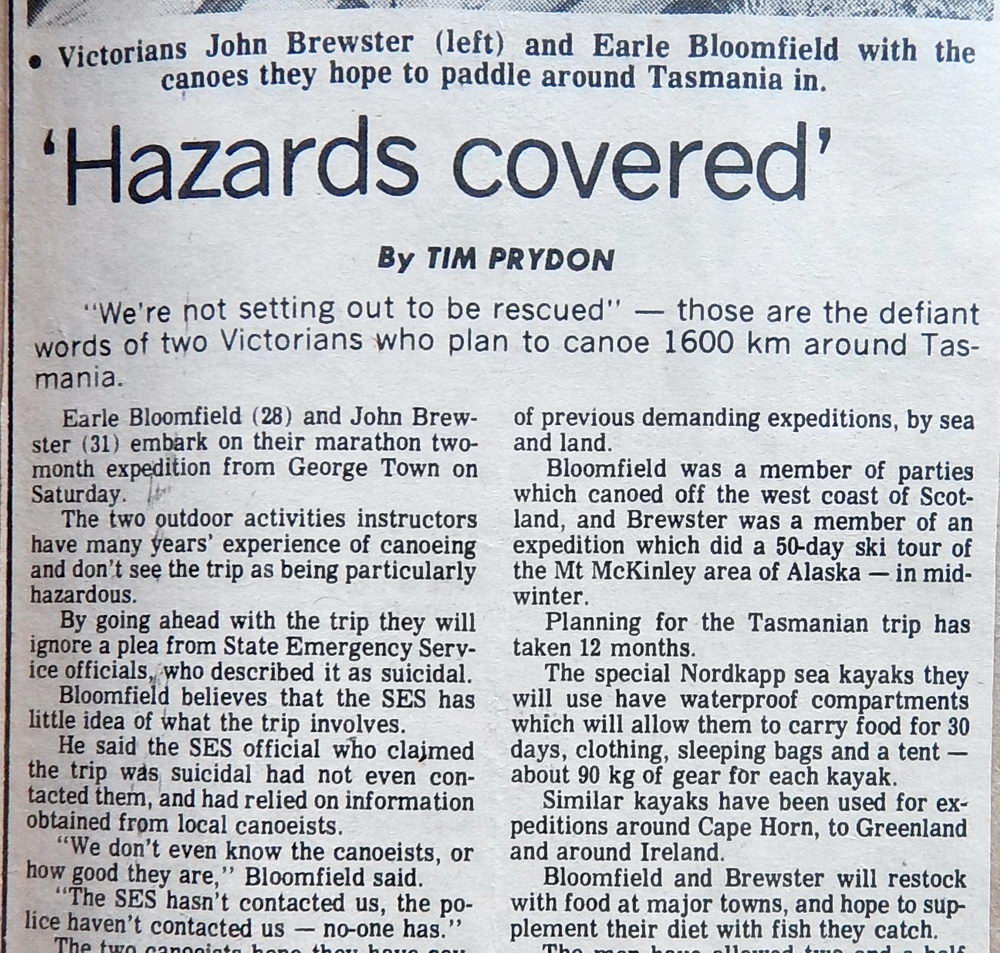 Unfortunately Earle Bloomfirld seems to be the subject of inaccurate newpaper articles. 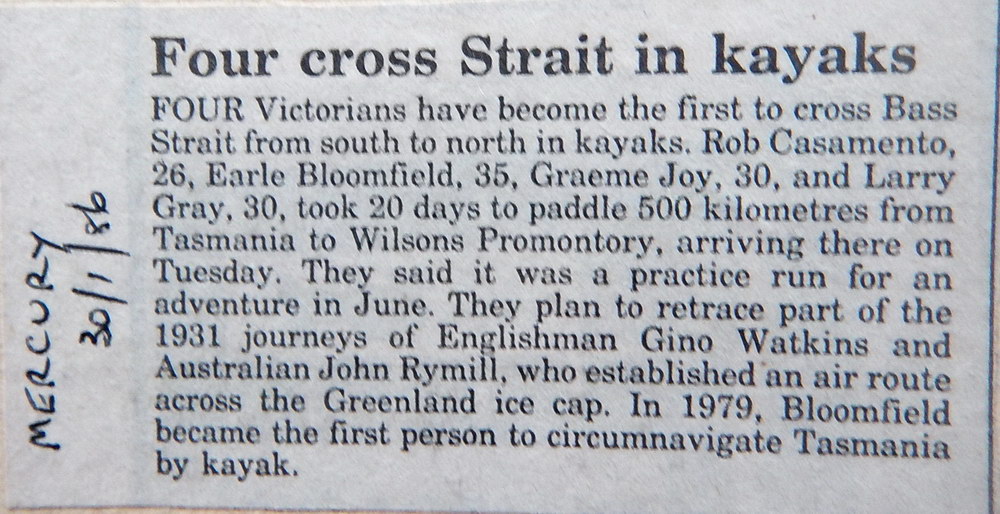 Of course everybody knew that was bullshit and I received notes like this. 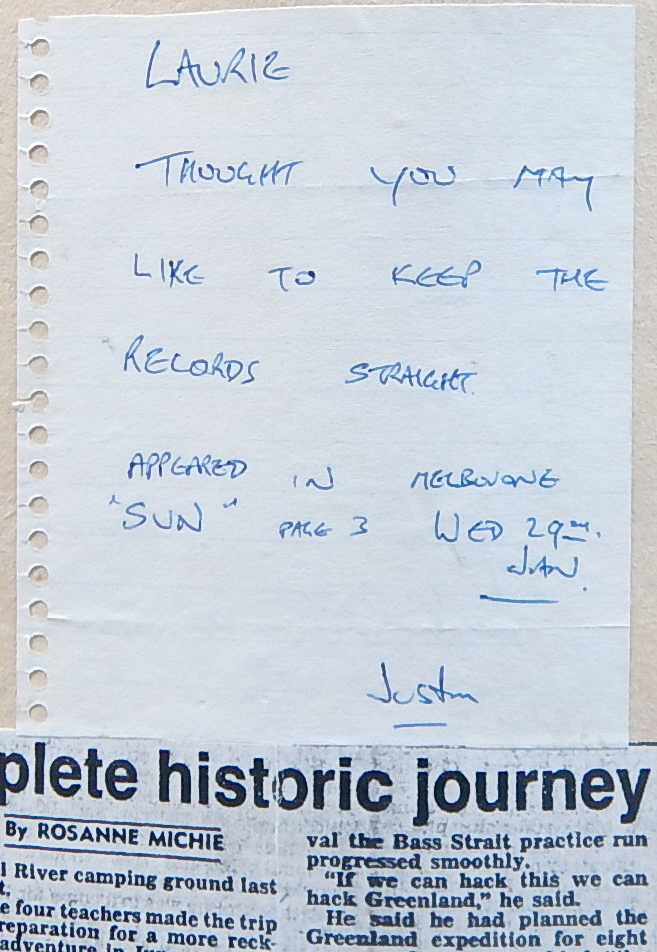 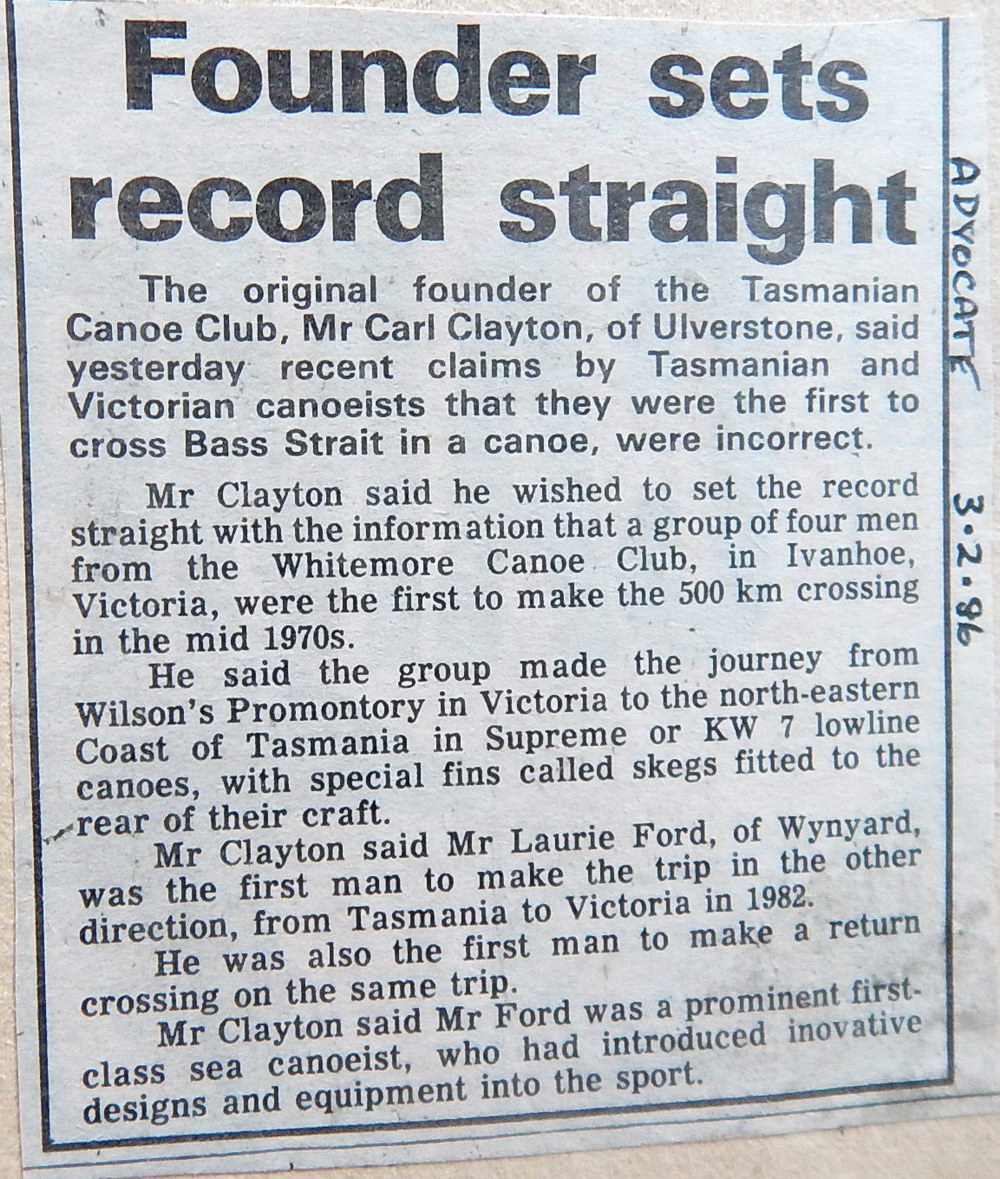 I have never had to embellish any of my trips - they stand on their own two feet, including 5 unsupported trips across Bass Strait in a kayak.

Incidentally when I see this next clipping I do wonder how much training and preparation they did.