Elli did not take up sea kayaking till she was over 60 years old. Elli never learnt to roll, or brace into a surf wave coming into a beach. Yet she paddled to Flinders Island three times, Hunter Island twice, South Cape Rivulet once - plus many many trips to Maria Island and other parts of Tasmania. She has paddled across Banks Strait 6 times - sometimes in darkness. Elli just loved being in a kayak on the water with some wind and waves. Being an American lady Elli of course paddled in various parts of America. This is a list of trips we did together over 10 years. Many years before I met Elli I made this quote “Sea Canoeing is 80% mental, and 20% physical.”  Elli is a prime example of this. She could not have passed any of the sea canoeing awards that paddlers seem so intent on obtaining these days - but she did far more paddling than most people who have those awards, including quite a bit of night paddling which she loved.

These are some quotes from trip reports she wrote:


“Those swells out in the Strait truly seemed like mountains – about 5 meters high. I was on top of a swell and looking down on Laurie in the trough and it was like looking down a crevasse. What an exhilarating ride!”

“The treat of the trip happened between the Cape and Roydon Island when seven dolphins crossed our path. Laurie said they’d play if you interact so he turned and followed them. Soon I could see them surfacing around his boat and eventually, when he turned to come back towards me, they came too! They continued on with us a couple of kms until we turned in to shore. It was like choreography as they escorted us along, surfacing on both sides and in front, passing under the boat with their white bellies up, playing along with us. It was magic when four simultaneously arched out of the water right next to the bow of my kayak.”

“We watched gannets in their incredible dives and were surrounded by hundreds of circling mutton birds after we rounded Whale Head.  The last two hours of the trip were in darkness and each of us had a red flashing bike light attached to our deck. That was all I could see of Laurie. Bruny Island light and then Actaeon light were good to focus on. By the time we could see the navigation light on Fishers Point (the entrance to Recherche Bay) the full moon was giving plenty of light despite the cloud cover and at times would break through enough to make a gorgeous moon path glimmering right to my boat. There were dots of phosphorescence as well. I absolutely love night paddling at sea. The headwind was now behind us and we even sailed for a while in Recherche Bay. We landed at Cockle Creek at 10:00pm, changed into dry clothes, opened the boot and threw everything in, had the boats on and lashed and were on our way home, getting there at 1:30am Saturday. Showers and some food. And I decided that after seven hours in the car, three hours hiking and five hours paddling all in one day, 68 isn't really old at all! It's just normal life with Laurie Ford.”

“At about 6:00pm the wind had turned the windsock on the grass airstrip (Preservation Island) from westerly to norwesterly, there were no more whitecaps to be seen way out in the Strait, and the air felt milder. We decided that this was the moment. The tide was at full. We were underway in ten minutes and soon were enjoying mountainous swells - when they are not breaking the bigger the better! Two sails up in slight wind all the way across. At 8:00pm the sun set as a great ball into the waves. Lingering evening light and peach and mauve colours. Then the half moon began shimmering on to the waves. Just on dark the sea had settled and there were no more swells. We watched Swan Island light and the “loom” of Eddystone Light. We saw the lights from squid boats out further to the east. And an occasional bright light on the distant shore ahead. We could see each other easily in the moonlight. We headed magnetic south by our compasses and were taken just right by the tide to end up at Little Musselroe where we could see the inlet through the beach. Laurie had mentioned that as soon as we lost sight of the lighthouse on Swan Island we would be entering an ‘obscured sector' and must be at Little Musselroe Bay. Tide was at its prime pouring out and while Laurie went in fine I had trouble pulling against it and got out to pull my boat around into the bay, (my second dowsing) got back in and paddled a dozen strokes across to the boat ramp. It was 10:40pm. This had been a glorious day of app. 42k. We put the tent up right there on the grass and  next morning talked with Liz Ponting in the end house and signed her paddlers book. I think I may be the oldest woman to paddle across Banks Strait - at 63 - I'm certain I'm the oldest American woman to do it! Now that's fun.”


This page was basically so that Elli's family and friends back in USA could follow her activities on the water, and in outback Australia. Elli spent at least 6 months every year in Australia - paddling a sea kayak in the Summer months, and driving round most parts of Australia in the Winter months. And sometimes a bit of bushwalking (hiking). 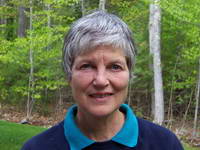 The love of my life, Elli Tappan, passed away on the 10th March, 2011 in the Royal Hobart Hospital (Tasmania) after a short battle with Leukemia, pneumonia, and sepsis.


Elli, at the age of 71, sailing in her Greenlander off Hunter Island.