Thank goodness for an electric bilge pump. I switched it on frequently during the 4 ½ hour paddle back from South Cape Rivulet where I had crash landed days before, leaving a couple of stress fracture in my kayak's hull. I'm not sure quite how I would have managed without it as I wouldn't have wanted to be opening my spray deck to pump or sponge manually so frequently out there.

We had driven down to Cockle Creek Sunday, Feb 25th with the possibility of going to Maatsuyker Island, and maybe further. We packed up with food and fluids for ten days and were on the water at 7:00 Monday morning for a delightful paddle down around Whale Head. When we came around South East Cape we were met by a light head wind and fairly large swells running (3 metre SW). 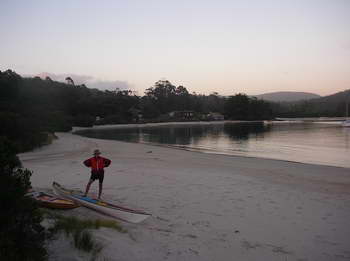 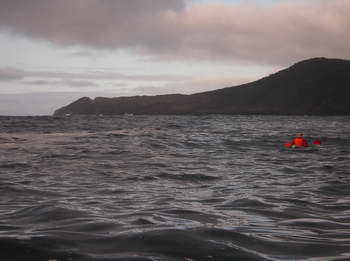 No worries thought I. Slow and steady for six more hours to Deadman's  Bay – I think I can. That would be a 50k day and I've done a couple of 45s before. The trouble is that I forget that I am getting old!

About half way across that large distance to South Cape we decided that we would truly be buggered by the wind and distance and would go in to see how the surf looked at South Cape Rivulet as an alternative. If it didn't look manageable we would go back to Cockle Creek. 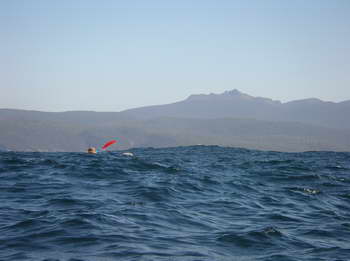 In the middle of South Cape Bay

We eased in to the surf zone at the ‘quietest' western end of the beach, back paddling, moving forward, till Laurie shouted Go Now. The timing was close to perfect but just at the last moment I got hit and capsized, popping right out of the boat, feeling my paddling shoes coming off, and then being tumbled around by a couple more waves before I got my feet in waist deep water. The boat was upside down at the shoreline by then, one sail holder torn off the deck - and the paddle was bobbing along coming in behind me in the surf. 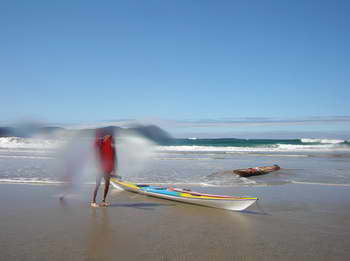 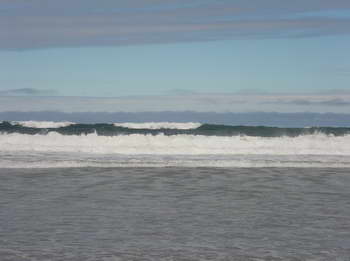 We collected my hat, the paddle, one of the sail tubes, and my coke bottle and the one we had filled with port, from the beach as they showed up. Then pulled and paddled the boats up the creek to the camping area where we settled in. 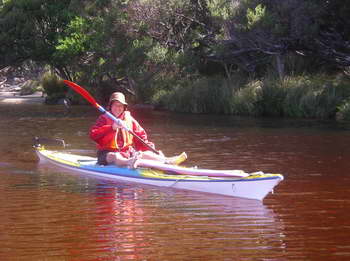 At 2:00 we raised a glass of port to Andrew McAuley, knowing that the memorial service for him was taking place at South Head lighthouse in Sydney at that same time. We talked about his incredible feat in paddling right from Fortescue Bay to Milford Sound, New Zealand. 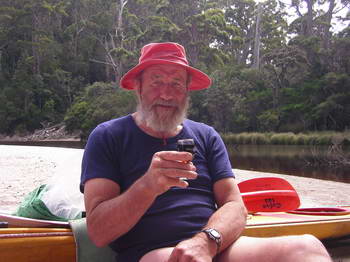 Toasting Andrew McAuley
I love to watch Laurie mending things. He restitched the broken mouth of the sail tube and it's torn bow end. Straightened the mast of the sail. Scraped gel from the big fracture and applied good old gray tape (it was only when we got home we noticed a very small fracture as well). Sloshed water through the rudder to flush out sand and get it moving again. 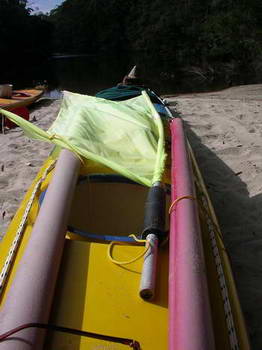 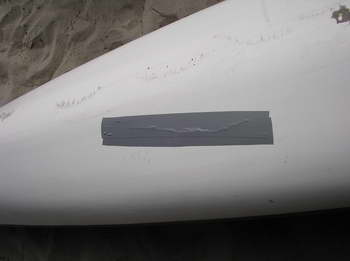 The next day the surf was really getting up and that evening a fancy cruiser dropped off two surfers and they played in ‘our' surf area for a couple of hours until absolutely right on dark. We enjoyed the lazy day, talking with hikers and hearing about their experiences on the South Coast Track, including being helicoptered away from the button grass fire area. I paddled up the rivulet to see where it goes. Bird songs and ducks for about a kilometre before it just ends among watery bushes.

During the day while sitting quietly in the campsite reading, after all the bushwalkers had moved on, we were surprised to see a Tasmanian Devil sniffing about the campsite. Later on it was walking along the beach and Laurie got a photo of it swimming in the rivulet when he cornered it on a sandy point. Another highlight of the day was finding a Hooded Plover's nest in the middle of the big sandy area encircled by the rivulet. Although there were dozens of bushwalkers at the campsite while we were there for two nights none of them noticed this, even though some walked within a metre of it. 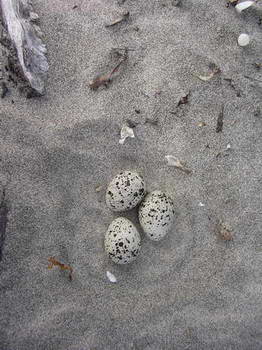 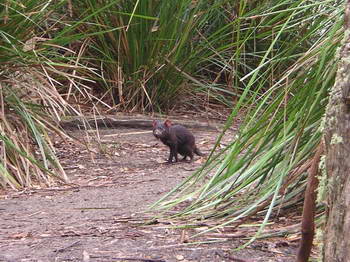 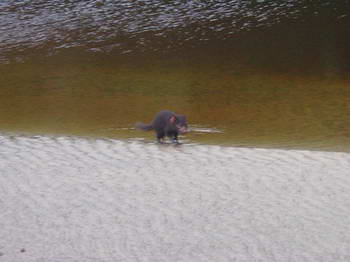 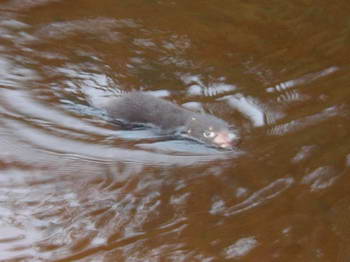 One of the walkers camped next to us was an Irish sea kayaker – Mick Murphy - trekking the south coast track with his wife. Mick is one of the small number of paddlers who have circumnavigated Ireland. He was interested to inspect our sails.

On Wednesday two surfers hiked in and were already enjoying the good surf at 8.00am. This was definitely not a good omen for us! We thought the surf had settled down a bit about the middle of the day so packed up, dragged our boats out, stood there with mine ready for Laurie to give me a huge push. But there was no break in the big waves and he wasn't sure he would get out either so we gave it a miss, put the loaded boats up into one of the camp spots, and walked out to the car. Got a hamburger at Dover, and went home to Dodges Ferry. 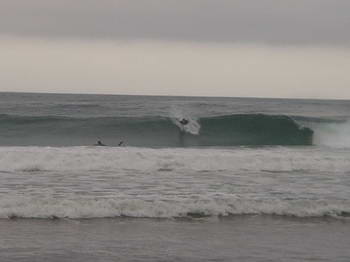 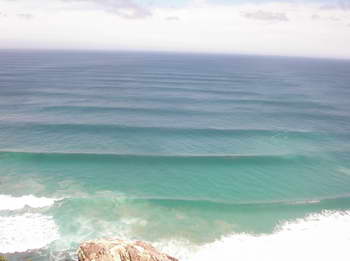 Thursday night we went to the Uni to hear Andrew Hughes' excellent slideshow and talk about his paddle from Hobart to Cape York. And strangely enough we met Mick Murphy and his wife there as well, they had got a lift to Hobart with the caretaker of Dover School – one of the schools involved with Andrew's paddle.

And on Friday morning we drove to Orford to meet and chat with a group of five blokes who had just paddled across Bass Strait from Wilsons Prom to St Helens.They are hoping to continue on to Hobart if time permits.

Laurie had estimated that Friday's weather report of low swell on the South Coast meant we could give it a go so we drove back to Cockle Creek, started hiking at 2:07, got to the Rivulet at 4:45 and were successfully through the much smaller surf at 5:25. Again we had a slight head wind but it felt wonderful to be on the water and underway.

We watched gannets in their incredible dives and were surrounded by hundreds of circling mutton birds after we rounded Whale Head.  The last two hours of the trip were in darkness and each of us had a red flashing bike light attached to our deck. That was all I could see of Laurie. Bruny Island light and then Actaeon light were good to focus on. 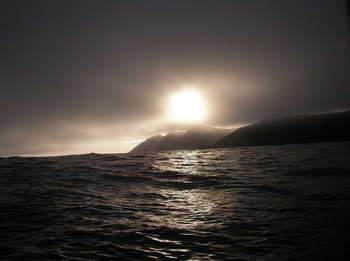 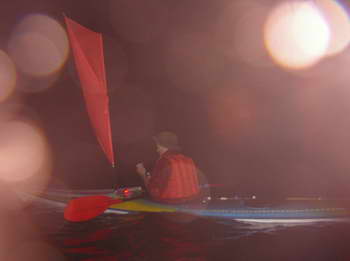 By the time we could see the navigation light on Fishers Point (the entrance to Recherche Bay) the full moon was giving plenty of light despite the cloud cover and at times would break through enough to make a gorgeous moon path glimmering right to my boat. There were dots of phosphorescence as well. I absolutely love night paddling at sea. The headwind was now behind us and we even sailed for a while in Recherche Bay.

We landed at Cockle Creek at 10:00, changed into dry clothes, opened the boot and threw everything in, had the boats on and lashed and were on our way home, getting there at 1:30am Saturday. Showers and some food. And I decided that after seven hours in the car, three hours hiking and five hours paddling all in one day, 68 isn't really old at all! It's just normal life with Laurie Ford.