Tuesday 30th July, 2013:   Laurie went off for a final shopping trip for biscuits and coke in the morning, and we drove over to the Æbelø car park about 4pm. 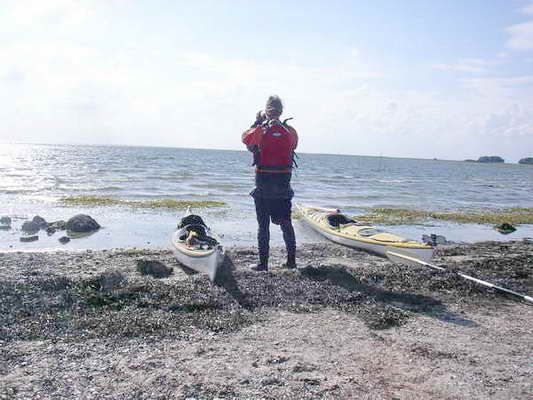 Quite a strong wind – SW – which would help us along the short paddle to Æbelø Island and find a camp spot, although Bente wasn't sure you were allowed to camp on the island. In one place she didn't follow Laurie close to shore and he went out to the middle of the bay and put the tow line on her and with the sail up we stormed along (without paddling) to the place where we intended to camp. Found an ideal spot right on the shore and put the tent up. Only a 2 man tent and very hot during the night but there is a heavy dew and 12mm rain predicted early in the morning so really couldn't leave the tent open. 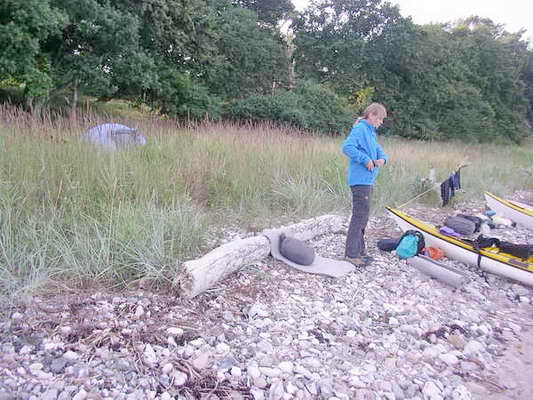 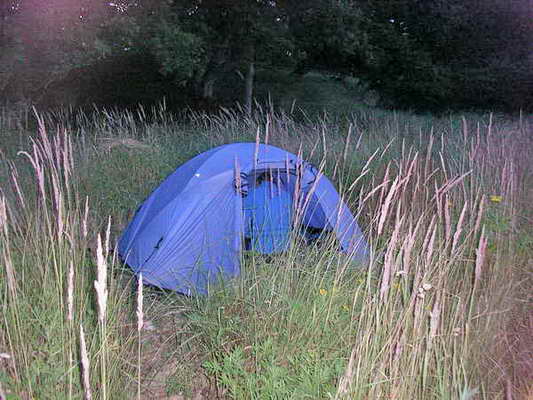 Wednesday 31st July, 2013:      Left about 9am and the first half hour or so was OK. Then the wind freshened a bit and Bente's kayak kept trying to round up into the wind – weather-cocking. It was tiring her out trying to keep it straight so Laurie told her to steer the most comfortable course she could. This happened to be straight downwind and we would have missed Endelave Island by a few kms so he put the tow rope on her, more to keep her heading in the right direction than to actually tow her. 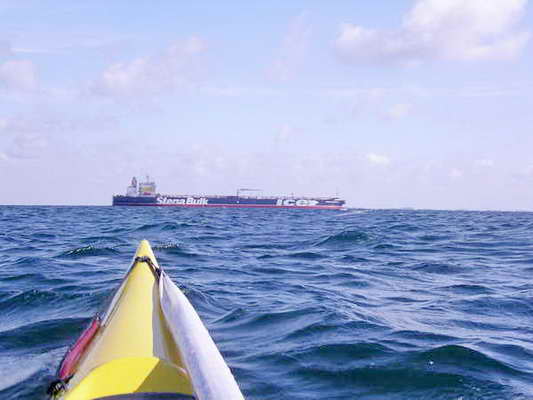 Bente paddled all the way, and of course Laurie put the sail up because the wind was just right, and he let the sail do most of the work.

After 2 ½ hours we weren't going to get round the western end of the island to the proper camp ground so Laurie went straight in where we were – looking for large bushes or trees for shelter out of the wind when we got ashore. Now we were running directly before the waves and Bente's kayak would surge forward down a wave and the tow rope would go slack. Then Laurie would surge down the wave and the tow rope would snap tight again, but the shock cord in the tow rope took any jerk out of it. The place he picked to land just happened to be at the end of a lane with a hedge on either side. We got into dry clothes – a bit tired but glad to be here. After a cup of tea and a rest we ambled up the lane, thinking it was the one we had on our map, downloaded off the web. There was only one lane that went across the island to this shore. It was 1 km to the town. 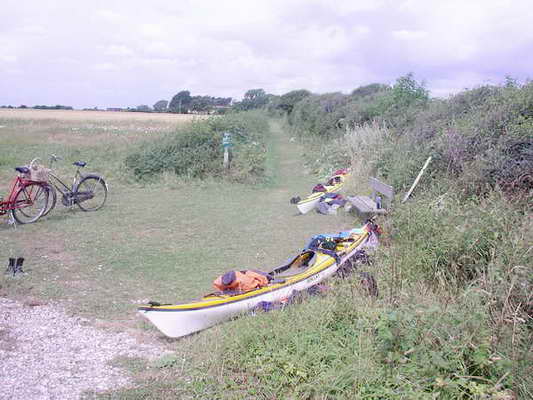 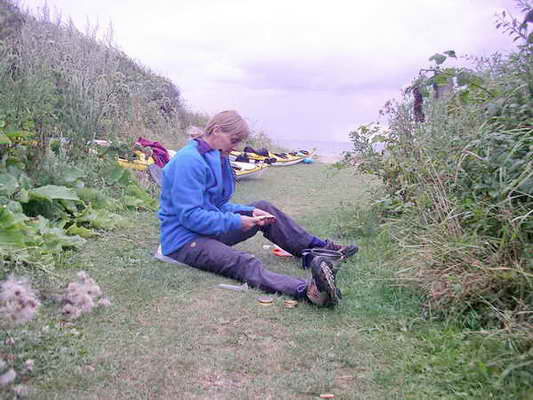 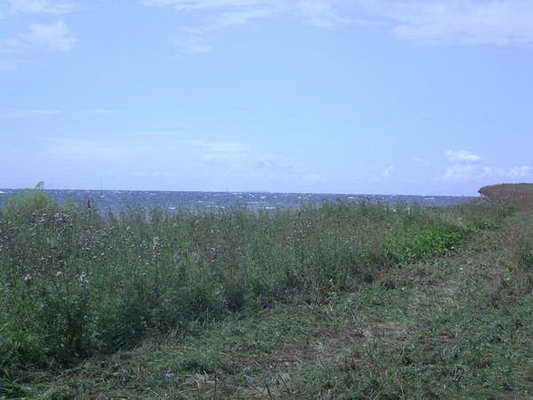 Our lane turned into a field which looked like it was a boy-scout camp ground, but then Bente noticed the sign that indicated it was one of the free ‘primitive' camp sites that many islands round Denmark have. Just a plain field where you can camp – may or may not have toilets or other facilities. On some islands where the camp site is away from the shore they provide trolleys so that you can wheel your kayak to the camp site, but not here. We had no idea there was one of these campsites on this island. Right next door there was a restored farm and a lady had a sale of T-shirts and a lot of other stuff out in the yard. Bente had a long talk to her and she did offer to lend us bikes. We still thought it was only 1km to town so declined. But we weren't where we thought we were and it was 3km into town. Had an ice cream and looked at the wharf and the drive-on ferry, then made our way back to the kayaks. 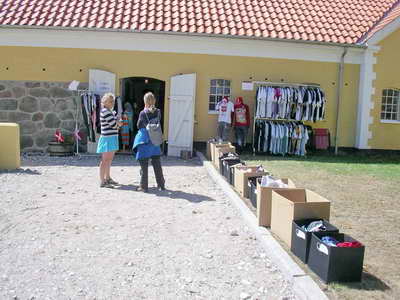 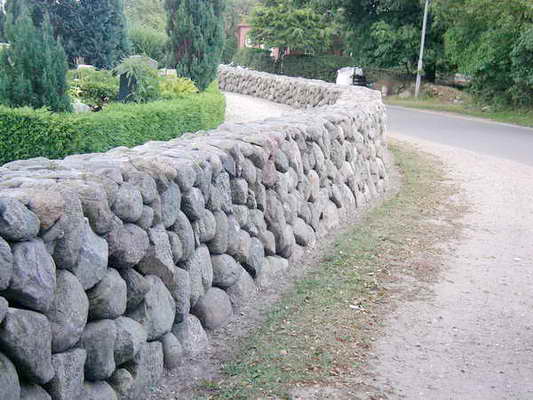 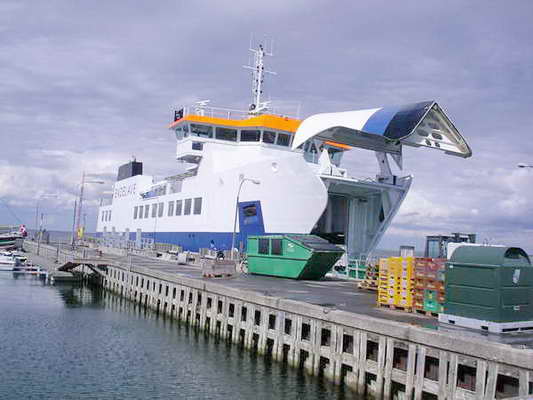 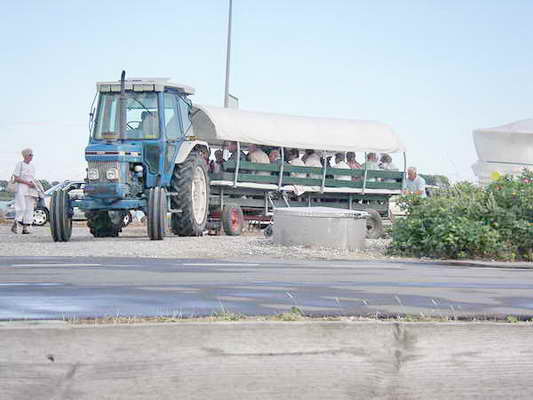 We carried the tent and sleeping gear up first, then food later. Laurie set up the tent, and the tent fly. Bente immediately took a liking to the tent fly so we slept under it the next 2 nights. Bente used the tent as a store room. 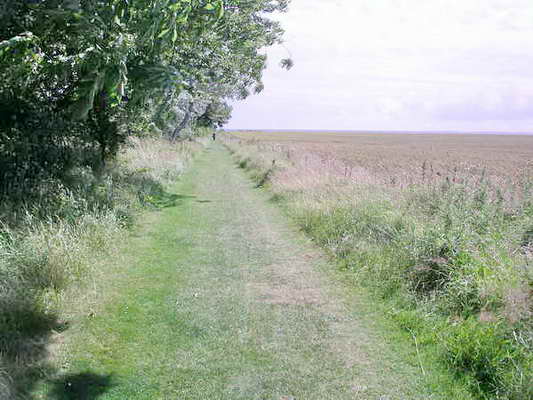 It was a long laneway back and forth to the kayaks

It was a good camp site – 4 toilets (even if they were just seats on buckets, and a lot of wood shavings to put in them), a shower (but the gas cylinder had run out), a good large cooking shelter, several picnic tables and a couple of fire places, one with scraps of timber left over after some building project.

In view of the problems Bente had with her kayak coming over we began to wonder whether she was going to be able to paddle back again – and we started to consider other options just in case. Laurie had said before the start that there are no time limits on sea kayak trips – you may not always get back on the day you want to due to weather conditions, or other circumstances. But Bente really wanted to go to a christening on Sunday at Aarhus, so needed to be home by Saturday. The christening was for Liv's first born – Bente being Liv's Godmother, and was basically the midwife when she was born owing to the late arrival of the real midwife.

There were 2 options (discounting any thought of Laurie towing her all the way back). The people with the restored farm house had a clothing factory at Kolding – and he commuted there by helicopter, and said the cost of running a small helicopter was about the same as running a company limousine. If they were agreeable then it would only take a few minutes to fly Bente back to the car – Laurie being able to paddle back easily with any of the forecast conditions. We could get the ferry across at some later date to pick up Bente's kayak. The other option was for Laurie to paddle back to the car and drive it to meet Bente who would get the ferry.

In fact late one evening the helicopter went off but returned within about 15 minutes – we thought he may have just nipped across to Bogense for fish and chips for tea. 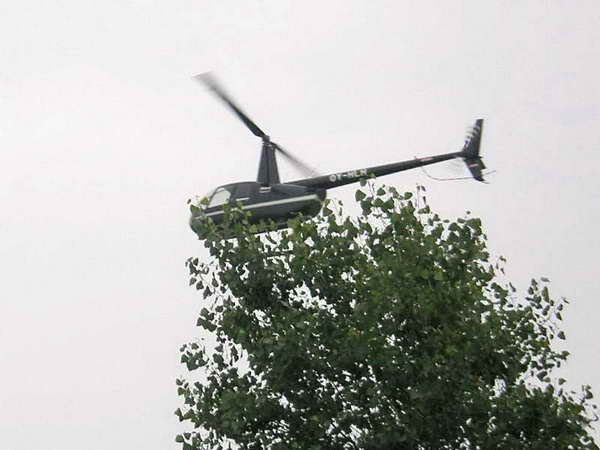 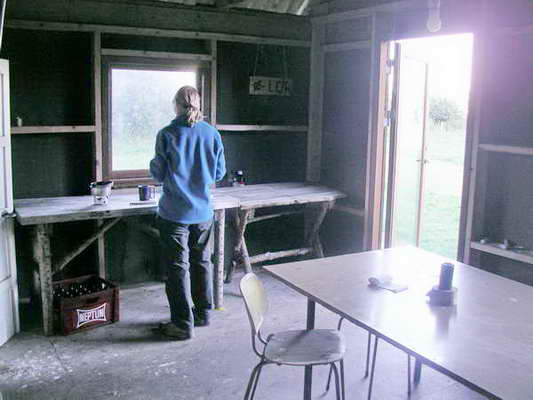 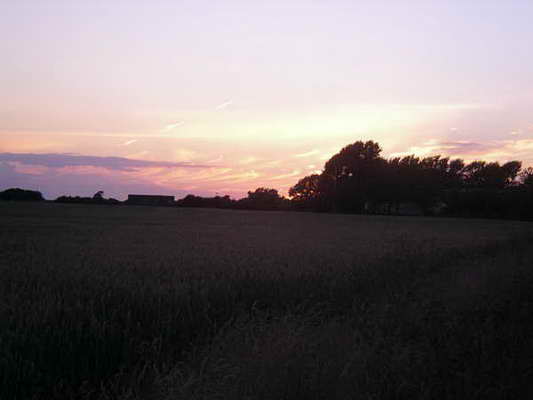 End of a windy day 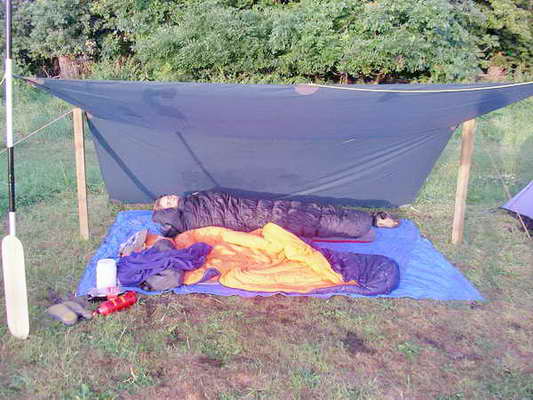 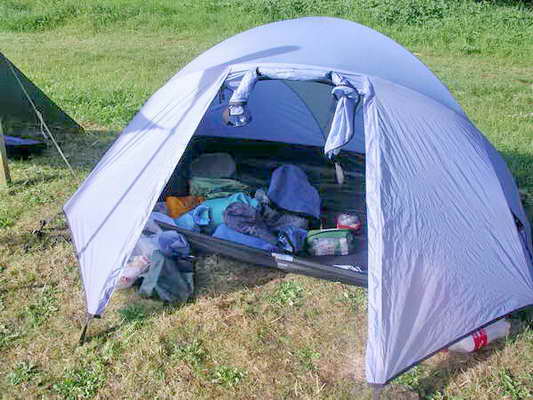 It was dead calm at 6am, but the wind got up about 8. We decided not to do anything strenuous today, but rest up for getting home again. We cancelled any trips out to look at the seals as obviously we will be back again next year – when Bente will have the Sea Leopard kayak to paddle. We did see one seal pop his head up just as we were landing yesterday – to welcome us to Endelave. Gloomy day and showered on and off and Laurie had to re-erect the tent fly so that rain didn't drive in under it when the wind changed direction 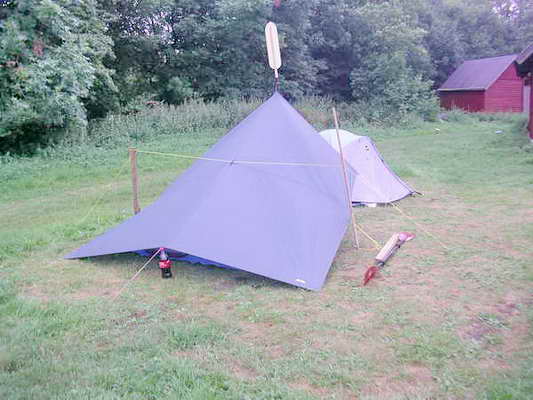 We spent quite a bit of time in the cooking shelter, with occasional forays down to the kayaks to look at the sea conditions. Decided to try for an early start Friday morning – like 5am – if it was calm again like it had been this morning. Late in the afternoon the Harbourmaster rode through the camp site on an Icelandic horse, accompanied by his dog. He got off and said “You found my campsite OK then?” and talked to Bente for quite a while, and told us the campsite was only 2 years old but you could also probably camp anywhere on the island and no-one would object. He said he still had some clearing up to do after their first ‘island' camp, and said the shower should have been hot. He paddles himself and regularly on Wednesday evenings they paddle out to look at the seals. He is off to Iceland shortly to help bring the sheep down, and then staying on to help bring the horses down. Obviously they must have summer pastures up in the mountains – similar to the Victorians in Australia taking their herds up to the high country during the summer. 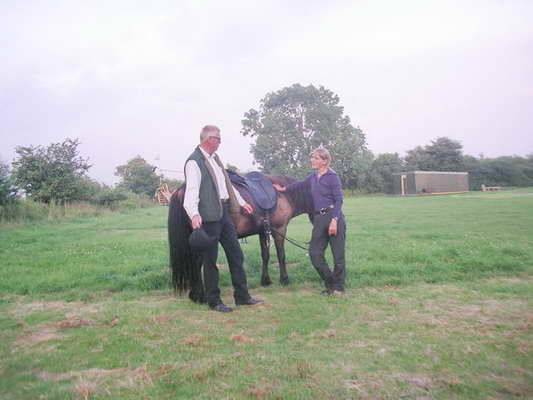 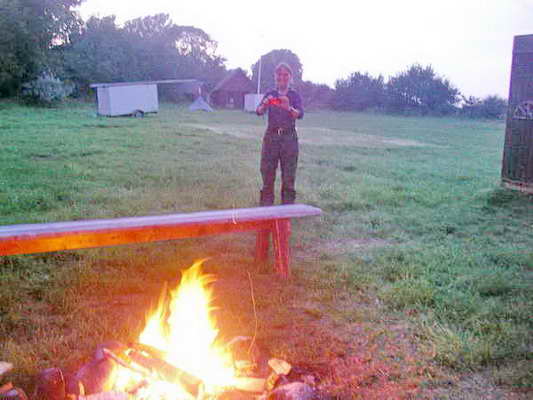 We took all unnecessary gear back down to the kayaks ready for the early start tomorrow.

Friday 2nd August, 2013:    Laurie was awake at 2am and it seemed pretty quiet. He got up about 2.40am and packed up his sleeping bag and sleeping mat and got into his paddling gear. Took the stuff down to the kayaks and had a good look at the sea. The wind was extremely light – 2 or 3 km an hour maybe, and was southerly which was exactly where we wanted to go. This meant that Bente wouldn't have any trouble steering even if it increased a bit. He woke her up at 3am and she went into the shed to start getting ready while Laurie packed up her sleeping stuff and took the tent fly down.

Laurie was ready to go at 3.30am but Bente wasn't and it was 4.15 before we actually got on the water – quite dark but we could see each other 150 metres apart fairly easily. Laurie told her to paddle straight into the wind and waves and keep south – but she could barely see her compass which was right near the front of the kayak. Laurie could just see his hand held one under the shock-cord so off we went. 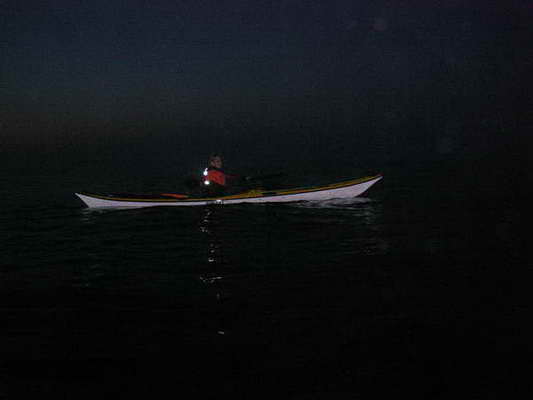 About 5.20 the sun started to peek through the low cloud that was all round the horizon and it was a great feeling to be out there in such pleasant conditions. 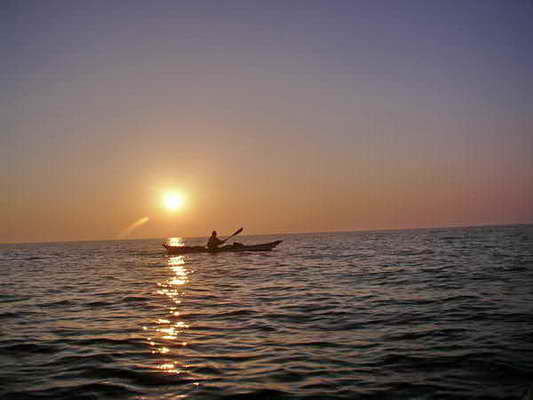 An hour and a half later we still couldn't see any land because of the cloud but then saw a bit of land slightly to our left. We headed for it but when we got a bit closer realised it wasn't Æbelø Island which we were looking for, and then saw Æbelø fade in and out through the cloud to our right. 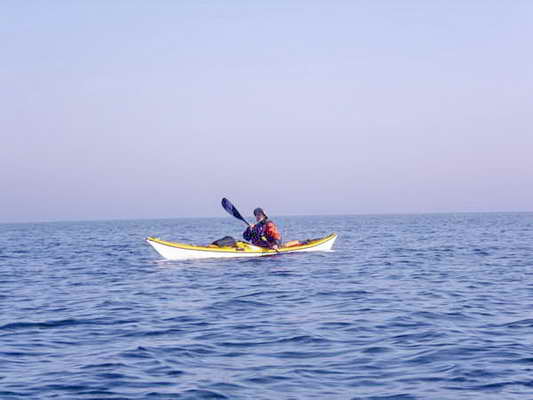 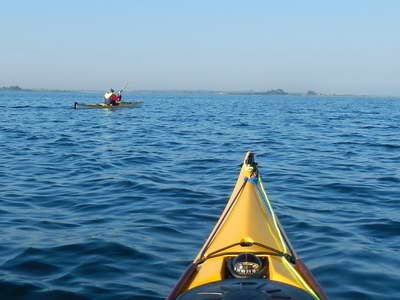 Our plan had been to get ashore as soon as possible, for Bente to rest for the rest of the day, and then maybe continue to the car late in the evening. But it turned into a brilliant sunny perfect morning and she wanted to continue and so we did – landing in front of the car at 9am – 4 ¾ hours after leaving Endelave Island. An excellent effort from Bente who does tire easily, and is not very strong. It was probably the slowest Laurie had ever paddled with anyone. 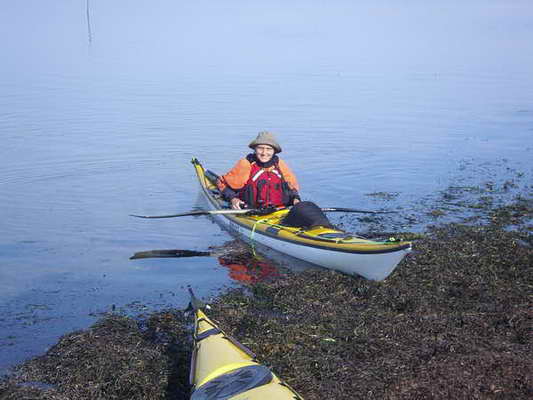 Back at the Æbelø car park.

Drove home much to Bente's mother's surprise who was looking after the dog Aja while we were away. Dorte (who normally looks after Aja – but has been away) turned up later with ice cream and she was amazed that Bente had done all that and was still up and fresh as a teenager. Bente's mother was also amazed. They loved the photos of Bente paddling in front of the sunrise. Bente finally had a lie down for a couple of hours after they had gone at 6pm.

Bente's really looking forward to getting the Sea Leopard sea kayak (Tasmanian designed in 1975) and doing more next year.

Weather Forecast: Before we left we printed out a forecast that gave hourly predictions for every day and Laurie studied it closely to plan the trip over and back, and knew it fairly well – and put a copy in his kayak. But then never found the copy again till we got home and were unpacking. But it was a fairly good forecast taken all round and we would certainly use that website again next trip.
(http://www.tutiempo.net/en/weather-bogense.html?data=hourly) 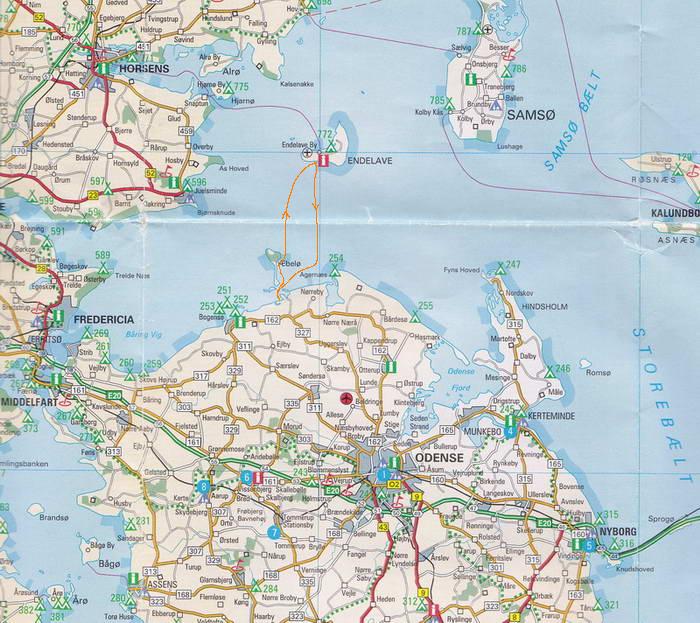