After reading some recent trip reports of people paddling across Banks Strait I feel I absolutely must point out that their GPS is deluding them. They don’t seem to understand what a GPS is telling them. 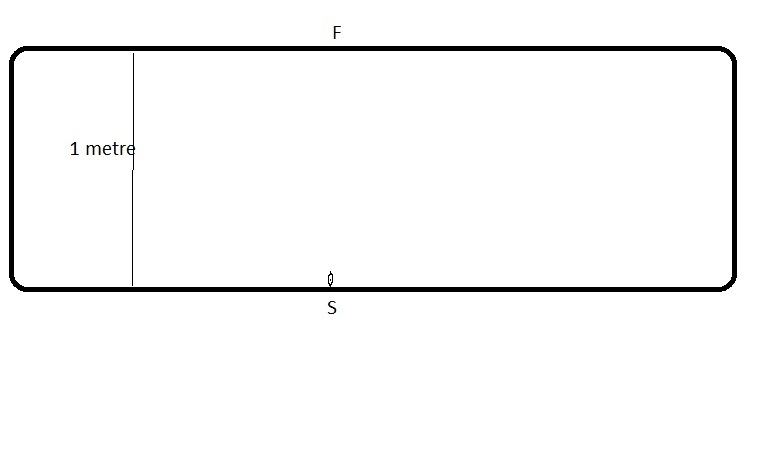 As he starts off paddling from S (start) you pick the bath tub up and carry it 30 metres to the right, and then carry it back 30 metres to the left. When that man gets ashore at F (finish) and writes his trip report he may say “I had a 61 metre day.”, because that is the distance shown on his GPS. 1 metre across the bathtub and 30 metre to the right and then 30 metre to the left. Quite obviously that is just bloody nonsense – the fact that the bath tub moved sideways and back again has no bearing on how far he paddled. He can only ever paddle one metre. When he writes his trip report he should say “I had a 1 metre day.” People reading his trip report would then assume he paddled 1 metre which is correct. I can’t believe that anyone can dispute this – the fact that the bathtub is being moved sideways has absolutely no bearing on how far he physically paddles. The GPS tells you how far you have travelled in relation to the earth's surface - not how far you have paddled.

Let us now look at a much bigger bathtub – the Banks Strait bathtub.

These are direct quotes from the trip report I was directed to:

"we set our sights on making a start and paddling 6 km to Swan Island for the night so as to set ourselves up for a small weather window to make the rest of the crossing to Clark Island in the morning.……….. At 5pm we launched and quickly made the 6 km crossing by 6pm and set up camp on the beach on the western side of the island……………………. Next day was an early start up in the dark at 4.45am and on the water by 5.45. Winds were 8 knot NE and predicted to increase to 20 knots by 11am. This was a head wind so we were keen to go as early as possible but still had to take into account the tides. They run at up to 3 knots in an east/west direction through Banks Strait. Banks Strait has an awesome reputation for rough water with wind against sea. With an ebbing tide it was certainly a lively bit of water. The predicted tide change was for 7am but as became the norm for the area the change was an hour and a half late and we were drifted over 4 km off course before the change brought us back on course for the SW tip of Clark Island."

From Swan Island to Spike Bay across Banks Strait is close to 21km – the red line (this map has a 10km grid). But Banks Strait is like a huge bath tub (outlined in blue), that whole body of water moves sideways and back again exactly like the bath tub that was carried sideways above. Say you start paddling 2 hours before LW. The next two hours all that water will move to the right say 4km, then at LW it will change and all that water will move back to the left 4km. This is exactly the same as the bath tub being picked up and carried sideways and back again. When you get ashore at Spike Bay your GPS is now going to show that you have travelled say 28km – but for the same reason the man in the bath tub cannot count the 30 metres he was carried sideways in each direction, you cannot count the 4km you have been carried in each direction in Banks Strait. To quote the trip report again:

When the trip report is written it should say that they had a 20km day – the GPS reading minus the 4+4 km of sideways movement, ie. 20km. If you write a trip report and say you had a 28km day then really you don’t have any idea of what the GPS is telling you in this situation.

If you put that first bath tub on the back of a lorry and drive 600km up the Hume Highway while the man paddles across the bath tub it seems that people are suggesting it is quite OK for that man to write a trip report and say “I had a 600km and 1 metre day today” because that will be the reading on his GPS. He is leading readers to think he paddled 600km and 1 metre. Now come on, be serious. You are being deluded by your GPS.

This is just simple mathematics and if you can’t understand it then print out this article and take it to your local Primary School and get the Mathematics teacher to explain it to you.