This was just planned as an easy overnight camp trip to Maria Island in preparation for Flinders Island trip in February. I always do this – I rarely take anyone to Flinders who I haven’t done an overnight trip to Maria Island with. And this was the first time that all the paddlers met for the first time, and was a good chance for some of the newer paddlers to see what other people were using in the way of gear and food.

And the same as in 2015 I planned to carry the loaded kayaks all the way to the beach from the cars – maybe a couple of hundred metres (it seemed like more). Everyone had made an effort to make their kayaks be carried by 4 people using the decklines with plastic hose on them – Tasmanians have been doing this for 40 years. We stopped halfway to the beach and everyone swapped sides to give their arms a rest, but it was a relatively easy process and much further that we would be carrying them on the Flinders Island paddle.

A very light SE wind let us sail but it was so light some didn’t bother till we were almost at the campsite. 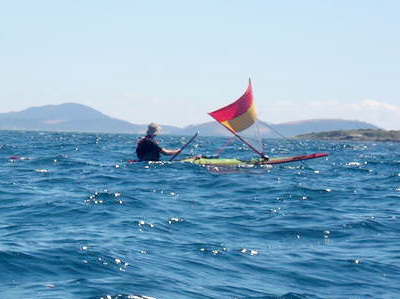 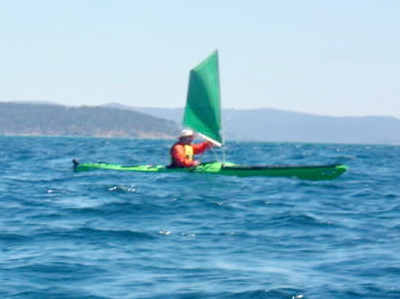 After setting up camp the two youngsters (Matt and Sue) went off for a paddle right around the bay for a couple of hours. Arthur’s back was quite sore and he very nearly didn’t come on the trip – and he had a bit of a rest while Richard and John and I went up towards the convict cells and brought a lot of firewood back. A couple of young girls from Belgium had put up their tent very close to us, and asked where the nearest beach was – for swimming. The only possibility was along the other side of the old stone jetty and John showed one of them where it was, and she went for a swim. John and Richard both went in for a swim in a slightly different area. I have to say she was very easy on the eye in her bikini and didn’t object when I asked if I could take a photo of her. Both girls came over and sat round our campfire in the evening. 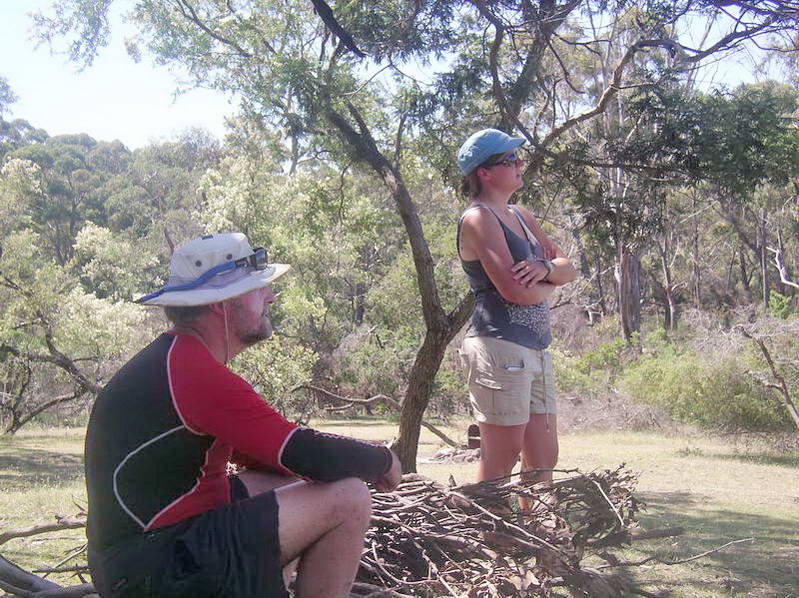 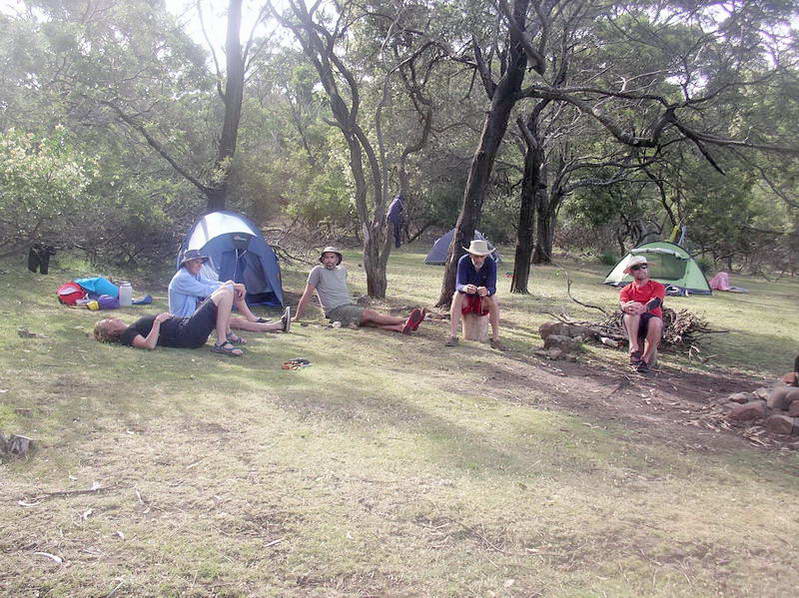 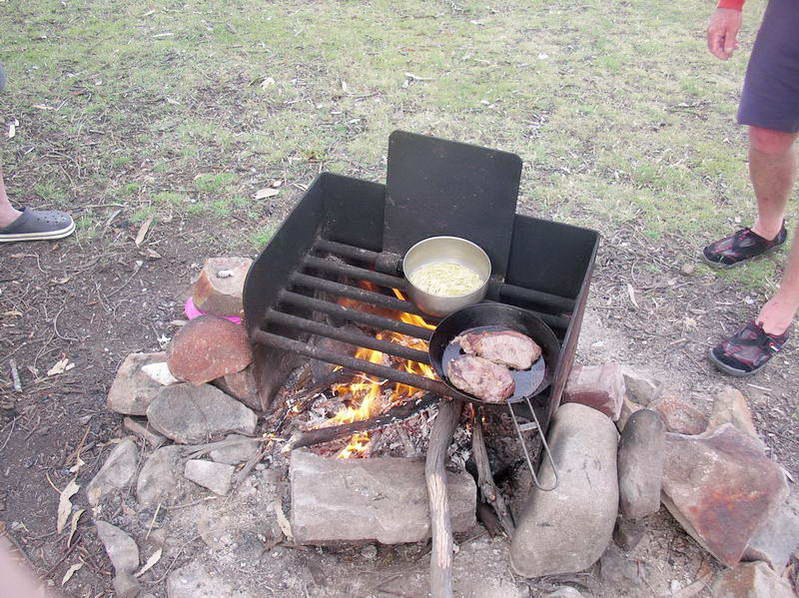 The usual steak for Richard and John 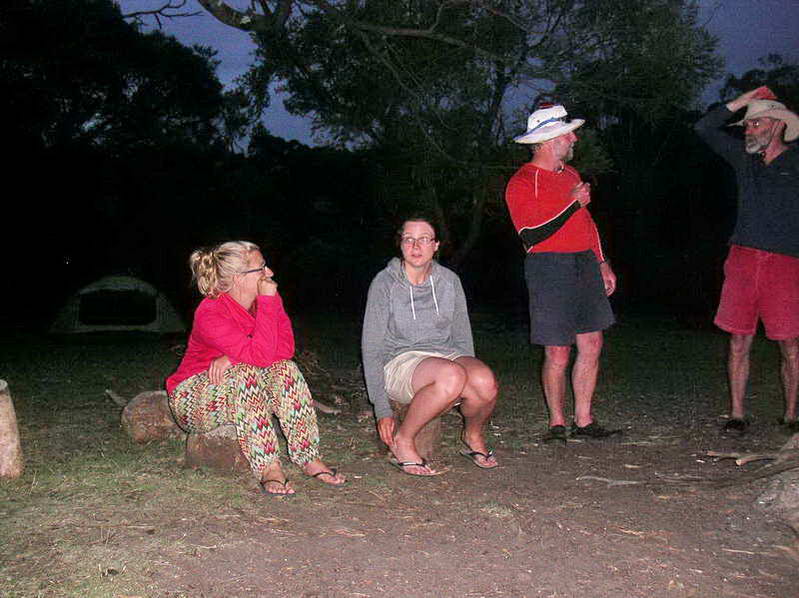 Well before this trip I’d asked everyone to have a strap sewn on the top of their hat to clip a red flashing bicycle light onto for night paddling, and planned a night paddle for here. As it got dark I demonstrated how effective retro-reflective tape is, and the way it only reflects back to the light source. This is quite noticeable even if you hold the torch out at arm’s length, and then up near you shoulder and eye – there is a big difference in the reflection back. Most of the kayaks had some of this tape on them. Then I went off paddling and they used their torches to see how effective the tape was from a distance. Then I put my red flasher on and Matt and Richard and John came out to join me for a short paddle – the red flashers being very effective from a long way away. I always carry a submersible torch (very bright spot light) on the deck of my kayak during these trips – it is there 24 hours a day. Just as we started paddling in the dark a vessel came round the point into the bay and was heading straight for us – I shone my light in his direction to let him know we were there, but in actual fact he had 3 huge headlights on his boat and would have seen us anyway. He altered course and went way round the front of us. We paddled out round one of the anchored yachts in the bay and then back towards the campsite. As we did the boat with the lights had turned and was heading back towards us – we ignored it and it went round behind us this time. I used the torch again to locate the landing place near the campsite. We could easily go for the next 10 years and never do a night paddle but I consider it important to be aware of how easy it is, and how effective these flashers and submersible torch are. 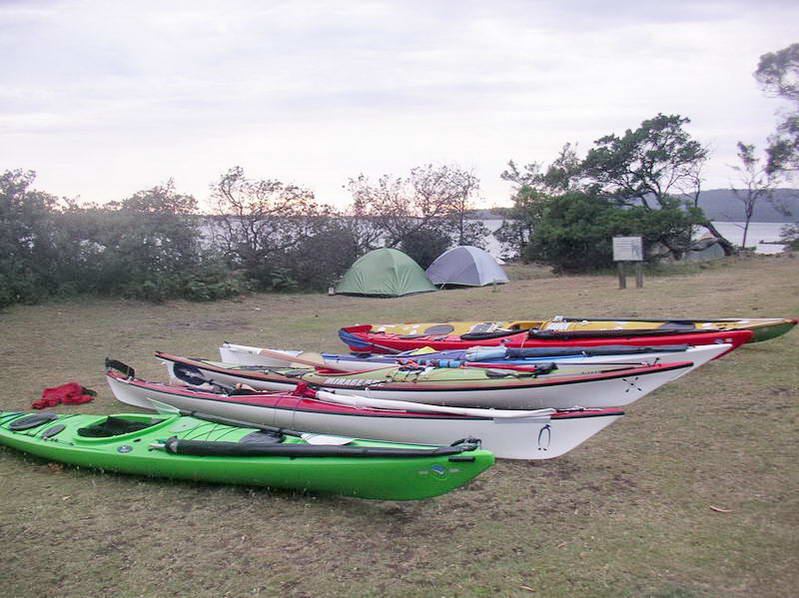 The next morning there was a spectacular sunrise which I saw from my tent fly, and Sue did as well as she had put up her tent with it facing east.

There was a very brief shower just as the 2 Belgium girls were packing up to walk north for the 2pm ferry but an hour or so later is was a nice warm sunny day.

Arthur wandered over to have a look at the convict cells, and Matt and Sue went over there later as well. I had planned a 2pm start to paddle back to the cars but everyone was ready before 12 so we went early. It was just barely possible to sail most of the way back in a very very light NE wind which died out altogether the last couple of kilometres. 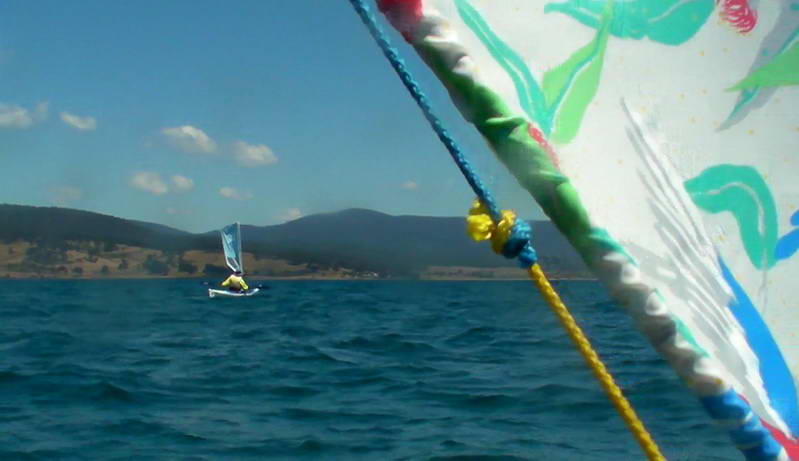 We all went for a swim after landing at Earlham Estate beach before carrying the kayaks up one at a time.

John and Richard’s kayaks were the only ones not being carried by the deck lines – but we had 4 handles which we could attach to the handle on the front and back of their kayaks. We had used these on a Maria trip a couple of years ago, and for the whole of the 2015 Flinders Island trip and they made carrying them very easy. BUT, just as we were putting Richard’s kayak down next to his car the whole thing ripped off his rear deck. The handle the Sea Birds comes with is held on by two quite small metal threads (about 5/32 inch) and they had finally broken and the whole handle came off, with our two handles attached to it. I think we’d all had private thoughts that these were very small bolts to be carrying such a weight – but the kayak is labelled “Expedition” so you would have thought they would have provided decent handle for carrying a fully loaded expedition kayak. Not so. Now we will have to replace the 5/32 bolts with something bigger before John does the Flinders trip in a few weeks. See Carrying Kayaks.

We let Arthur off doing any carrying because of his back and while we were carrying the kayaks up he was inspecting the inside of a house for sale right next to the locked gate which stops us getting our cars nearer the water. He and his wife Minnie have been looking for a house near a beach for some time now, down the channel way, and also on Bruny Island. He had never heard of Earlham Estate before – it is a bit out of the way for most people driving around.

Right about now a screaming SW wind came out of nowhere and it was lucky we were ashore – we wouldn’t have left Maria Island in these conditions. So along to the pub at Orford for a quick drink before heading home – very enjoyable weekend.

During the trip Sue announced that she is officially engaged, with a view to become Mrs Johnson some time in the future - but is planning to still be known by her current name.

Update on the handle coming off the Sea Bird. It appears the last couple of threads stripped as the bolts were not long enough to go all the way to the bottom of the thread. New longer bolts were the answer.