(This is a quick draft report - I may get some better photos and comments from the other paddlers later))
Maria Island - May 10/11 - 2014
(map)
After our very pleasant 9 day trip to Flinders Island in February the Girl decided she wanted to do it again next year, but for longer. So we decided to do an easy weekend paddle every 2 months during the year just to keep our hand in so to speak. This was the first one. We weren't planning anything hard, just something to make us put our kayaks in the water.

Since March I had been paddling every Tuesday morning with my two hockey mates, Richard and John, to get them up to the point of being able to do these trips as well. Although they are easy trips, you do need some skills. I'd also run into Toby Clark who hadn't paddled his sea kayak for about 17 years – even though he was one of the group that paddled across to Victoria and back in 1987. It was Toby's birthday on the 11th (as well as Mother's Day) and he abandoned his plan of putting on a barrel for his family and friends in favour of coming to Maria Island with us. I even helped him get his kayak down from where it was hanging in his shed – covered in 17 years of cobwebs and dust. He brought along a friend Peter Lee.

We couldn't plan to start paddling from Earlham Estate before about noon as Richard was playing hockey at 8.30 Saturday morning. However I went down there much earlier because I knew that other paddlers from the Maatsuyker Club were starting a trip there as well. There were 7 of them almost ready to go when I got there – but they didn't seem to have much idea of where they were actually going to go or where they were going to camp that night. 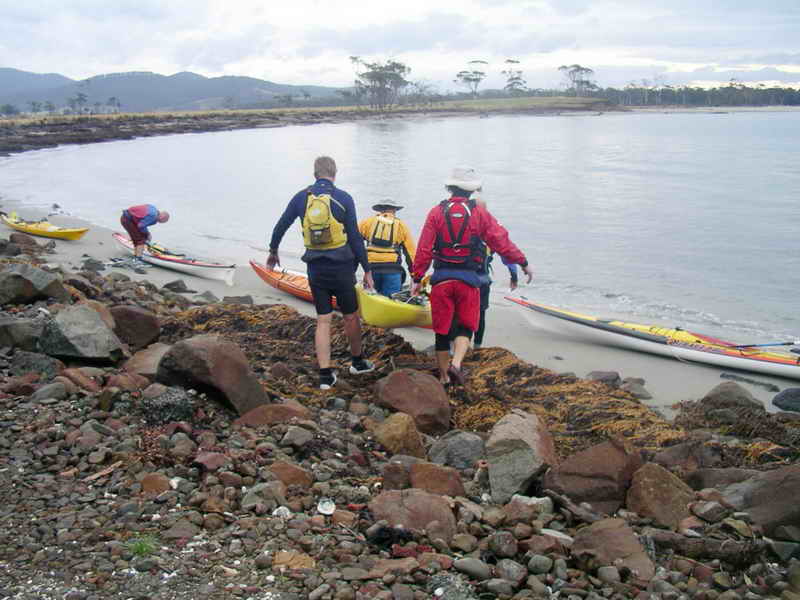 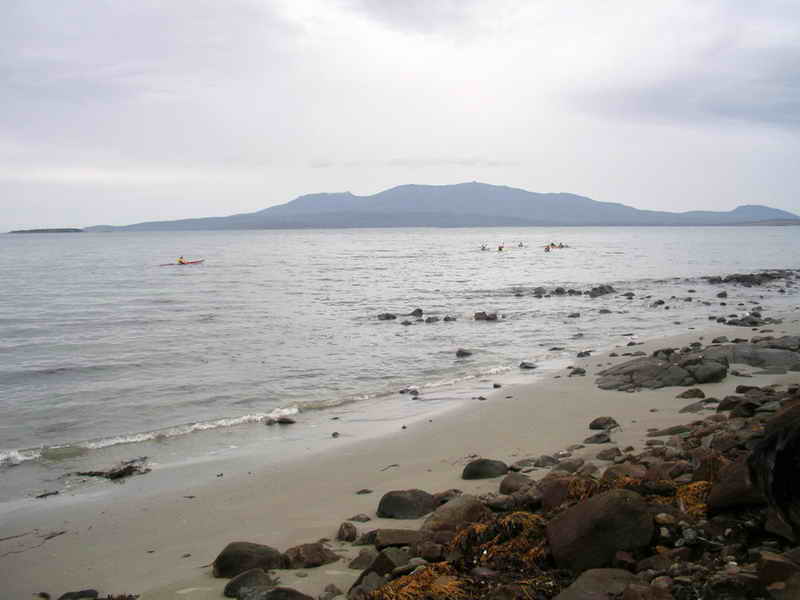 And heading off south.

Later on Sue arrived, then Toby and Peter ( I had brought my spare Greenlander for him), and then Richard and John before noon. We started paddling about 12.20 under a very light NW wind and fairly smooth conditions – waves no more than 60cm. 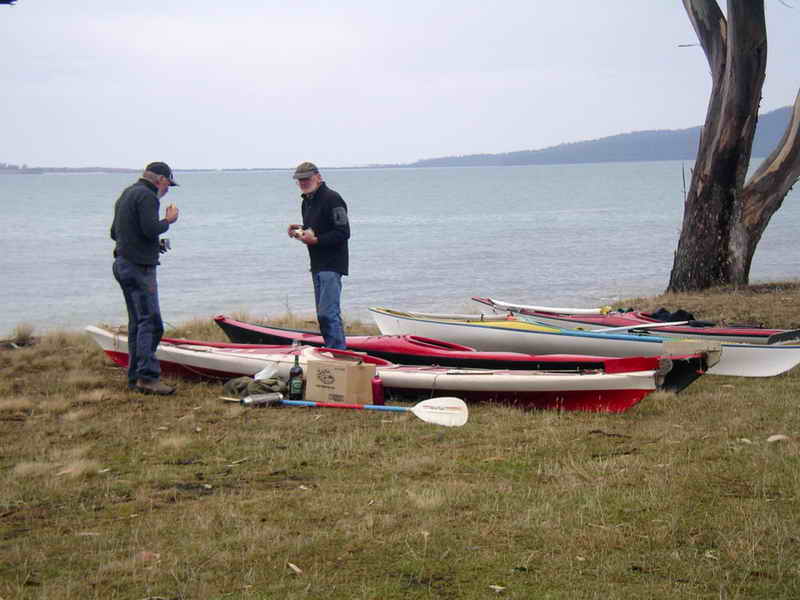 Toby and Peter having a quick lunch. 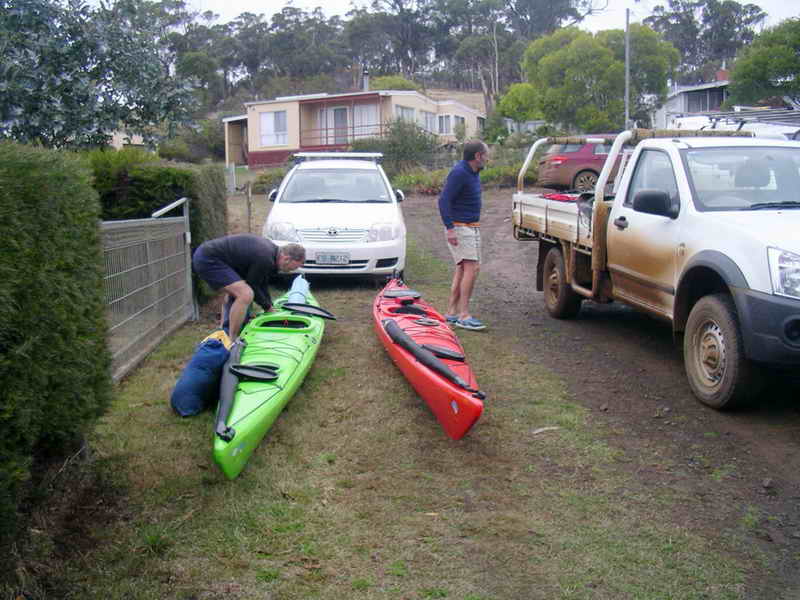 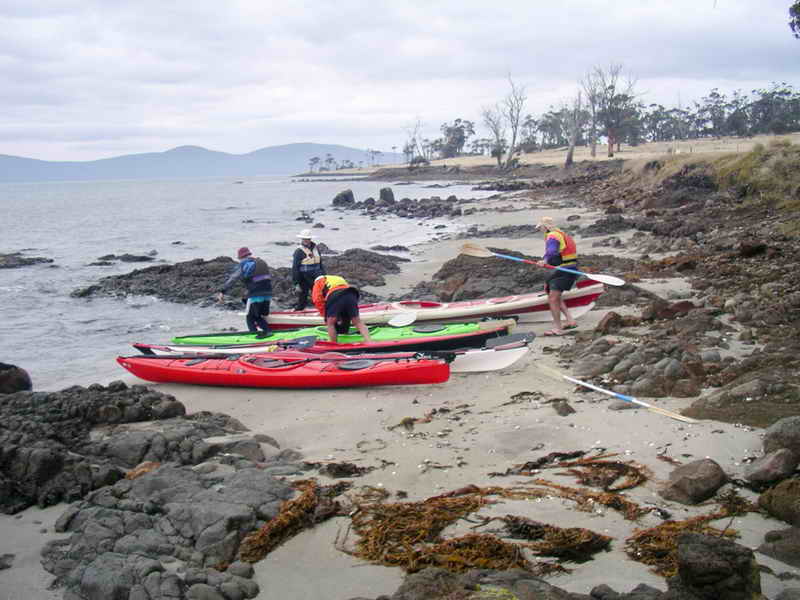 About halfway across Mercury Passage most of us put a sail up, except Toby who hadn't quite got round to fitting a new cord to his sail, and Peter decided he was quite happy just paddling. This was his first ever sea trip. It took ¾ of an hour to get across to Point Lesueur, and another half hour to Encampment Cove in Chinamans Bay – where we were surprised to find one of the other paddlers there. Grant Hyland had pulled out of the Maatsuyker trip who were going round the southern end of the island, and arrived here just before we did – having paddled near some Dolphins coming into the bay. Toby and I had paddled with Grant about 17 years ago. 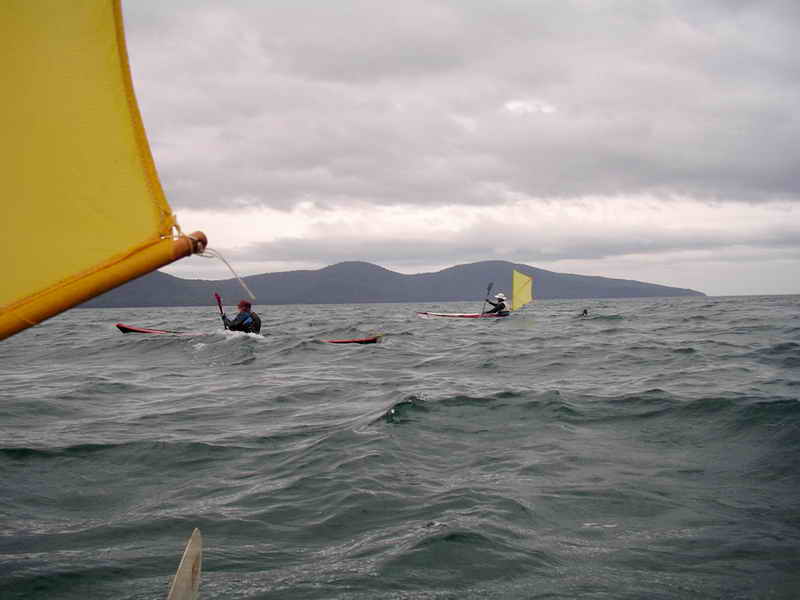 Peter and Sue, with her sail up. 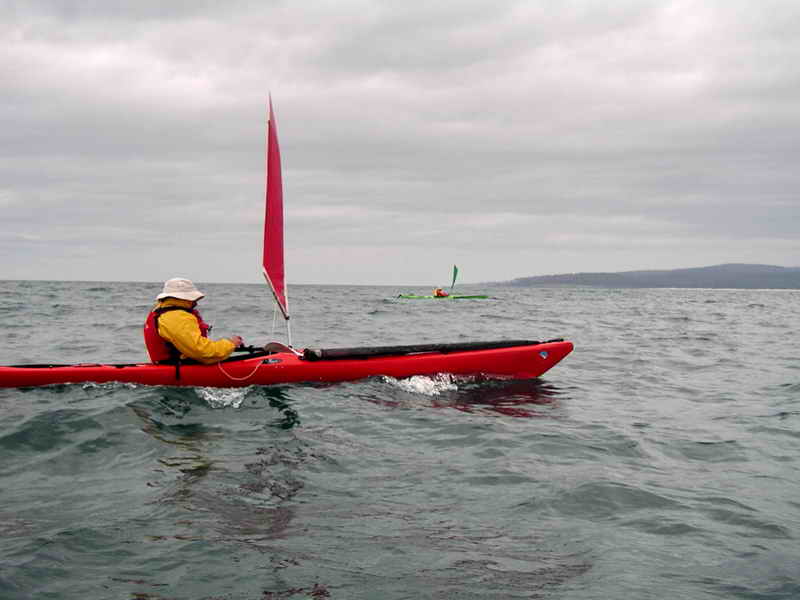 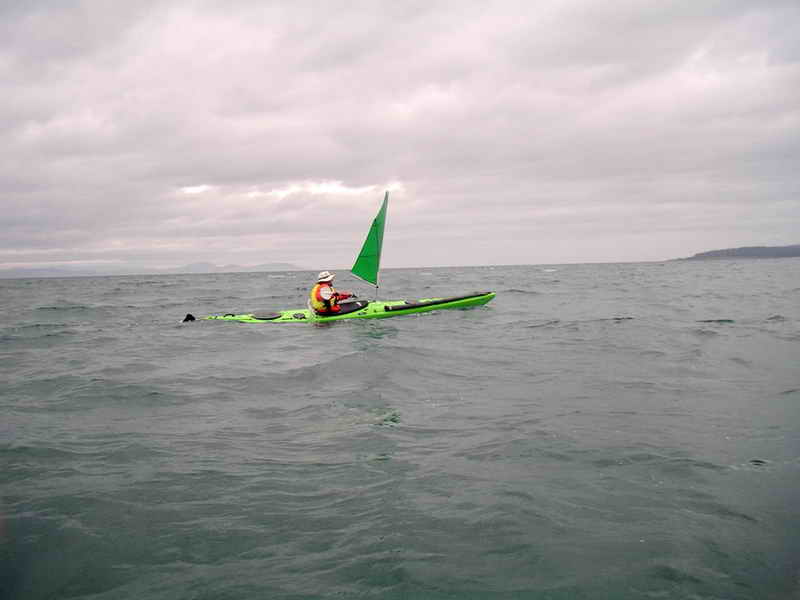 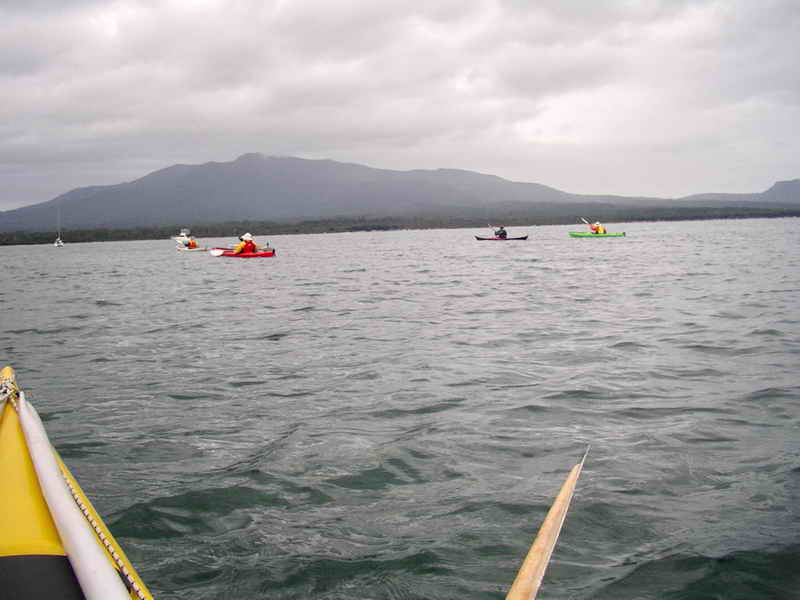 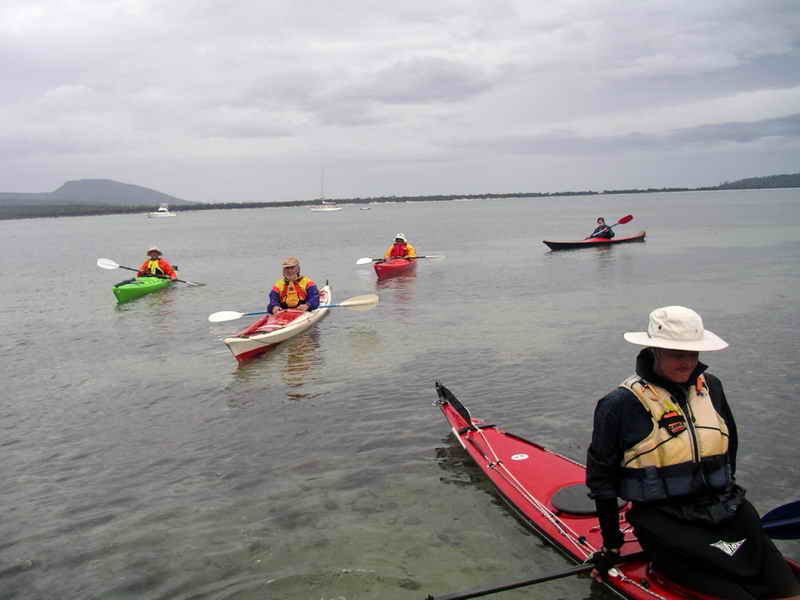 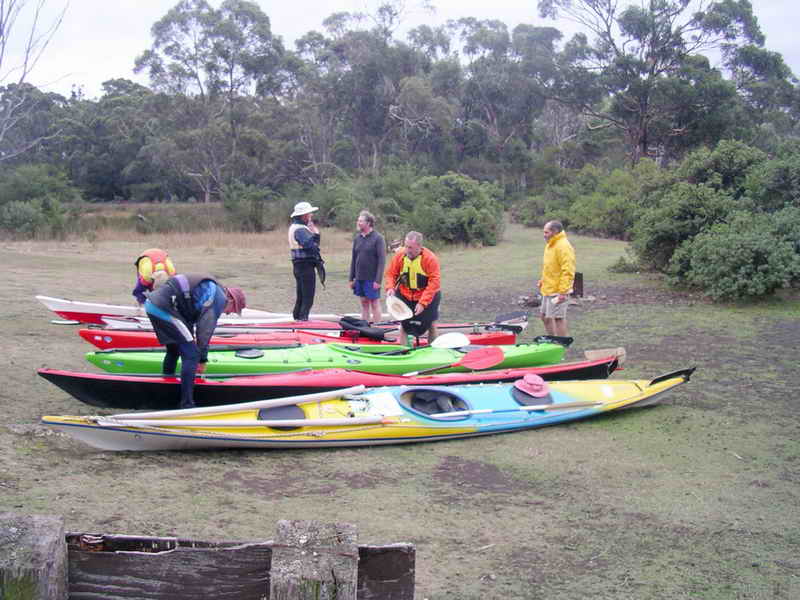 The day was very overcast but not cold, and just after we put our tents up it started to rain lightly, and continued for at least 2 hours. We'd got a big fire going and most of us stayed in our paddling gear till we went to bed. Right on nightfall the slight wind died away and the rain stopped and the sky cleared and it was a fine starry night. Richard and I had collected a lot of dry gum branches from up the track a bit, and Sue had found some big sawn logs, which Toby split with his axe - he is the only bushwalker/kayaker I know who carries an axe. 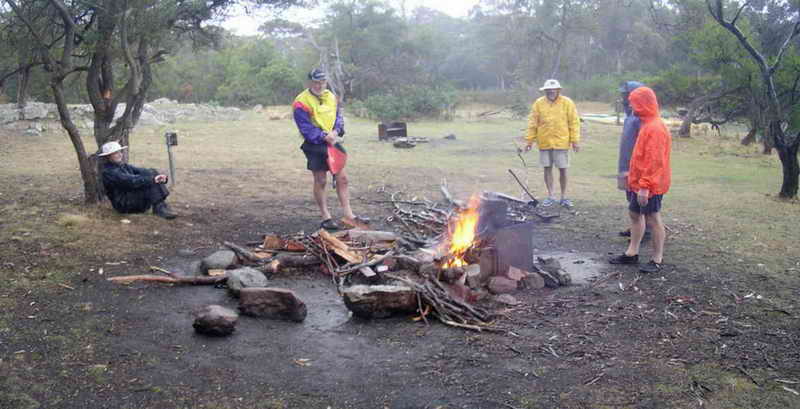 A light rain for about 2 hours. 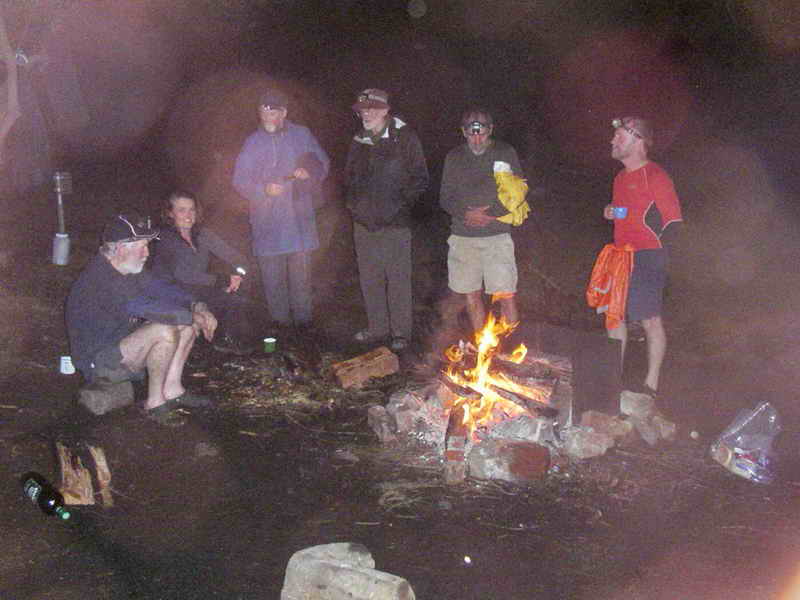 After the rain stopped.

John and Richard cooked their large T-bone steaks over the fire, and Toby produced a large bottle of Stones Green Ginger Wine to celebrate tomorrow's birthday. We presented him with a signed birthday card and a bottle of Port, the one that is specially bottled for the Dunalley Pub. It was a very pleasant night. Only one thing ruined the evening. John gave me a small bottle of Coke, said it was a present from one of the hockey players we have lunch with on Fridays. It smelled a bit funny when I opened it - he had put Rum in it. Ruined a perfectly good bottle of Coke.

Tomorrow's forecast was for wind and Sue wished to get back early as she had a bit to do before leaving the state on Tuesday – so we planned for an early start hoping to beat the start of the wind. 9 to 9.30 or earlier if we were ready.

Sunday it was a fine morning and I built the fire up – it was still going owing to Grant being up earlier and throwing a bit more wood on. Richard cooked his porridge over it. 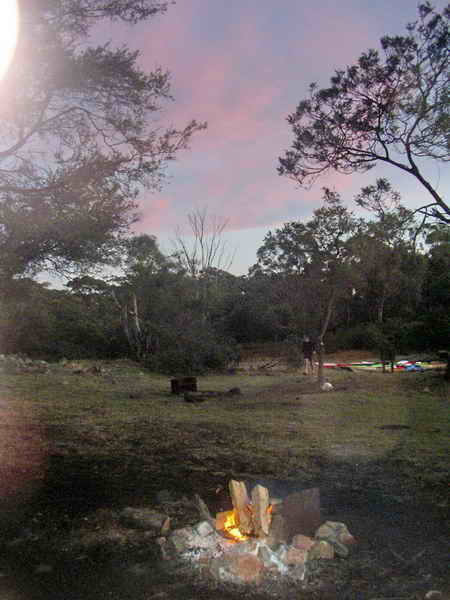 I was surprised that everyone packed up so quickly – people new to packing gear in a kayak quite often take hours to repack it. I sent Sue and Grant and Richard and John off as soon as they were ready because even half an hour can make a huge difference in the weather – it was still pretty calm and there was not a lot of breeze blowing the tops of the large gum trees round the campsite. They were instructed to paddle out to Point Lesueur and if the conditions were still good to keep going, if not then wait for the rest of us.

There was a Strong Wind Warning Forecast this morning for this area. 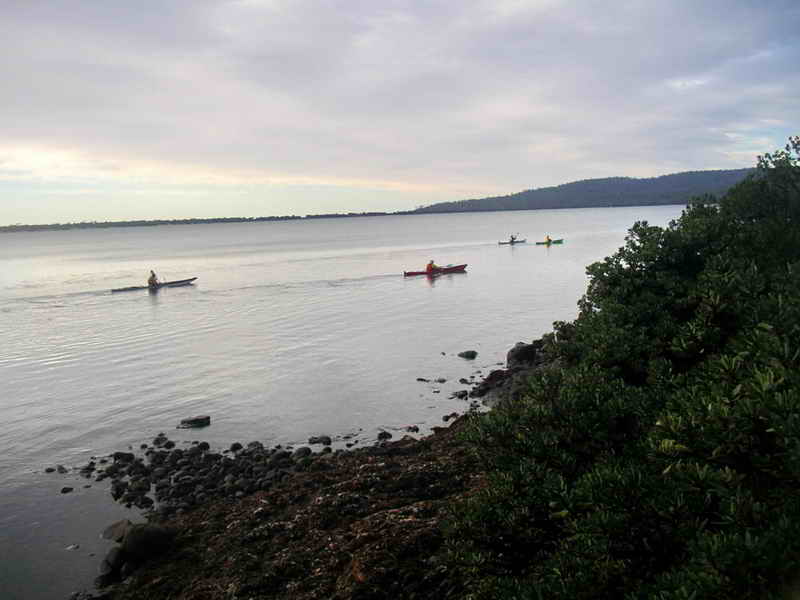 The first 4 on their way.

Toby and Peter and I left not long after, not planning to attempt to catch up with the first group. About half way across Mercury Passage the wind did start to increase slightly and very small white capped waves started to appear. I put a sail up and could see way ahead of me that John and Grant had also put theirs up, and the 7 of us all arrived back at the small beach where we had started from within a few minutes of each other. We carried all the kayaks up on top of the small bank, and then one at a time carried them to the parked cars. 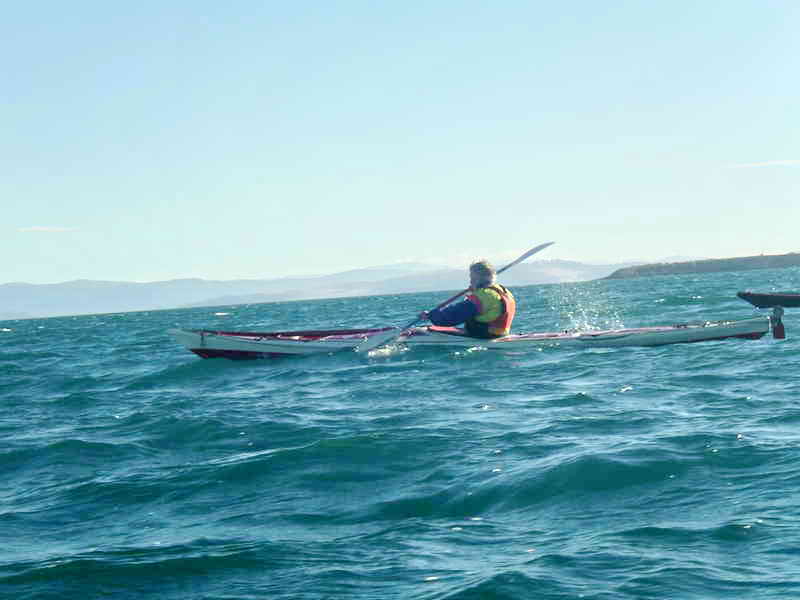 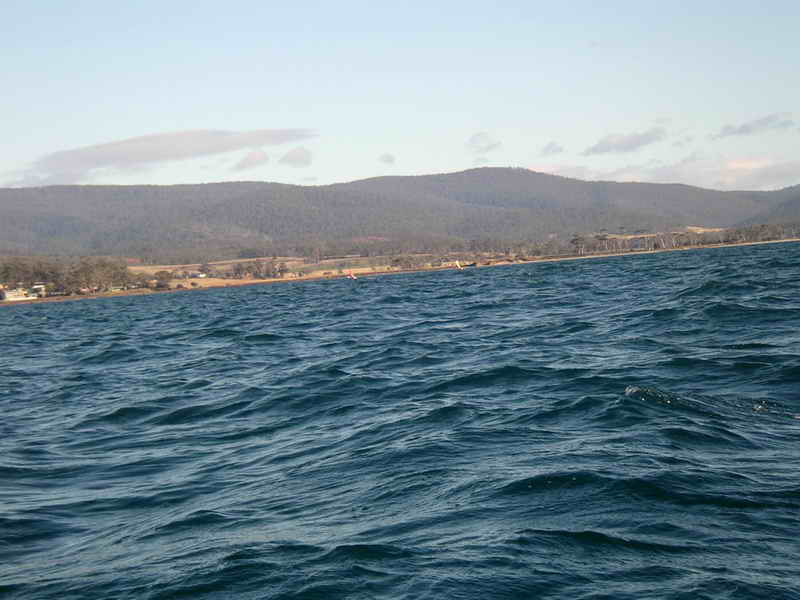 Richard's and Grant's sail way ahead, nearly back to the cars. 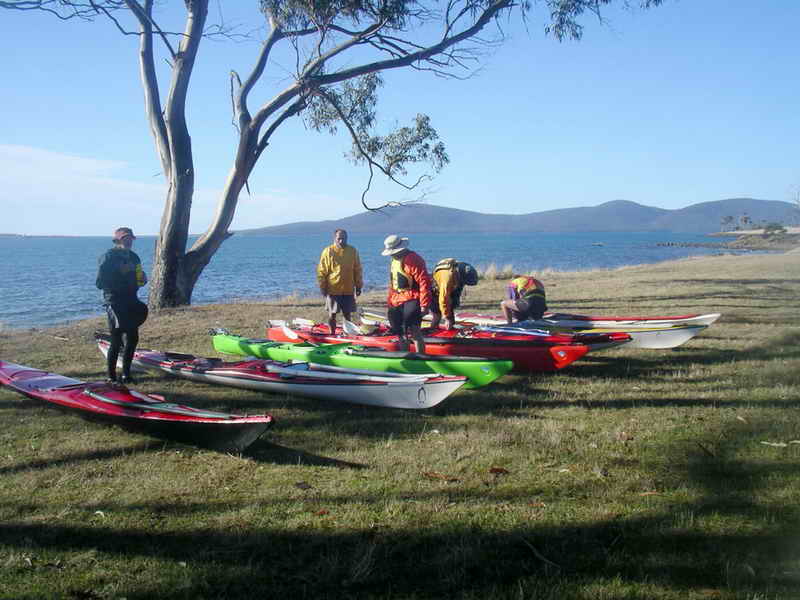 Back on dry land.

Despite the rain, and despite not having enough time on the island to walk around and see a bit of it, it had been a very pleasant trip meeting new faces and renewing old acquaintances. Sue headed for home while the rest of us drove to the Orford Pub for a couple of beers before then going to the local picnic ground and cooking lunch with some of the food that was not required since our trip was not as long as it could have been. The wind was whistling through the tree tops while we were here, and I was glad we were not crossing Mercury Passage right now. 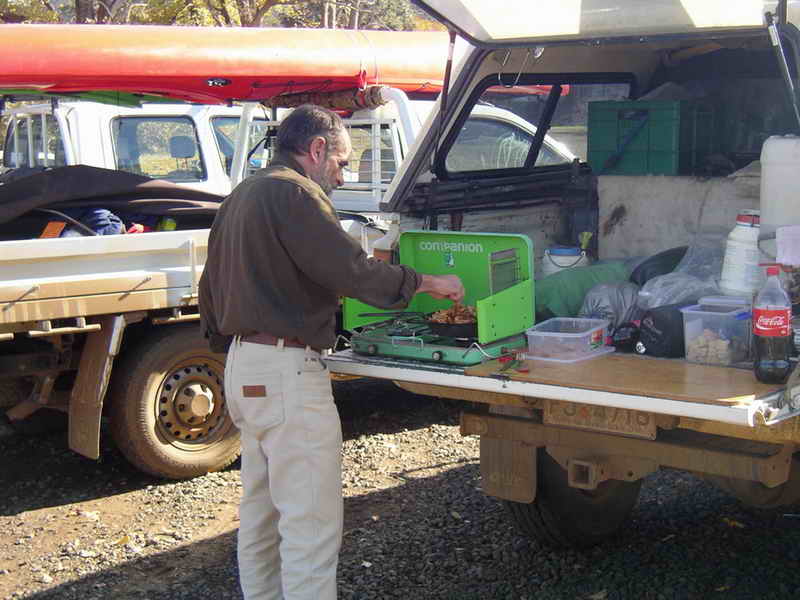 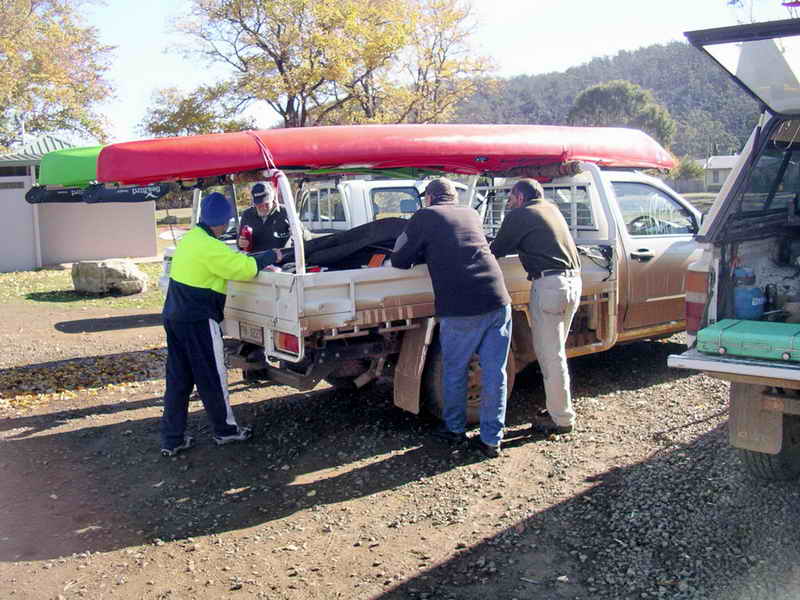 The Seniors. (Now is that a possible name for a new kayak club????)

Hopefully we may join up again for the next trip down to Fortescue Bay on July 5/6, keeping Bernard Shaw's quote in mind:

Man does not cease to play because he grows old.
Man grows old because he ceases to play. 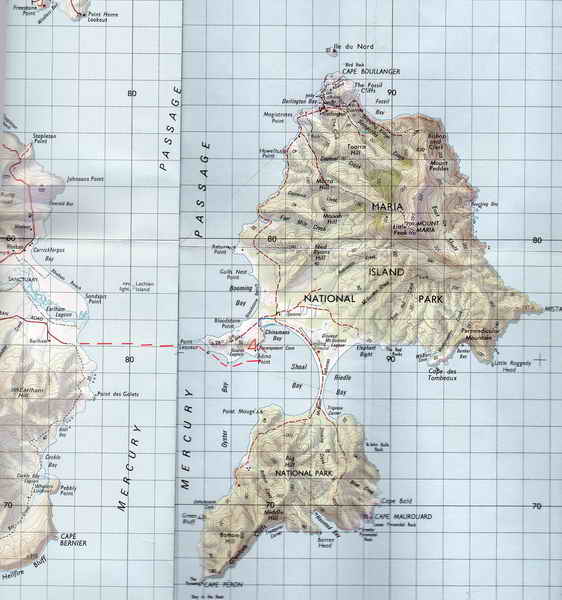