Scribe: Elli Tappan.
Start: Rockland, Maine. You can launch and park as long as you like for free at the boatramp at the end of Mechanic Street off Rte 73. 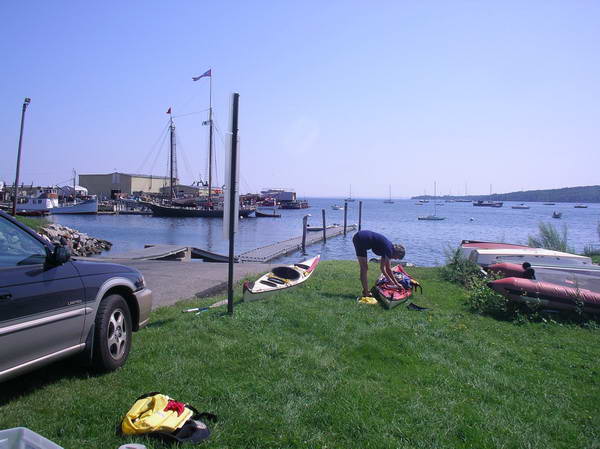 Route: You paddle for two miles along the rocky shoreline out to Owl’s Head light, watching windjammers and small ferries coming and going in the harbor. From the green buoy at the Head steer 112 degrees to a red/white buoy (bell) four miles across Penobscot Bay. Change to 146 for about one and a third miles to a green buoy (bell), and then 122 for one mile to the red and green buoys at The Narrows where the ferry and the lobsterboats are going through into Hurricane Sound. From there we paddled another one and a half miles to our friends’ little cottage on Dyer Island. A three hour trip. You must be sure to time the tide right in order to land. Many of the coves are pure mud at low tide!

We preplanned this route in case of fog, because it had us aiming towards a buoy with a bell on it all the time. Then lining up the last two buoys aimed us directly at Dyer Island. (chart) 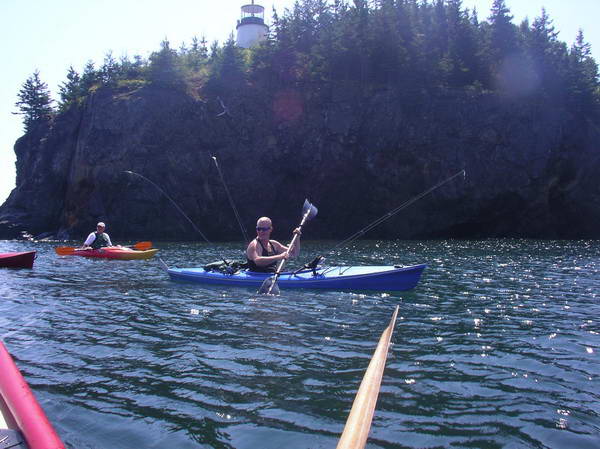 Why limit yourself to just one fishing rod?

The Island: Laurie and I had three nights visiting and enjoying the rural and peaceful character of this large island. 1200 people are year round residents and lobstering is the main occupation, replacing the old-time industry of granite cutting.  It’s not overrun with tourists, even though the ferry does make five round trips a day. There is a good Historical Society Museum and a charming small town area right at the wharf.  There are a couple of B&Bs and small restaurants. Camping? MITA has a few islands in the area. Our friends drove us to trails so that we could get to the highest point (Fox Rocks), and see The Basin. One night we took a fisherman’s boat/ temporary ferry across the Fox Islands Thorofare to go to a piano concert in North Haven, returning with moonlight sparkling on the water.

Return: On a crystal clear day we paddled out through the lovely White Islands. Like the rest of the area these are small rocky islands covered with sharply pointed pines. Brilliantly colored lobster buoys by the thousands are everywhere. We learned that there are lobster nurseries and that over 70,000 young lobsters were released along the Maine coast in 2007. From the Whites we drew a bead on the Owl’s Head light, crossing the well defined boisterous water of the deep channel and incoming tide as it swept up along the Vinalhaven shoreline. Then it was just flat calm water, a warm day, and  good views of the Camden Hills, windjammers, yachts, and lobster boats. We stopped at the Owl’s Head Park beach and then moseyed along the shoreline, looking at how many of the rectangular metal lobster traps have washed up to litter the small coves.

Landed back at Rockland, packed up, and drove to Falmouth, Maine, for the monthly meeting of the Southern Maine Sea Kayaking Network. Then on home to Wolfeboro, NH. 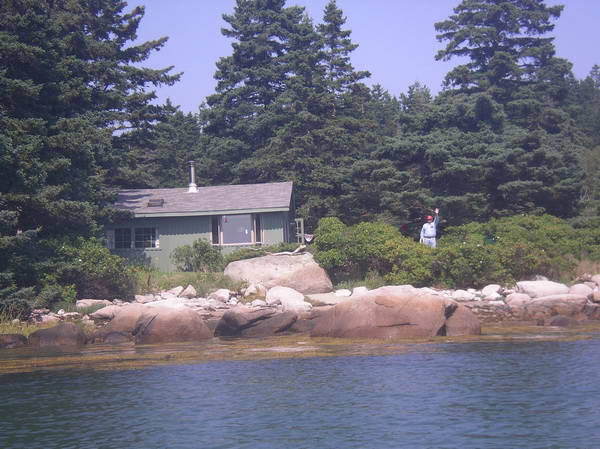 Arriving at our friends' place on Dyer Island (connected by a bridge to Vinalhaven). 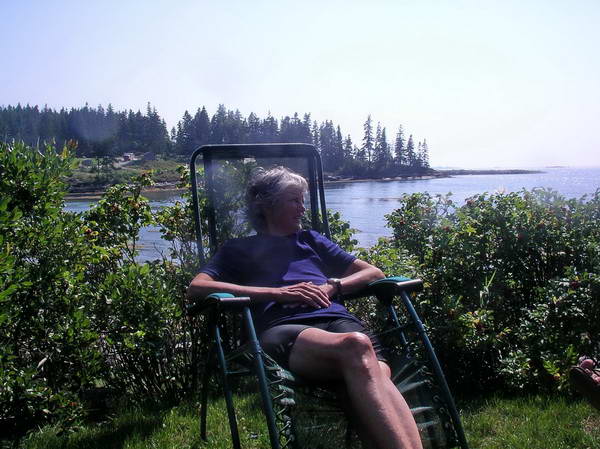 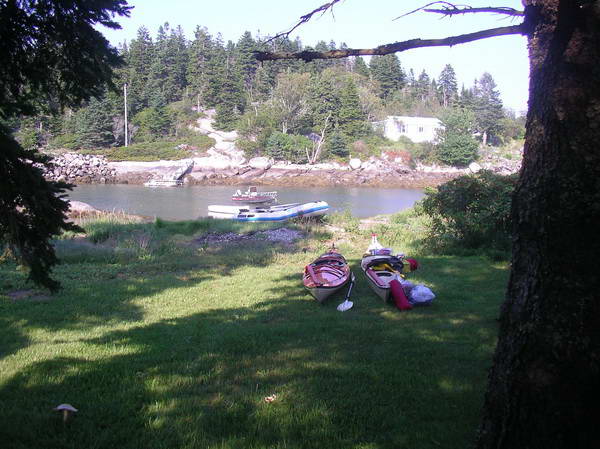 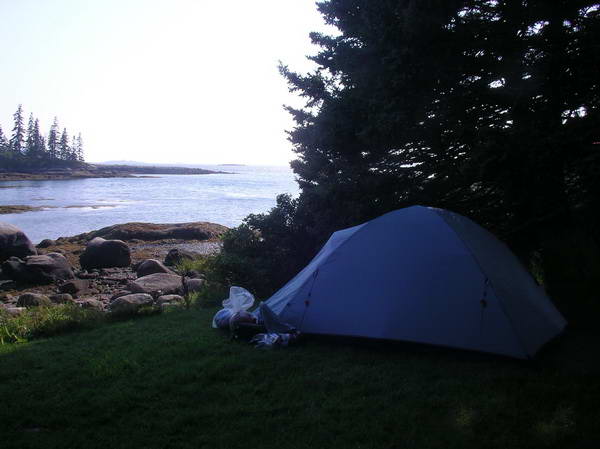 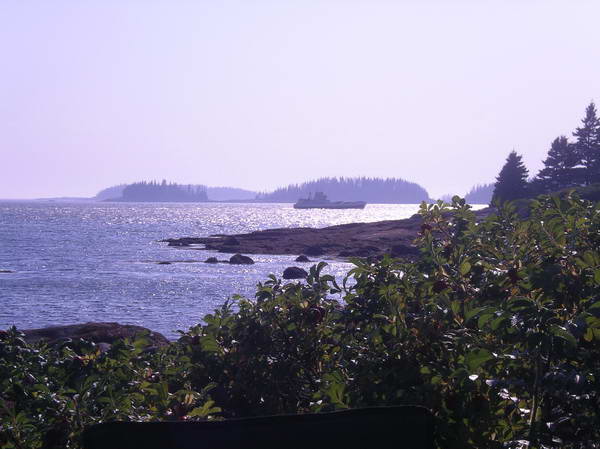 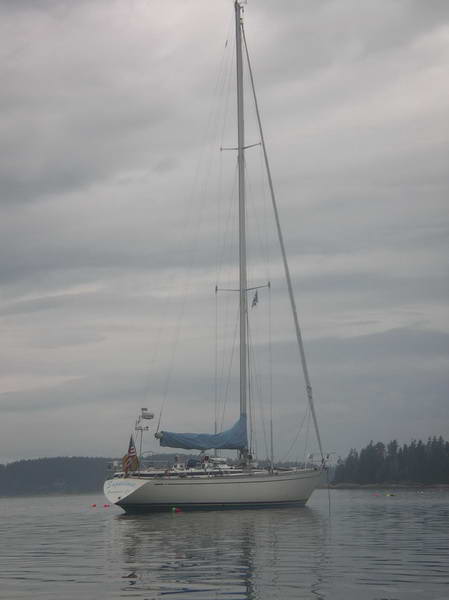 Plenty of yachts anchored around the islands. 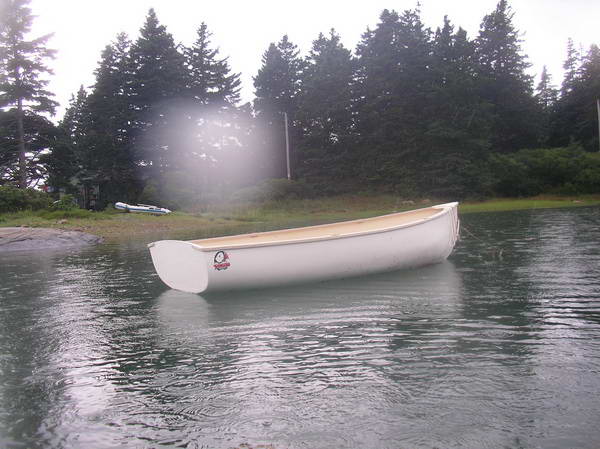 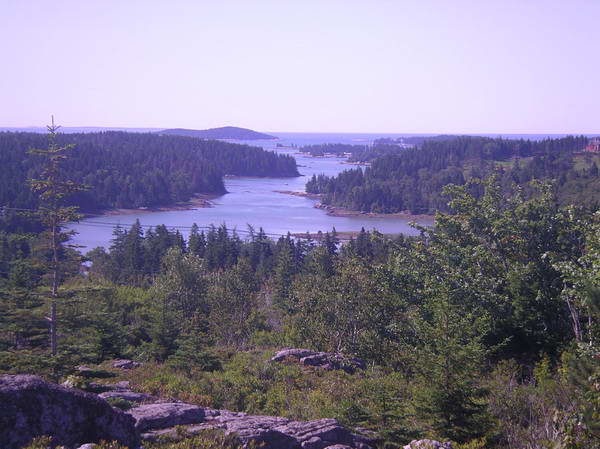 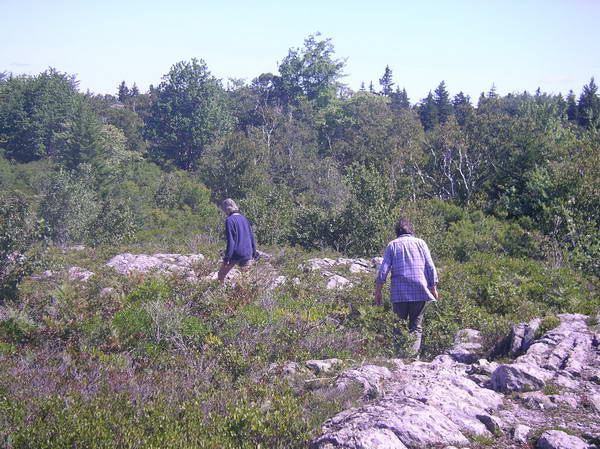 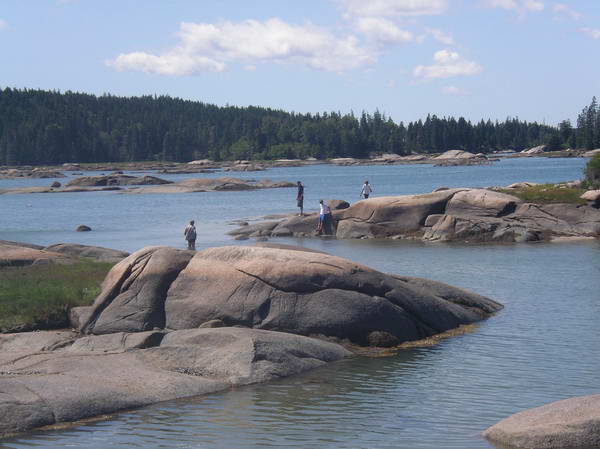 The Basin - between Barton Island and Vinalhaven. Tide pours in and out very fast, causing rapids at both entrances. (chart) 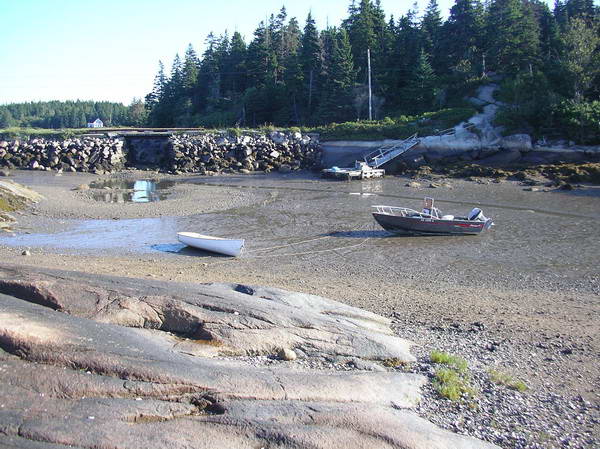 Waiting for the tide to rise to leave. 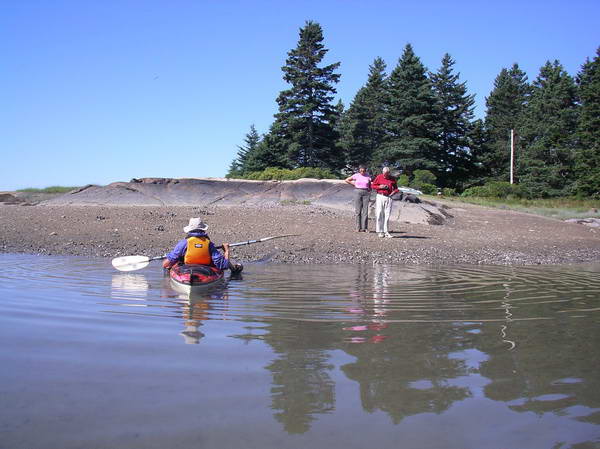 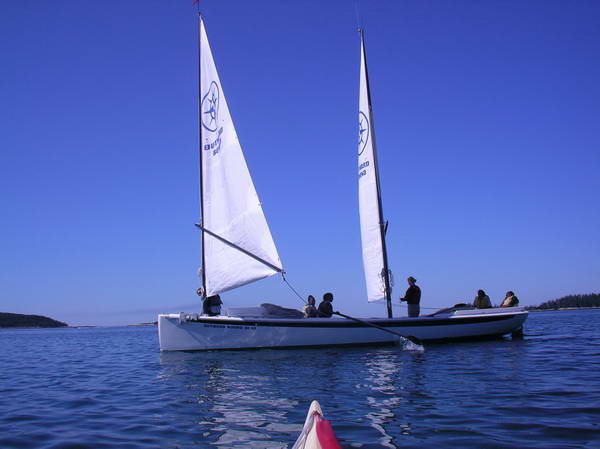 Outward Bound - they have an island close by. 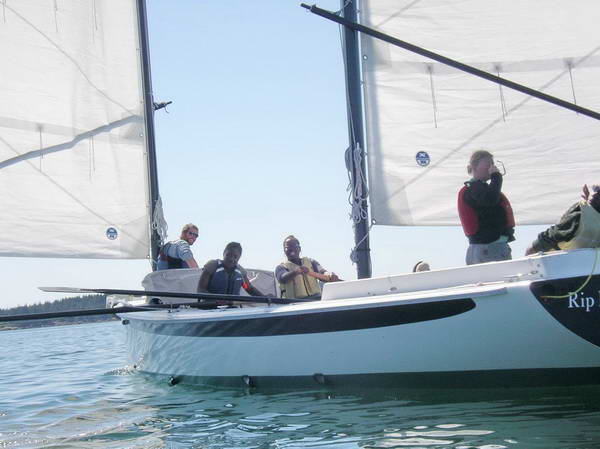 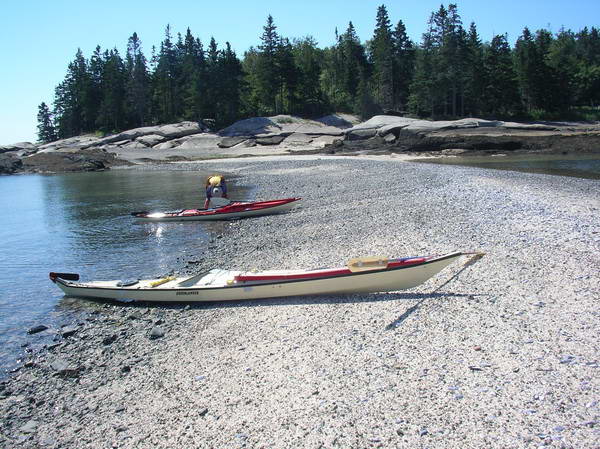 A nice little sand bar in the White Islands. 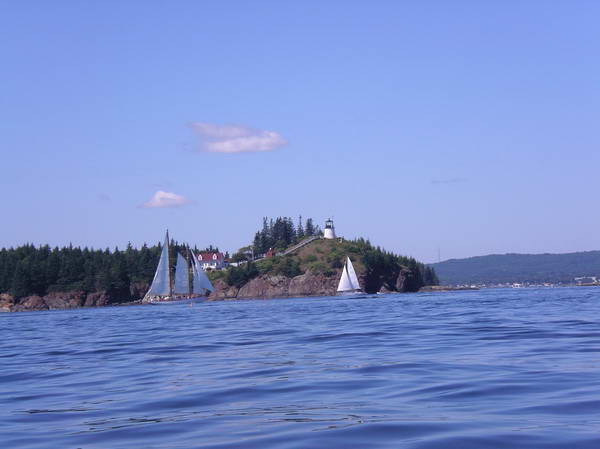 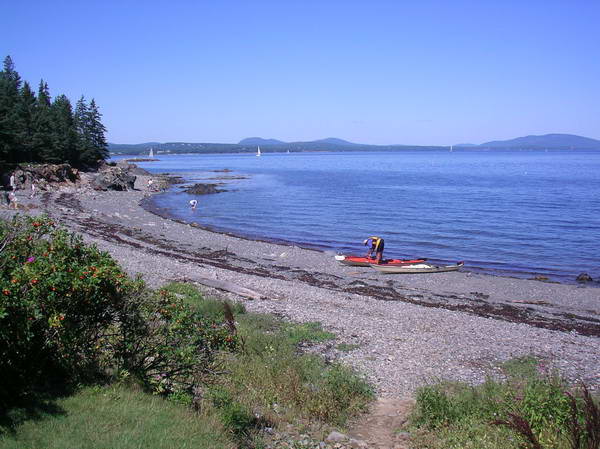 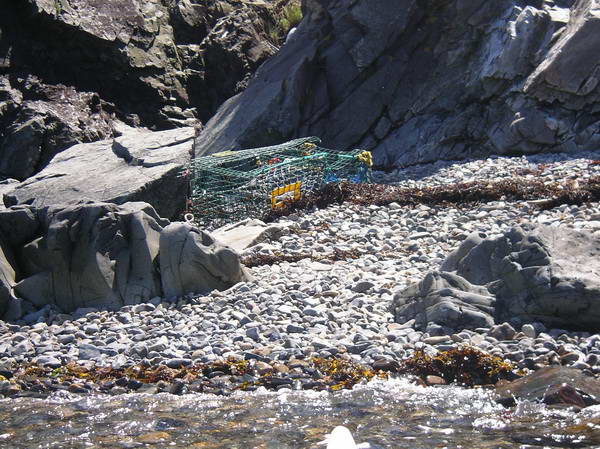 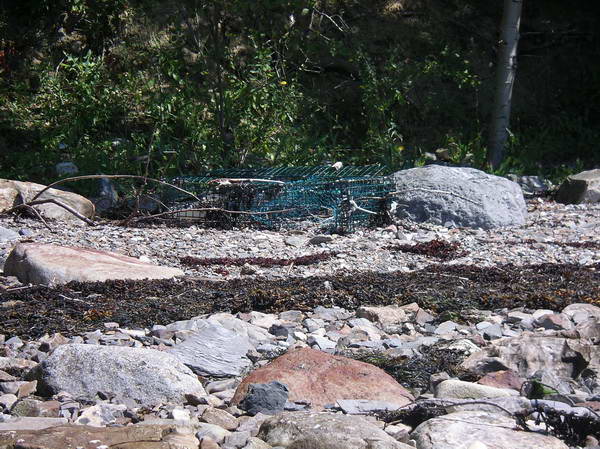