Visiting paddler from the states

During March 2006 we were visited by a paddler from the United States. We had paddled with Dave on one trip in Maine with the Southern Maine Sea Kayak Network paddlers out to Seguin Island. He emailed us to say he was coming to Australia for a few weeks and wouldn't mind some paddling. While he was in Australia he visited Cairns, rode a bicycle along the Great Ocean Road in Victoria, walked the Overland Track in Tasmania - then visited us for a week or so.

We had to pad the seat of the Sea Leopard with a bit of closed cell foam to make him comfortable, and had a short paddle near Dodges Ferry to try out the kayak and its sail. This was the first time Dave had ever used a sail on a sea kayak. Then it was off to Fortescue Bay for 2 days.
The first day we went through the gap at the Candlestick, and down the coast a little way to the big cave there. 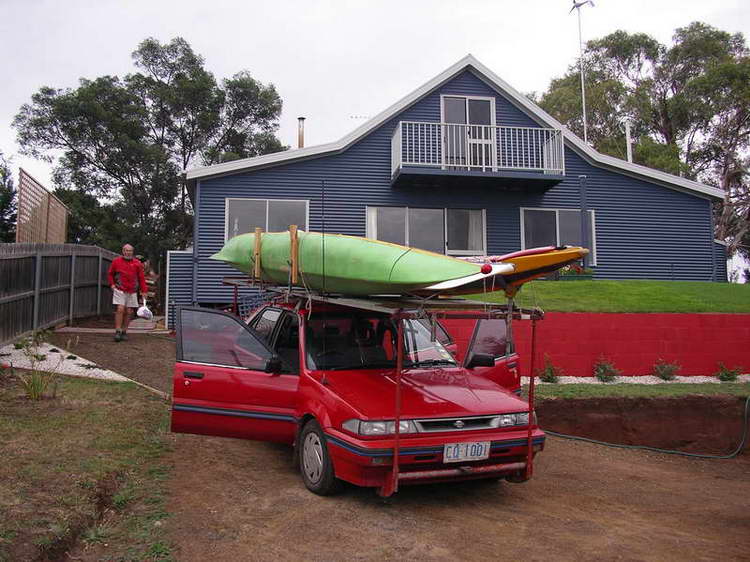 The little Pulsar with the three sea kayaks loaded. 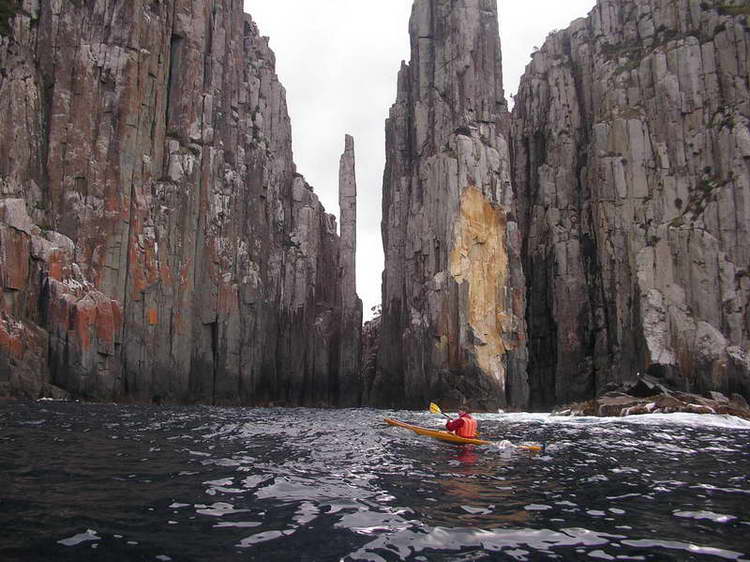 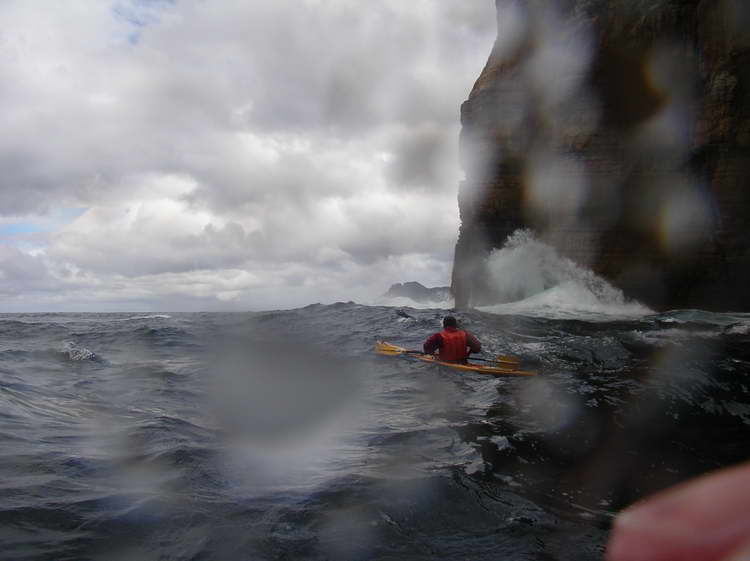 Near the cave entrance.

However, there was a reasonable swell running and made it impossible to get into the cave (unless your name is Mick Verrier). So after returning to the campsite he and Elli went for a walk out to the Candlestick and Totem Pole - only to find that while we had been paddling through the narrow gap in the middle of the day, there had been climbers scaling the Totem Pole. We were also camped near members of the NW Bushwalking Club, who were preparing for an overnight stay on Tasman Island. They were being taken down by a boat from Eaglehawk Neck, and then would probably have to swim ashore, with all their gear suitably waterproofed. The boat would return the next day for them.

Day 2 Elli drove the car up to Pirates Bay while Dave and I paddled, and managed to get into quite a few caves and arches. We even went right into the Blowhole and out again. The wind at the end was gale force, and the paddle into Pirates Bay was only just possible against it. 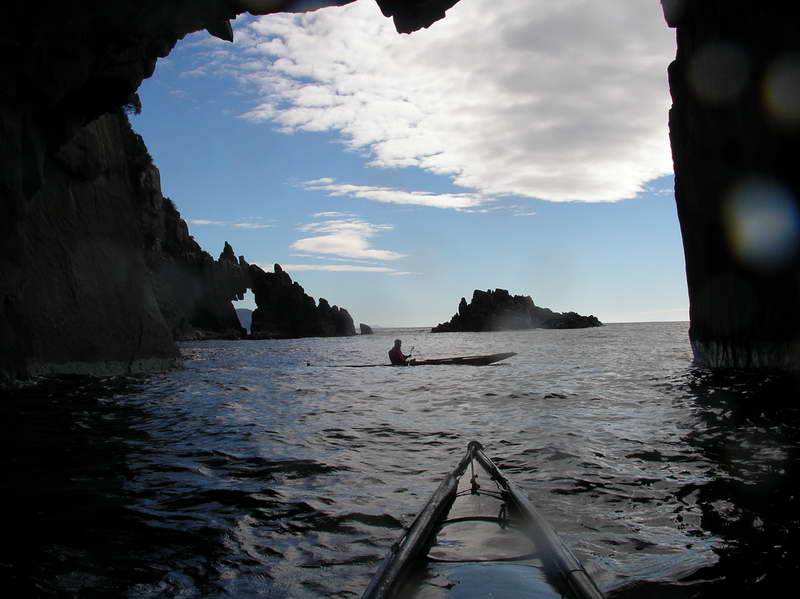 A few of the caves and archways of the Tasman Peninsula. 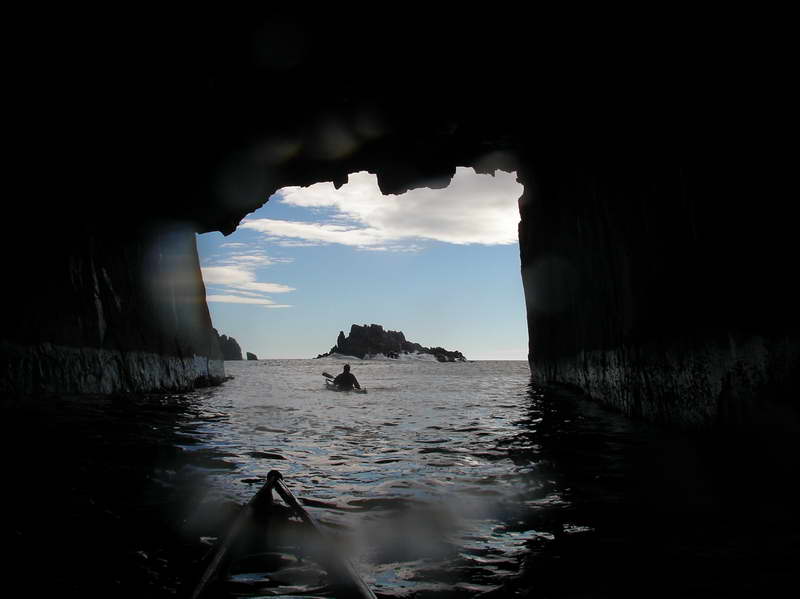 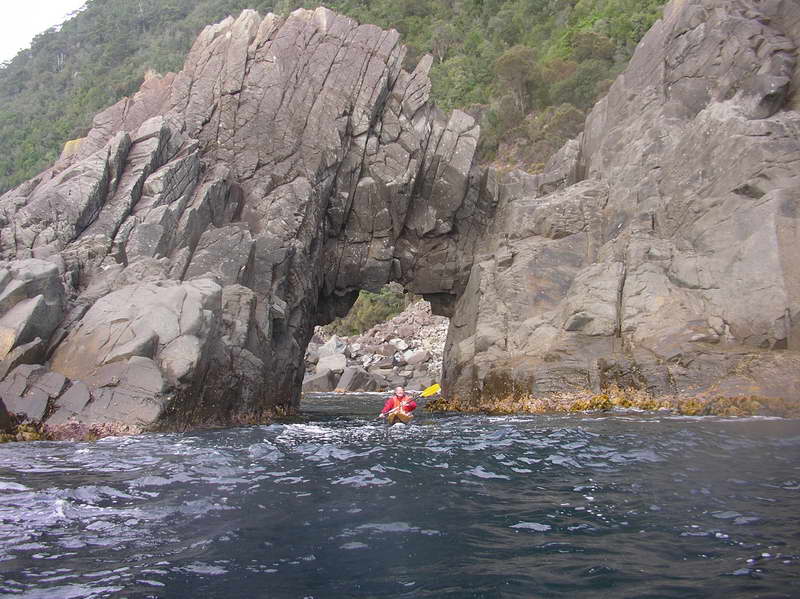 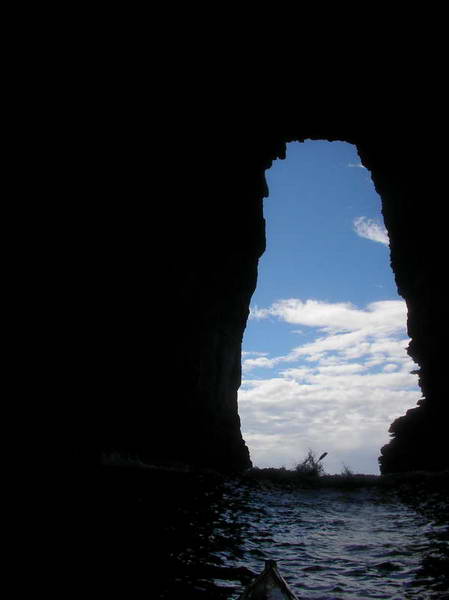 Dave going through Patersons Arch just as a swell broke.

Tourists at the Blowhole. 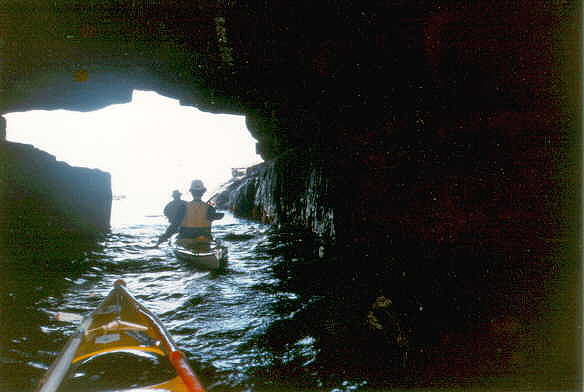 The blowhole (but not this trip) 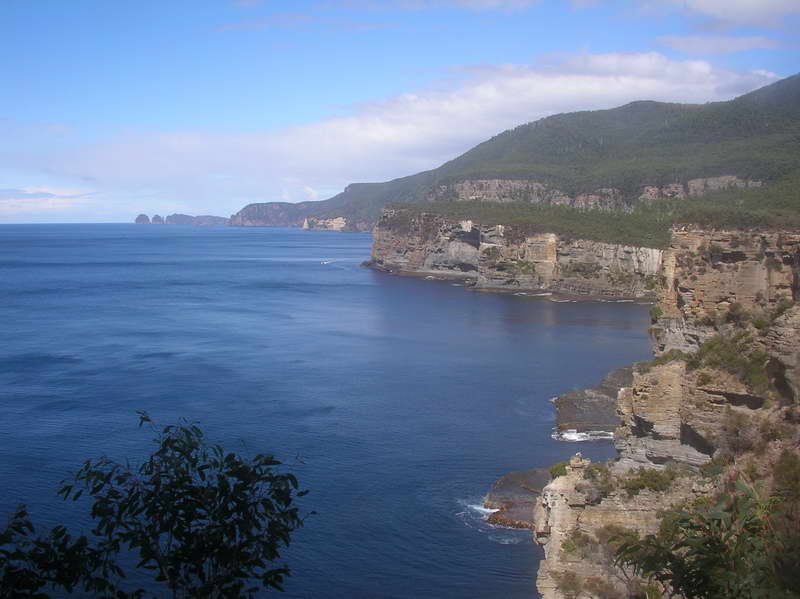 The coastline we had just paddled - Cape Hauy and the Candlestick in the distance.

Then it was home for a shower, before heading off the next morning to paddle to Maria Island for 3 nights. In view of the northerlies forecast for the next few days (which never eventuated) we went across to Point Leseur and then along the coast to Darlington 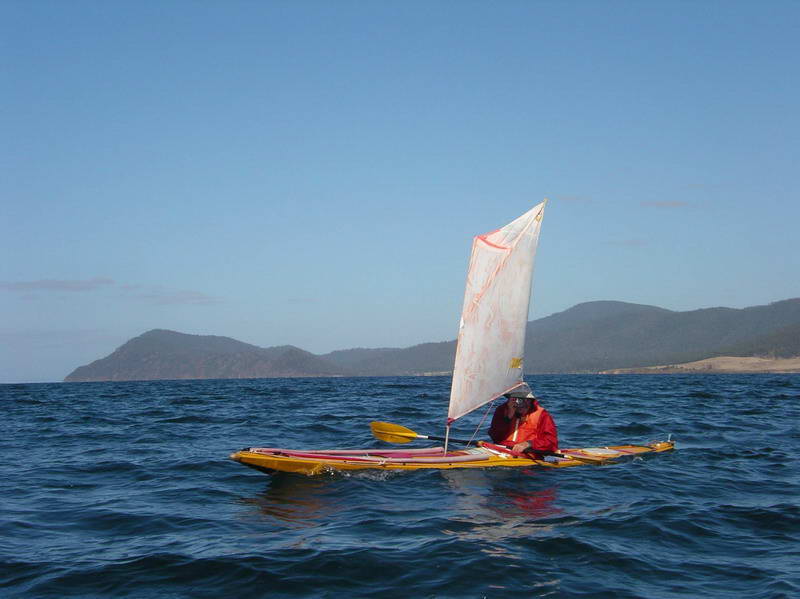 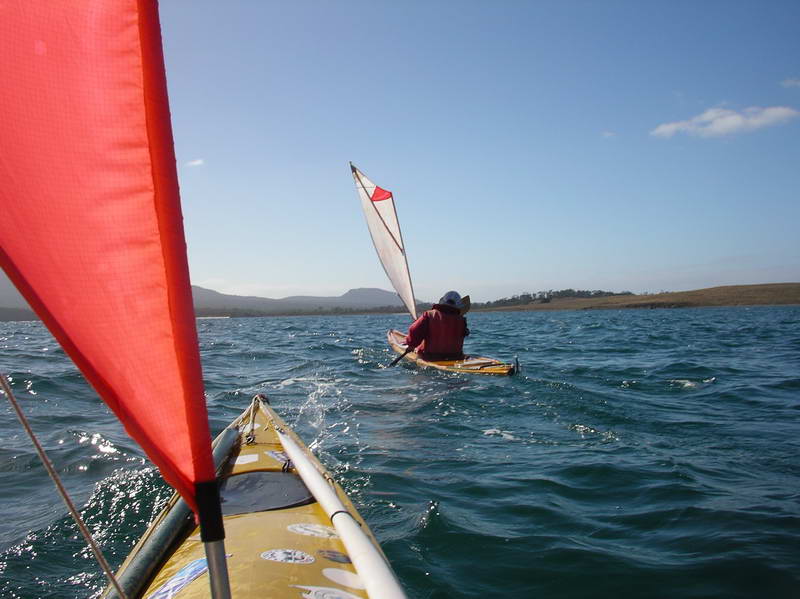 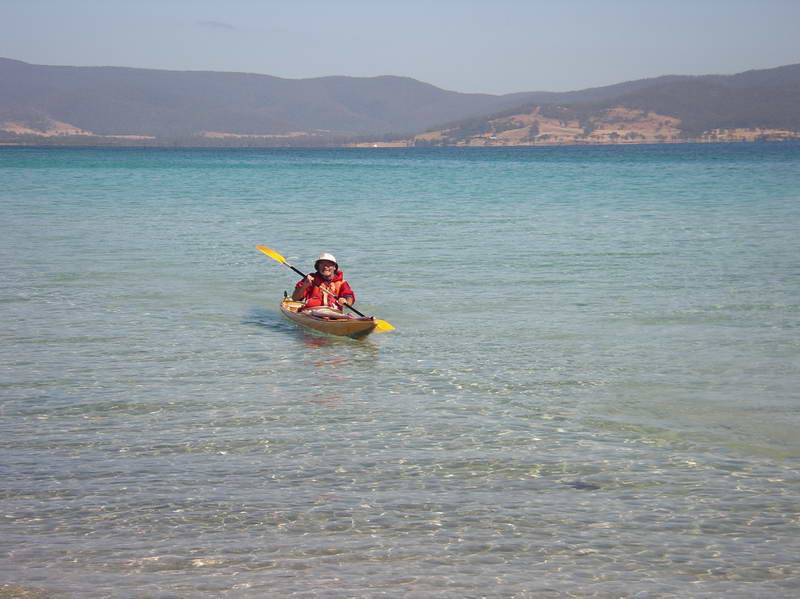 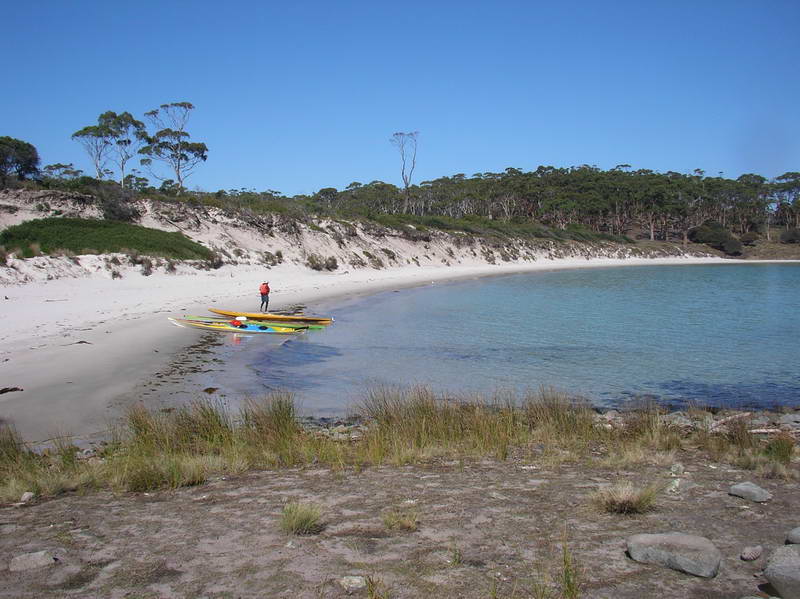 - where we hauled the kayaks across the beach into the small creek and paddled closer to the campground. This was midweek, and would you believe that there was a high school also occupying the campsite. However they were extremely well behaved and managed by the staff, and it was a bit of fun having them there. We had the only campfire going, and every morning early when I stoked it up there would be several early risers standing around it to warm up, and toast their marshmallows. 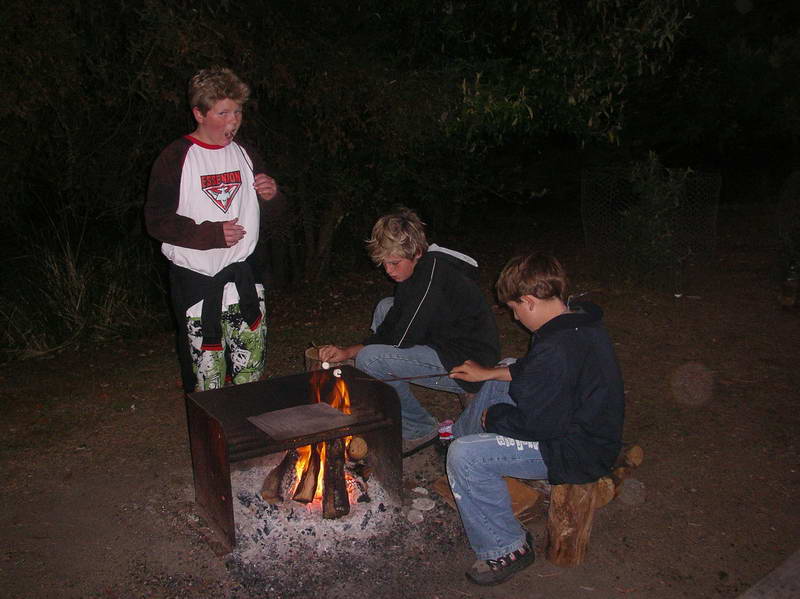 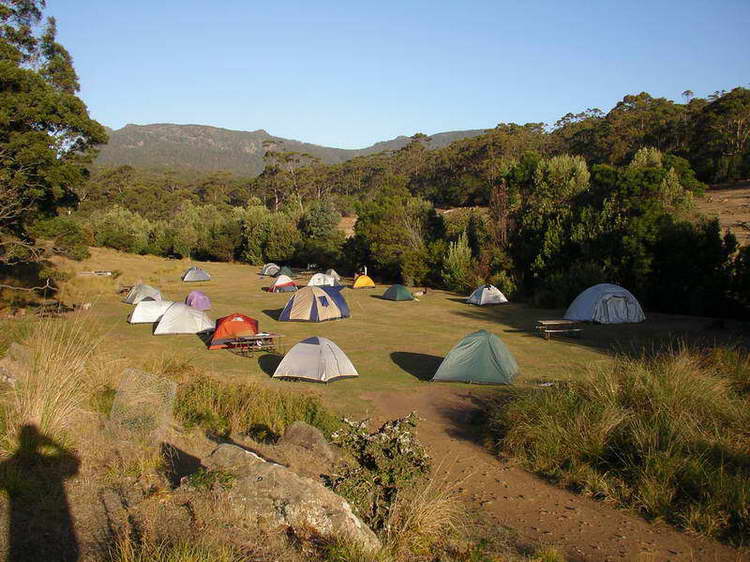 The Darlington campground, some of the school tents (some students were in the Penitentiary accommodation)

Our party inspected the Painted Cliffs at sunset, as well as sightseeing around the early convict settlement. Dave and I climbed Mt Maria the next day, then we all checked out the fossil cliffs. 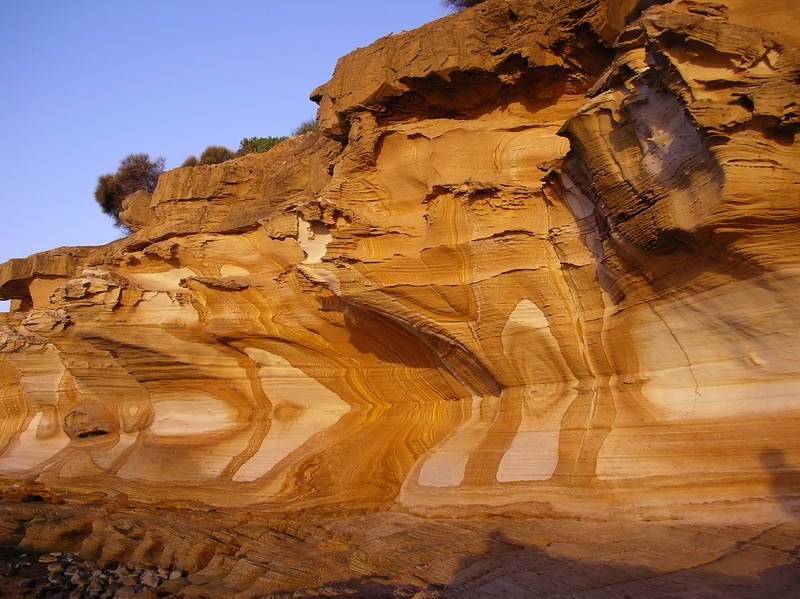 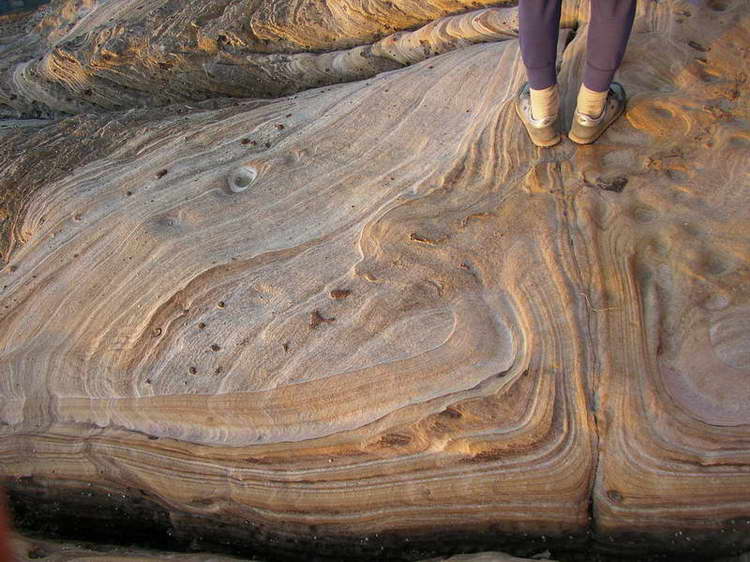 The third day was paddling back along the coast in ideal weather to camp in Chinamans Bay at Encampment Cove. The convict cells were inspected, and French's Farm, and Reidle Bay beach.

The fourth day was an easy paddle/sail back to the car at Earlham Estate, then drive to Coles Bay to camp in the Freycinet National Park. Here I found that the camp sites are hard packed driveway gravel, which my tent pegs wouldn't even look like penetrating - so using the tent was out of the question. This was my chance to introduce Elli to the marvels of camping just under a tent fly - in the rain I might add. I used the breakdown paddle for poles, and tied the fly down to a kayak decklines on one side. She and Dave (who's tent was free standing) were a bit doubtful about the warmth of this setup. We used the unfolded tent as a ground sheet, and draped the tent fly of the tent over the sleeping bag to keep any water drops that blew in under the main tent fly off. (The next morning Elli claimed she'd never had such a warm night.) 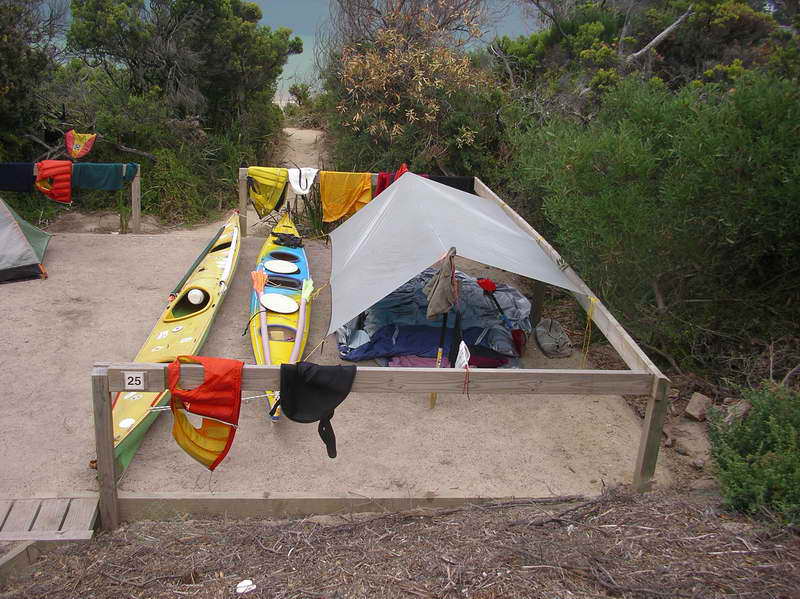 After setting up camp we drove over to Sleepy Bay and walked down the track to the small pebbly cove, then out onto the rocks on the other side. We noticed some walkers coming down off the nearby peak of Mt Parsons just as we were leaving, but went on to have a look at the lighthouse. Back at camp Dave decided he would whizz up Mt Amos on his own, which he did very comfortably in what was left of the day. We dined in the pub at Coles Bay. 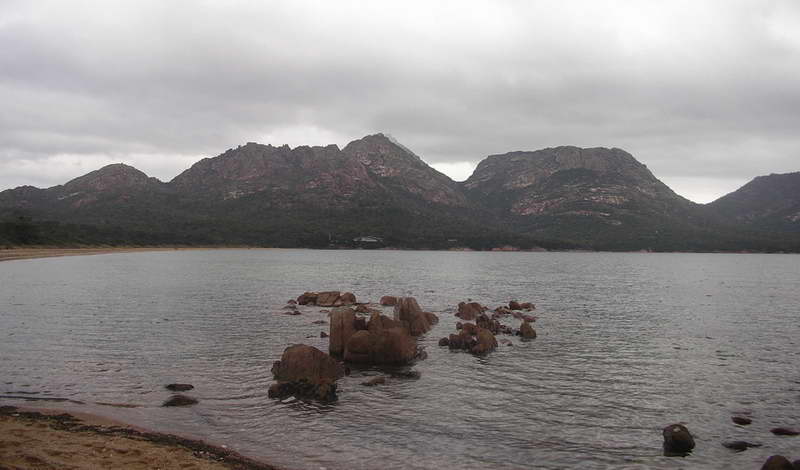 The Hazards, Mt Amos the flat top one right of centre.

The following morning it was very inclement so we packed up and scooted for home, and a meal at Shipwrights Hotel before Dave left to go on to Samoa via New Zealand.

PS. After Dave had left, Elli and I had a couple of days to spare, and the weather looked good so we nipped back up to Freycinet and followed the track from Sleepy Bay. It went to the top of Mt Parsons - the eastern peak of the Hazards. We had to search for track markers in a couple of places, but it was a great hike.
Here are a few photos: the last one is of the Hazards from the Tasman Highway. 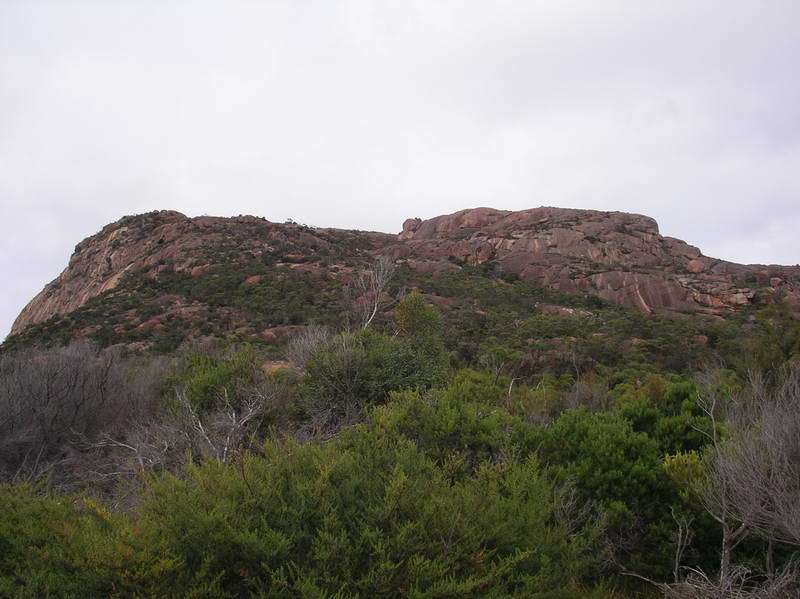 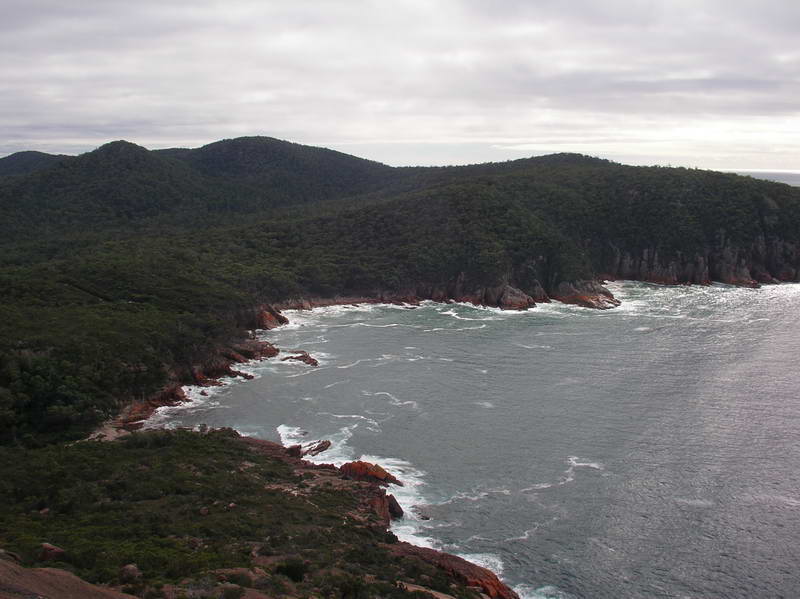 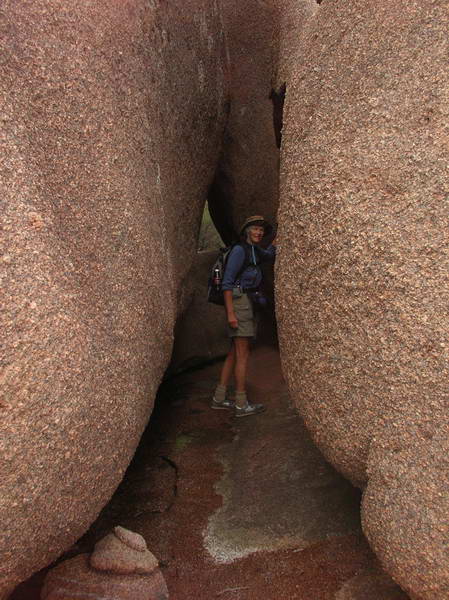 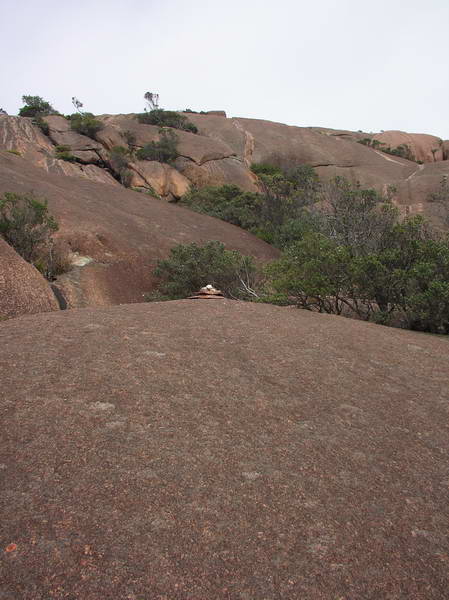 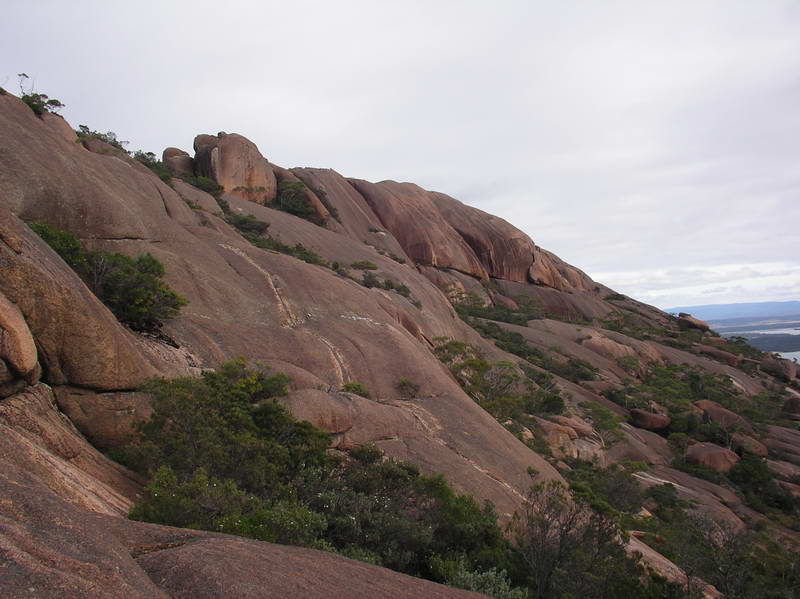 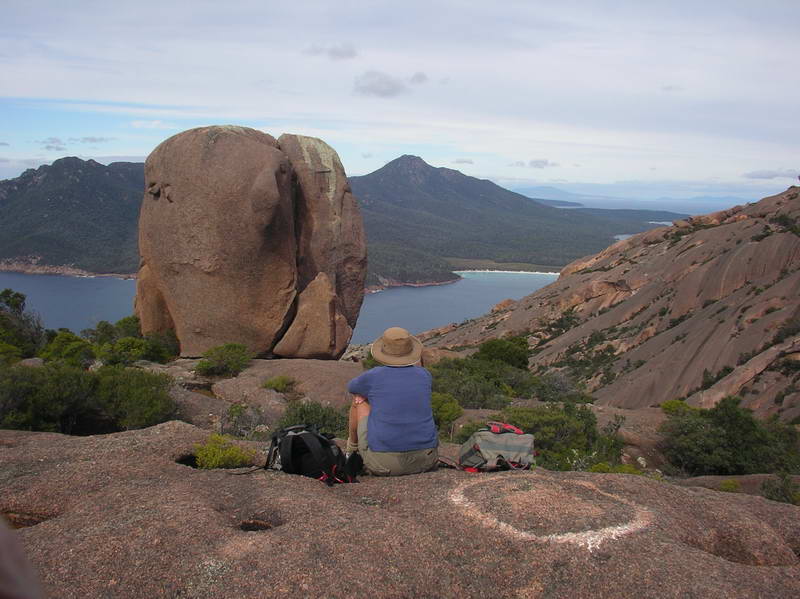 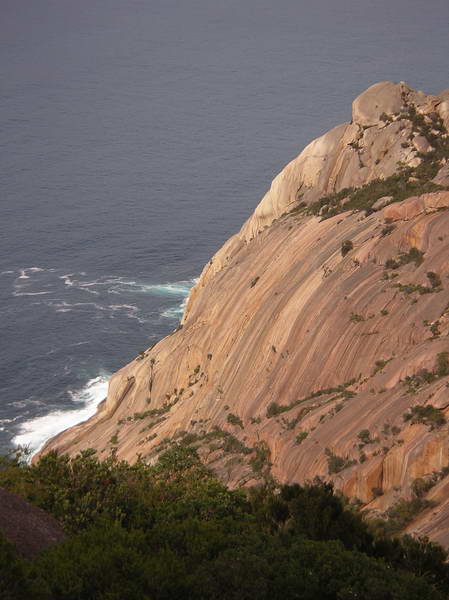 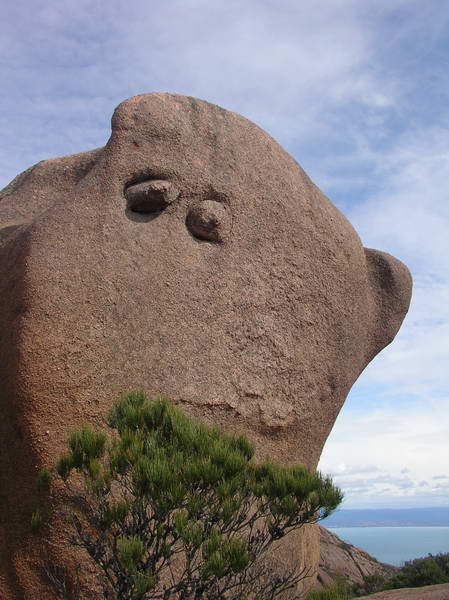 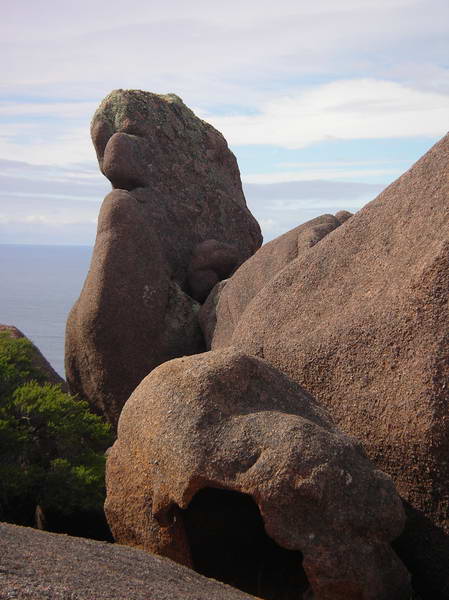 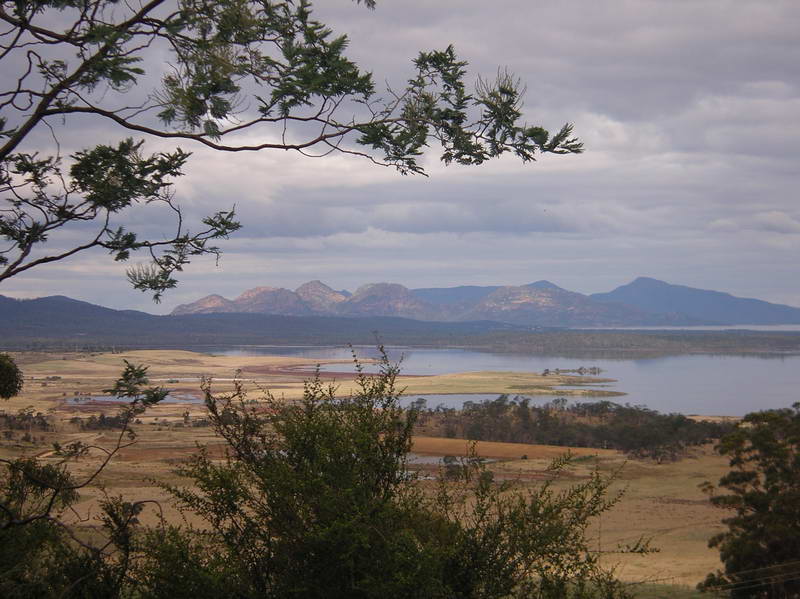