For someone who had just flown from the far away snowy woods and frozen lakes of New Hampshire in the northeast corner of the US, paddling to Hunter Island with Laurie Ford was pure delight. Forget that the weather was poor... that gale warnings prevented our getting to Three Hummock Island. For me it was an exhilarating chance to be in waves and wind, rain and sun, and on salt water learning about currents, tides, weather and forecasts.

Laurie called into chat to Bob & Beryl Bush on the long drive up. Bob is a Maatsuyker Club member, and we tried to talk him into paddling with us, but he already had other commitments. We camped on the mainland at Stony Point on Tuesday night, the 20th, with rain ending and allowing an evening of stories by a fire in the low cooking grill in front of the picnic shelter where we slept. I even got to hear the raucous kookaburra call. Wednesday morning, the 21st, we drove over to Robbins Road to load the gear into Laurie's longboat and the Greenlander I was using and to be on the water at 8:45 in order to clear all the sandbanks. I learned to watch for rows of standing black swans indicating shallow water to avoid. 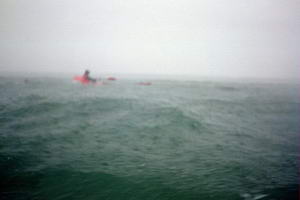 We put up our little front deck sails and sped past the Wallaby Islands and towards Kangaroo Island as a thunderstorm opened around us. Since I am an electric storm junkie (well, from the comfort of my home porch rocking chair) this added an adrenaline rush. Coming up either side of an immature black swan we held him just long enough for me to look in his eye and stroke the soft feathers of his sturdy body. Always thinking that swans at parks are nasty creatures who will hiss and attack I was charmed by this wild bird’s passivity. Later a flock of muttonbirds sped by. And I learned about the air monitoring station at Cape Grim, which measures the pollution-free air flowing up from the Antarctic and sets a base standard for other stations around the world. 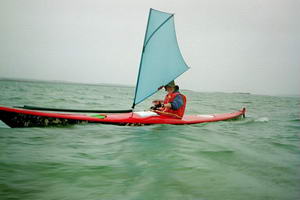 First time with a sail.

We were over at Woolnorth Point at 11:30, approaching through the tidal ‘overrun’ to hear the dramatic sound of rip water coming over the rocks. We pulled in by the small boat wreck there through a little current near the beach. Waiting for the tide to change I munched the last of last night's sandwich, had some water, and then was happy to be back in my cozy boat with long bare legs tucked under the spray skirt.

At noon we decided not to wait for the end of the tide and crossed over to Weber Point on Hunter Island with our previous nornoreasterly now changing conveniently to southeasterly for a nice sail across  (but still paddling to keep warm). We passed a couple of small islands, also rocky outcroppings with surging waves, and saw Trefoil and Steep Islands off to the west in the rain. At home my boat is a little Necky ‘Gannet’ (perfect for our lakes) and I was entranced to have Laurie point out two white gannets with their yellow head feathers. As we came along either side of them they reluctantly took to the air and I had a good close view. I had only seen one once before, at Prince Edward Island in Canada. 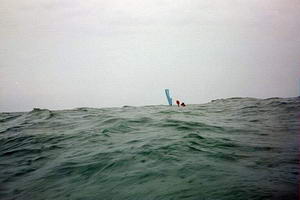 Passing Stack Island and Renard Point we sailed on up along the eastern shore of Hunter. Such clean and gorgeous beaches – no rusted lobster pots, no debris, no ship timber, and no Styrofoam chunks. Stopped at one beach long enough to stretch before heading on North along the stretch of rocky points, following Laurie through openings and waves. Saw a sea eagle high on a dead tree atop the cliff. And passed the cave that is way high in a cliff. Apparently aboriginal traces from several thousand years ago are inside. 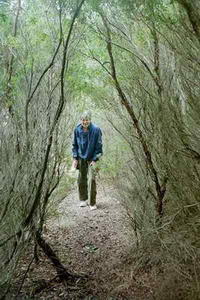 Track to campsite in Shepherds Bay.

I was glad to reach Shepherd’s Bay at about 3:30 – was it really 40 kilometres we had done on this first day? The sailing of course cuts that mileage way back in terms of energy spent and it will be hard to return home to a kayak without a sail! Rain continued as we carried our gear up to the hidden camping spot and pitched my tent and rainfly so I could get dry and warm. Laurie heated up water for a cup-o-soup for me and then, without being aware of it, I dropped off to sleep.

A crow woke me an hour or so later – that hoarse cry of ‘get up..get up’ mingling with other birds so that I realised if birds were singing rain must have stopped. Came out to sit by the fire, have crackers with cheese, an apple, and wine, and enjoy a relaxed evening, talking and quietly marvelling that this was really me, here!

Surf on western side of Hunter Island.

Thursday, the 22nd, was sunny and warm but with gale winds forecast that could trap us a few days over on Three Hummock Island. So we stayed put on Hunter. After my OJ, muesli and chocolate covered coffee beans for breakfast we walked North along a track and then down to the west shore to watch huge waves rolling in and to look out across at Albatross Island. On the track we went through a shady section of shaggy gum trees with a floor of ferns beneath. At a sunnier section a dozen flitting butterflies surrounded us. And then there were the cow and calf plunging from the bush and surprising themselves and me!

Back to the bay for peanut butter and crackers and a carrot, and naps on the warm beach rocks, and a quick ‘swim’ to get clean. Stranded pools in the rocks revealed snails moving infinitesimally, tiny sand dollars and sea urchins. Finally, at the end of this nice lazy day, I had a bowl of spaghetti and a cucumber salad by the fire and then wine in a Maatsuyker Canoe Club cup.

Friday, March 23rd, had passing rain sprinkles. Climbed the rock bluff above camp to look at sea conditions as we waited for the full weather report at 12:35. No improvement predicted so it was time to head on down along Hunter toward Weber Point. Strong southwesterly wind meant that rounding each of the points was a good workout. Laurie said to stay close in to the rocks and then follow the shoreline to take advantage of calmer paddling and a few moments of rest before the next point. No sailing into this. Pretty soon I was over my fear of being that close to big waves breaking on big rocks. I love the swells and chop and watching the water and billows slide under my boat. We pulled into Cave Bay in the rain to stretch and Laurie went to check out the various sheds near the slipway where the lone farmer of the island drives his cattle onto an LST boat to take them to the mainland. One was open and dry and with a sandy floor and we decided to move right in… only to find that the little Coleman stove in its grey bag had been left behind, invisible on the grey stones at Shepherd’s Bay! So back went Laurie, making tracks with two sails up for the down wind leg. He got to see six dolphins coming along through Hope Passage. I was happy to be dry, moving things around so that a pallet covered broken glass and became a table, yards of nylon cloth became sitting areas, and an aluminium ladder served as clothes drying rack.

When Laurie first started out a Cessna plane circled the beach low under the heavy rain cloud and headed north. The plane returned later and circled just after we had carried his kayak up to the back of the beach. The rain tapered off when he got back around 5:30. We wondered why the pilot was out so low on such a day. We ate by candlelight with the last of the wine, Laurie feasting on his crackers, butter and peanut butter, and me having cucumber and egg salad and spaghetti and parmesan. Bless the farmer for not locking his shed! In the middle of the night stars were out and Laurie took a walk down the long beach.

Saturday, the 24th arrived with a beautiful sun rising from the sea and the 6:00 weather report promising a sunny morning with light fresh northerly breezes. To time our arrival at Robbins Road correctly for high water we went for a walk to the farmer’s homestead in the middle of the island. The house was locked and it seemed the farmer was taking advantage of the better weather to go ashore. Looked around the fruit trees, sheds, pastured horses, radio tower, and old vehicles and filled a soda bottle with water from the rain cistern. (We weren't sure at this stage whether we'd go across to Walker Island for the night, or go home a day early)

Packed up and on the water again by 10:00, sail/paddling out to Penguin Islet to watch some pelicans and then off across the choppy water of the deep channel to the turquoise shallow water over the sand banks. What a happy feeling to be drifting along with the sail up, the paddle for an outrigger, the sounds of water and breeze, the sights of birds and islands, the sky clouding up and glowering behind us. I could see Laurie’s two sails way ahead but made no effort to keep up as I wanted to prolong this experience to its last possible moment. Three hours later we came ashore, changed and got the gear in and on the car just as the skies opened up with the next rain from a new low. Headed off five hours down the road to Orford, near Hobart. 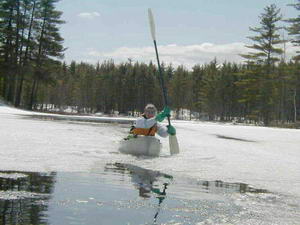 Elli in ice, back in New Hampshire.
(Photo courtesy of Cheryl White)

Throughout I could not believe that I had been so lucky as to chance on Laurie’s web site one day back in November and that I could hook up with a master kayak mariner for such an experience. All his knowledge made my quick trip worry free and I got to play in Tassie waves! I hope I’ll get back to Three Hummock Island some day.