Having got a taste for sea kayaking again, Elli and I decided it was time for an overnight camping trip to check out all our camping gear - which hadn't been used for 2 years. Later in July we would be joining paddlers in Virginia to paddle the Barrier Islands for three days.

More interested in just going anywhere, rather than some long expedition - we found an island owned by BPL (Bureau of Public Land) which is run as a camp site. This was not far offshore in Casco Bay, a bay full of literally dozens and dozens of islands - all within sight of the fairly large shipping port and city of Portland.

So we arrived in Portland one overcast morning, avoided the fee for using the boatramp, and left the car parked in friends place a 100 yds away. There were small ferries putt-ing about, lobster boats checking out their numerous pots, and of course plenty of pleasure craft. Our course took us between Great Diamond Island and Little Diamond Island, then between Peaks Island and Long Island - then we could see our destination of Jewell Island. It has a distinctive tower towards one end, and we cruised across in flat calm conditions. The island has many campsites and could probably accommodate 200 campers. There were plenty of toilets scattered around the island. During the summer there is a permanent caretaker living in a big tent, but he was absent during our stay. 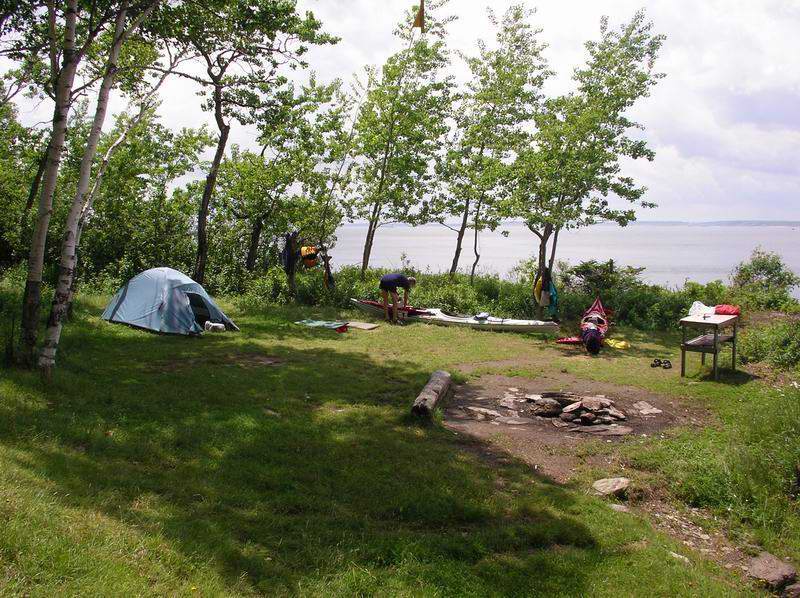 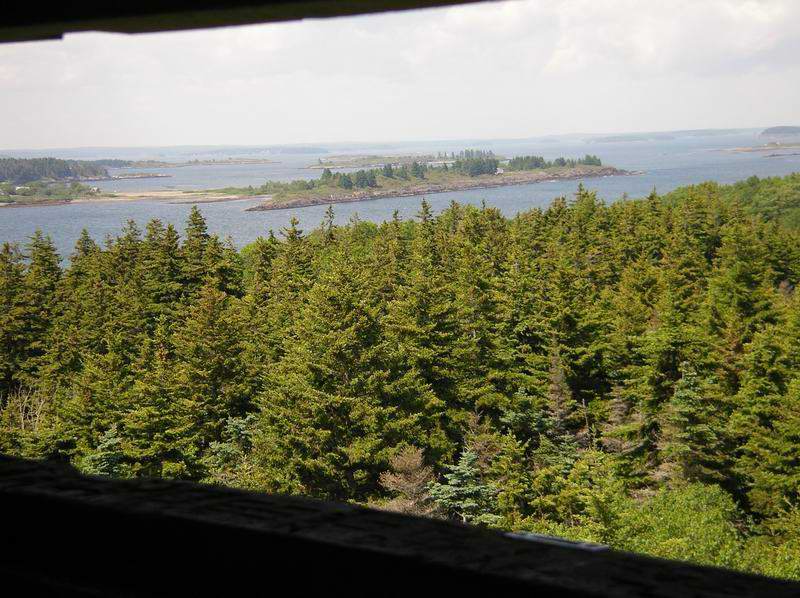 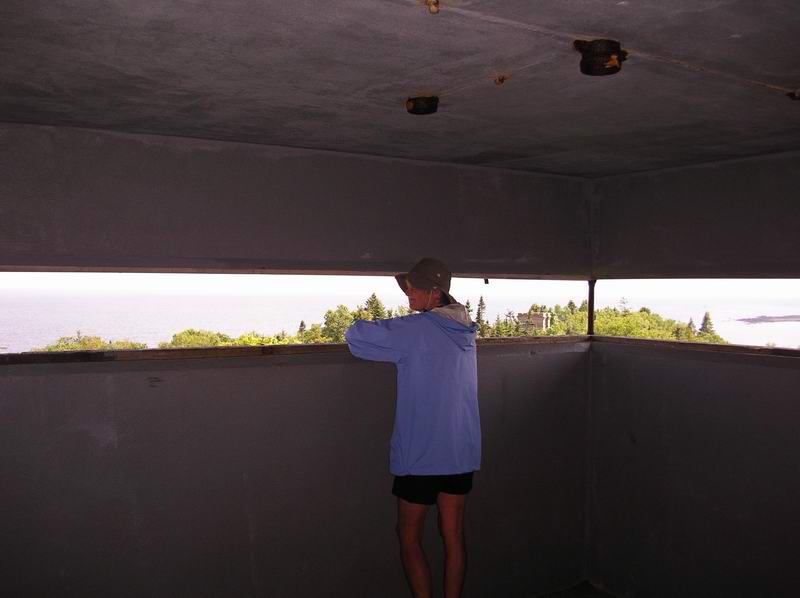 We found we had the island to ourselves, and set up the tent in a lovely little site overlooking the water, with its own private little landing bay. Apart from the millions of mosquitoes, this was a great spot. We spent the afternoon circling the whole island on foot, checking out every campsite - and the old military structures. These  included a couple of tall spotting towers, plus many gun embankments, and the remains of living quarters.It was a good island to spend time on - much better than some of the islands which are no more than 100 yds long, and therefore very restrictive. There were 'fire' buckets at every campsite. 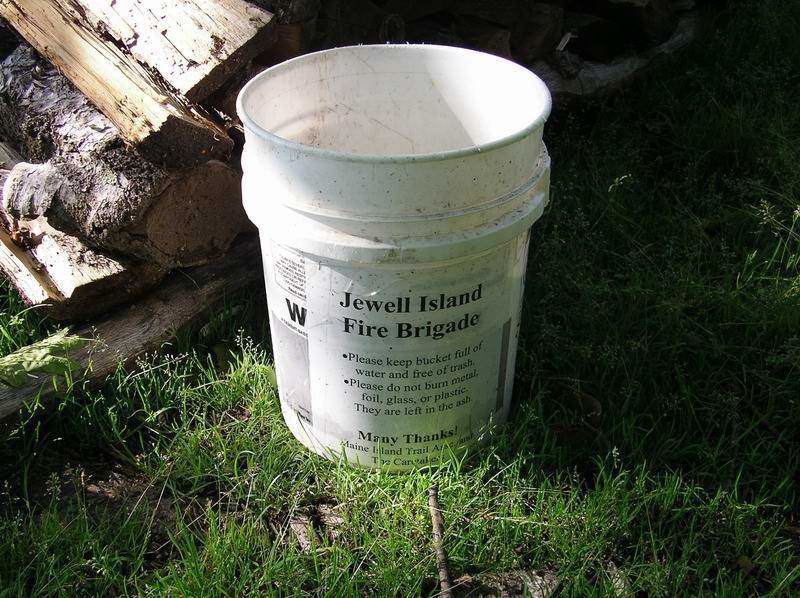 Just before the sun went down we climbed back into our paddling gear to go off on a practice night paddle, to circumnavigate the nearby Cliff Island - which is probably about 2 miles long. There were a lot of houses in a big bay just across from Jewell Island, so we paddled across to there to start with. They seemed to be mainly concerned with the lobster industry. As the sun went down we were on a beach talking to a lady mending a few hundred lobster pots, then we set off into the darkness. Elli and I had purchased a couple of flashing LED lights so we could see how good they were for night paddling.Our hats were modified to clip these onto. These were excellent for knowing where the other person was, without having to paddle within talking distance. It actually wasn't very dark by the time we got back to our campsite, but we'd been away long enough to find a yacht and a power boat had come in separately to camp 100yds either side of us. 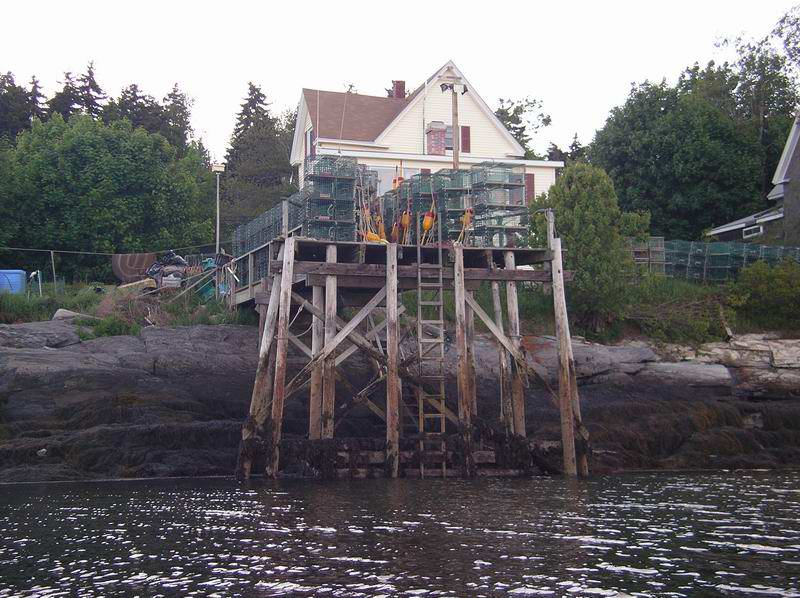 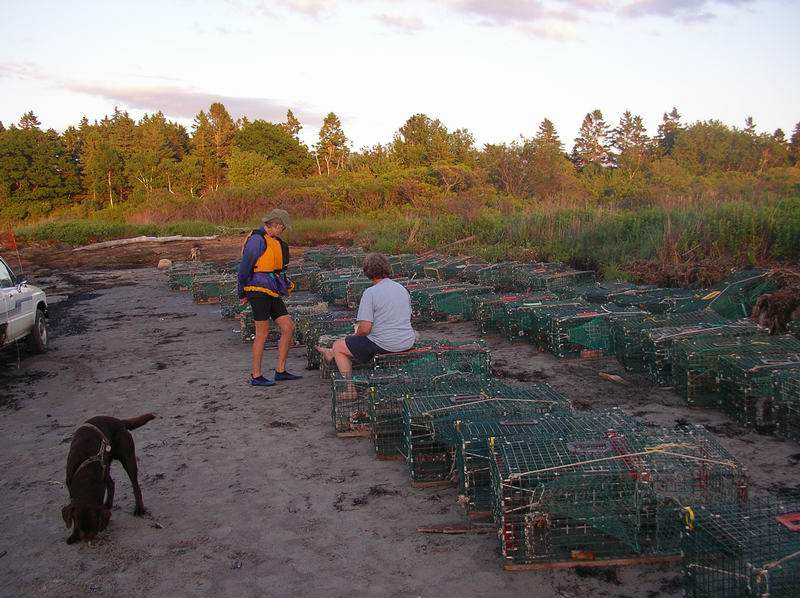 The next morning we had intended to laze around and then paddle across to Orrs Island, arriving there about high water. However the mosquitoes were so vicious we packed up and got on the water to escape them. Today was still calm, and we cruised past Eagle Island and Haskell Island into Merriconeag Sound. Arrived on the southern tip of Orrs Island before 10am, and lazed around on the beach for a couple of hours - after an unsuccessful foray to find icecreams.

Round about 12 noon we decided the tide was about to change direction, and we headed down the sound back into Casco Bay. A breeze from the SW sprang up, and freshened as the day went on, and we headed across to go between Great Chebeague Island and Long Island, then west of great Diamond Island. It was a long slog across here back to the boatramp, and we were glad to finally get ashore. 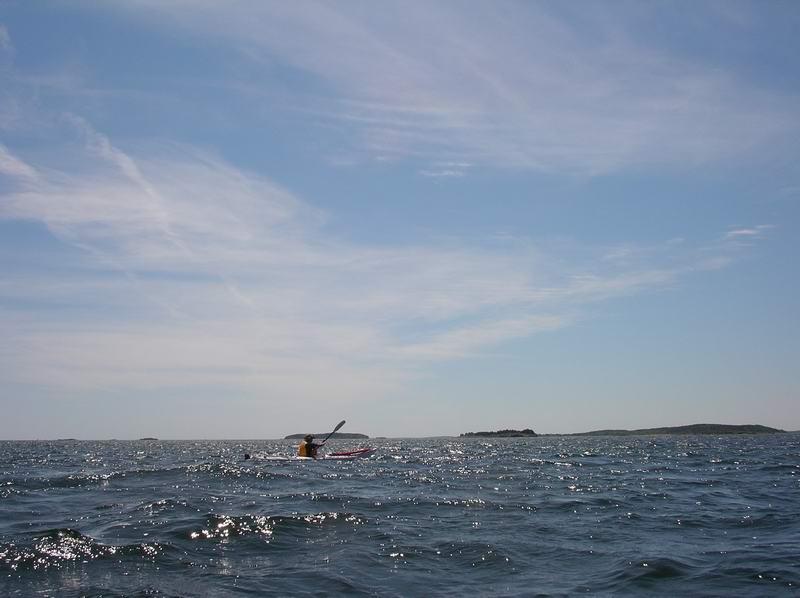 Day one we had paddled 7nm to Jewell Island,
and then 8nm to circumnavigate Cliff Island.
Day two it was about 6.5nm from Jewell Island to Orrs Island,
then 14nm from Orrs Island back to the boat ramp in Portland.
About 36nm for the two days, mainly in heavily laden kayaks.