At last I made it back into a kayak again, after a 16 month break without even sitting in one. This was the first time out paddling since the Flinders Island trip in March 04. I spent the next few months home in Dodges Ferry continuing with building the house, while Elli went back to the USA for her daughter's wedding. Elli returned for a couple of months for the Veterans Hockey Championships in October, then we both went back to USA in November to move into Elli's new house - having sold her big house on the lake to her son. We were in New Hampshire for yet another white Xmas, 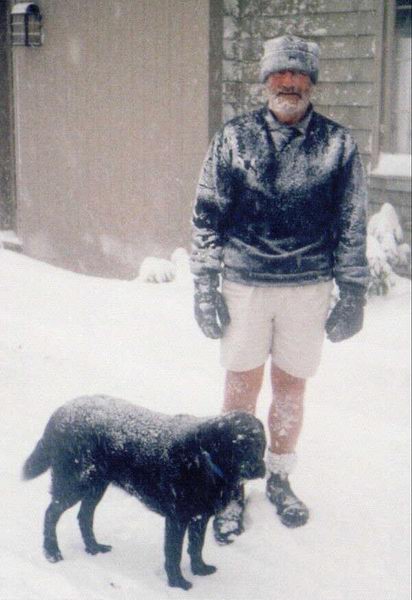 then back to Tasmania in January '05 determined to finish the house. We spent the whole summer on it, and nearly got there, but still a few small bits to do yet. There just wasn't time to even go for a day paddle - both kayaks stayed hung up in the garage.

Now back in the USA in June we had contacted a couple of groups of people to go kayaking with them, so we thought it was time to do a bit of training. We went to Portsmouth and the Piscataqua River and launched at Dover Point - miles up the river from the mouth. Two rivers flow together here, although one is mainly water coming out of Great Bay - which fills, and then empties every 12 hours. This place has a bit of a reputation for kayakers getting into trouble, and Elli wasn't too keen. But we paddled straight across the current coming out of the bay, and continued down river with a good current behind us. There was a headwind, and a yacht was sailing down also, with an outboard running as well. It was tacking back and forth across the river and we found it was easy to get ahead of it - they would have done better to take their sails down and just motor - but then I guess that is not sailing. 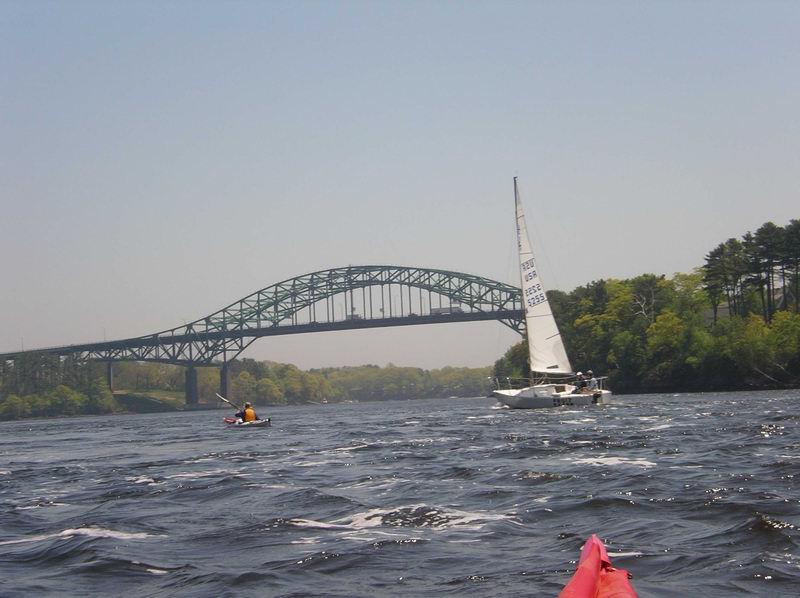 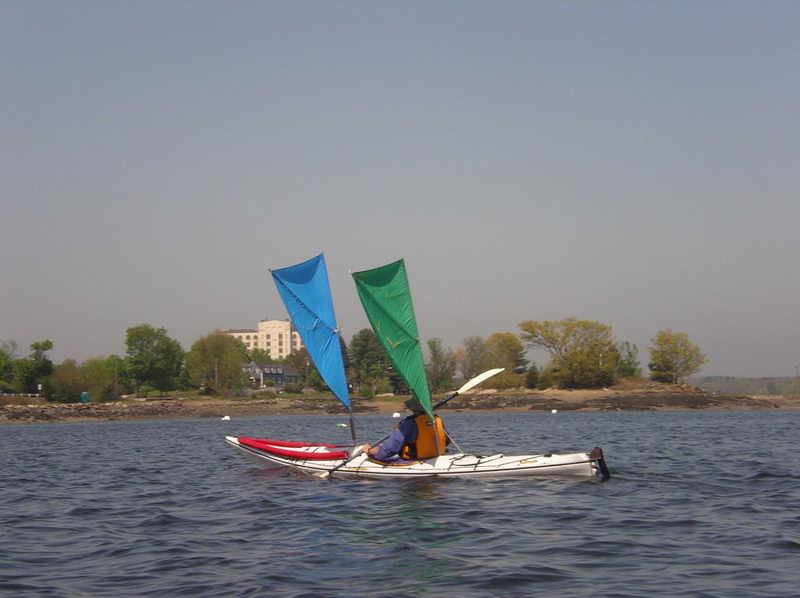 The river goes right through the heart of the city of Portsmouth (several big bridges) and past the large Portsmouth Naval Shipyard, where a submarine was being serviced behind canvas screens. We lunched on a private floating dock (aground because it was now low tide) and then went out to sea and around New Castle Island and back into the river. 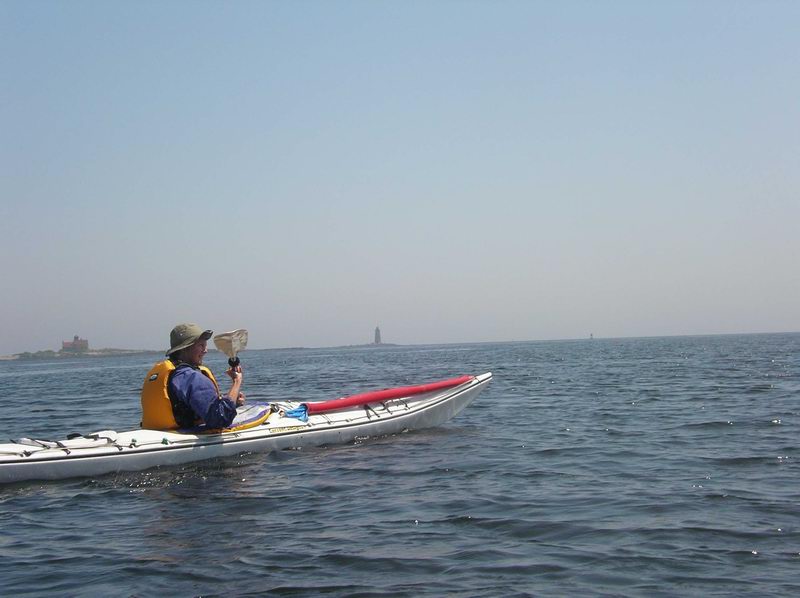 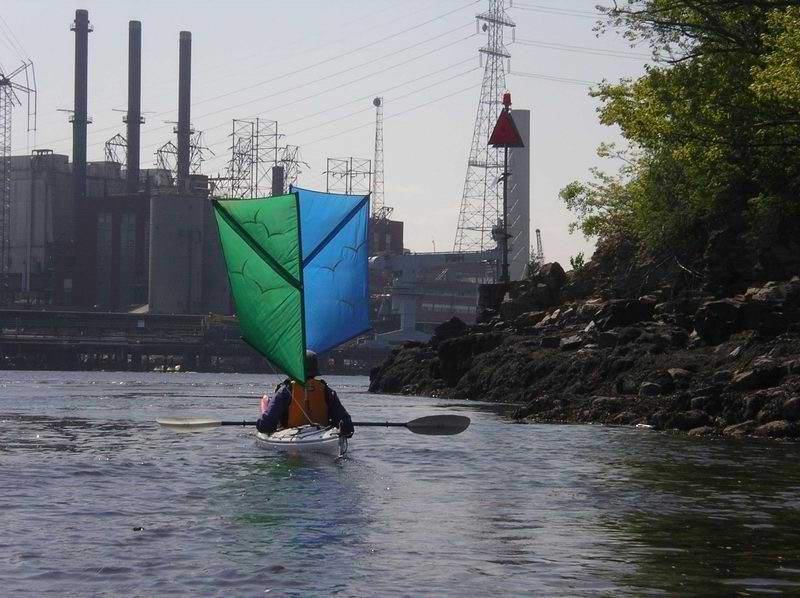 Although it was now after low tide the current continues to flow down the river for another hour or two, and we used a lot of back eddies to make our way back up the river. There were many moored boats along each side of the river, and thousands of lobster pot and mooring buoys - and we used these to indicate where the back eddies were. Half way back to the car the tide did turn and we had the current with us for the last bit. It wasn't a hard day but we did paddle all the way, there not being enough wind for serious sailing.

A few days later we drove to close by Squam Lake (where the film "On Golden Pond" was made) and paddled a 13 mile route on it, past many small islands. One island is actually an outdoor chapel which has been used regularly for services and weddings for 102 summers and so has much dock space. 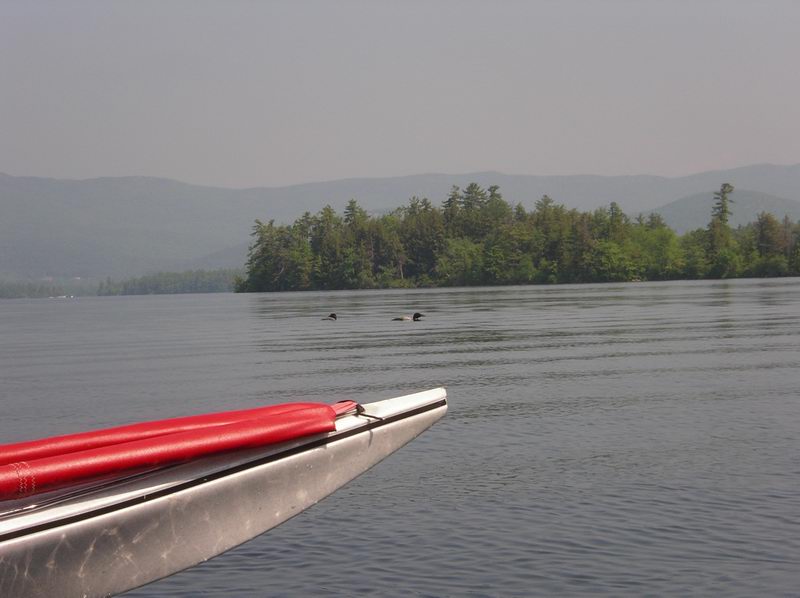 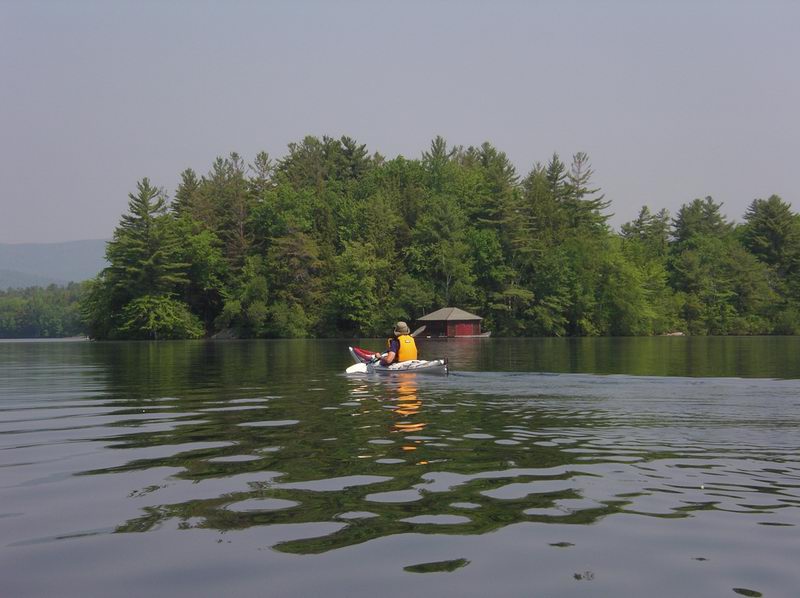 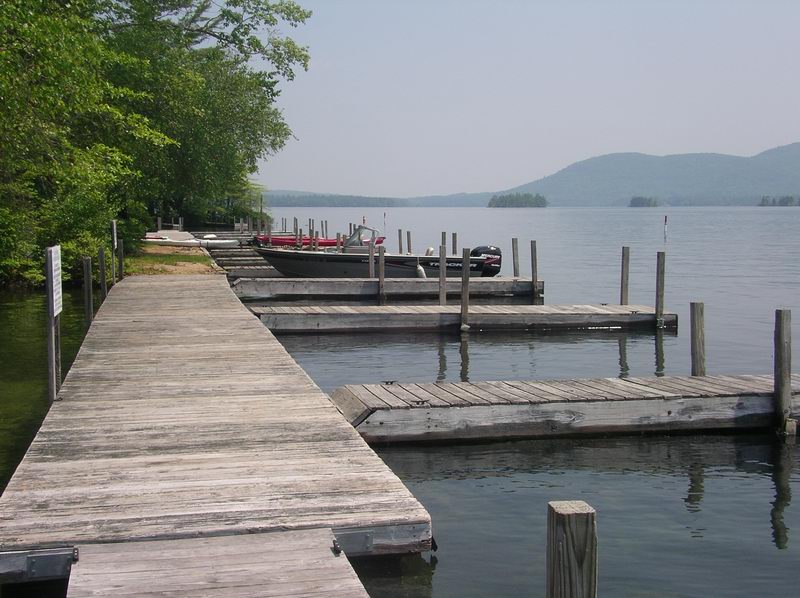 Then it was time for the unknown - a trip with Southern Maine Sea Kayakers Network, out to Seguin Island. We didn't have any idea of who they were, or what they were like, apart from their website. It turned out to be a bloody good trip, with a good lot of paddlers.

It's a bit of a culture shock to go paddling over here. The locals at all the small coastal villages object to lots of vehicles being left in their small parking areas, and at many of them you have to pay to be able to park. Not like Tasmania where you just drive to the shoreline and park where you like for as long as you like.

Elli and I made nine paddlers in all, meeting and launching at a place called Five Islands. There was one other female paddler.  Some people were having their first paddle for the year. It was dead calm, with the possibility of a thunder storm late in the day. 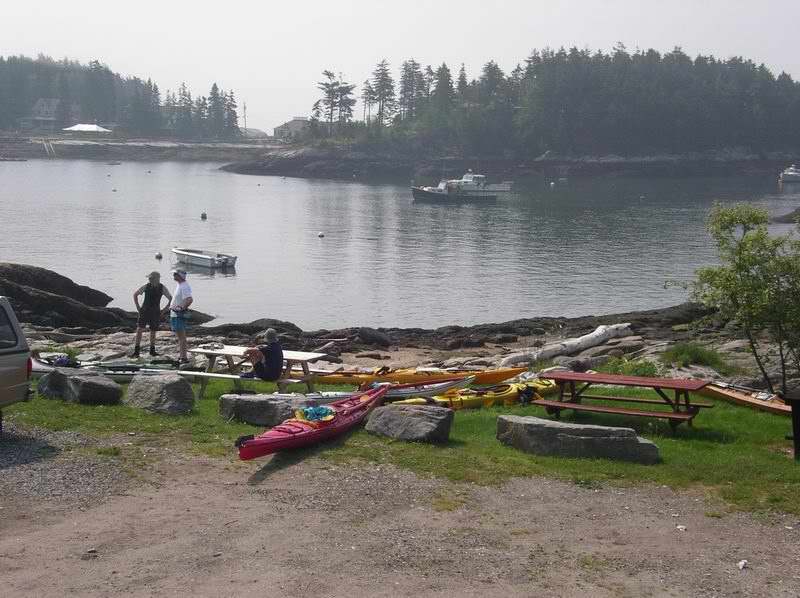 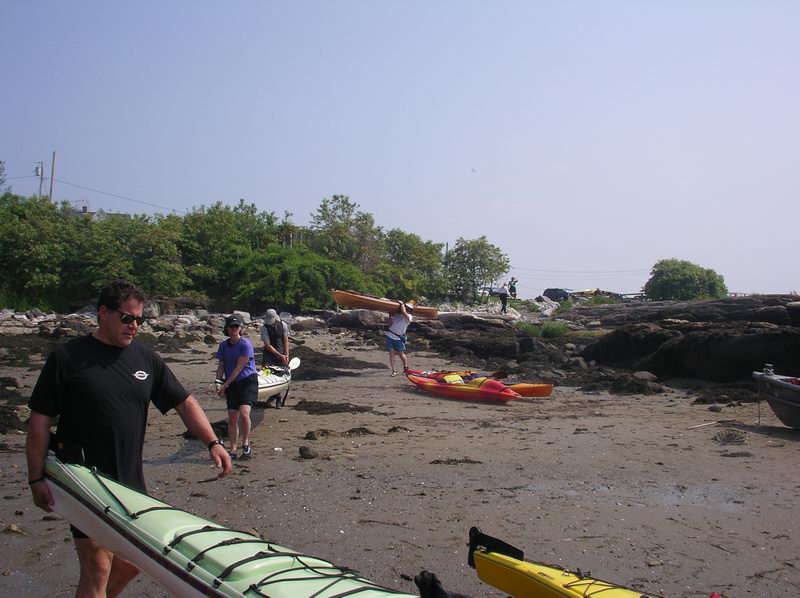 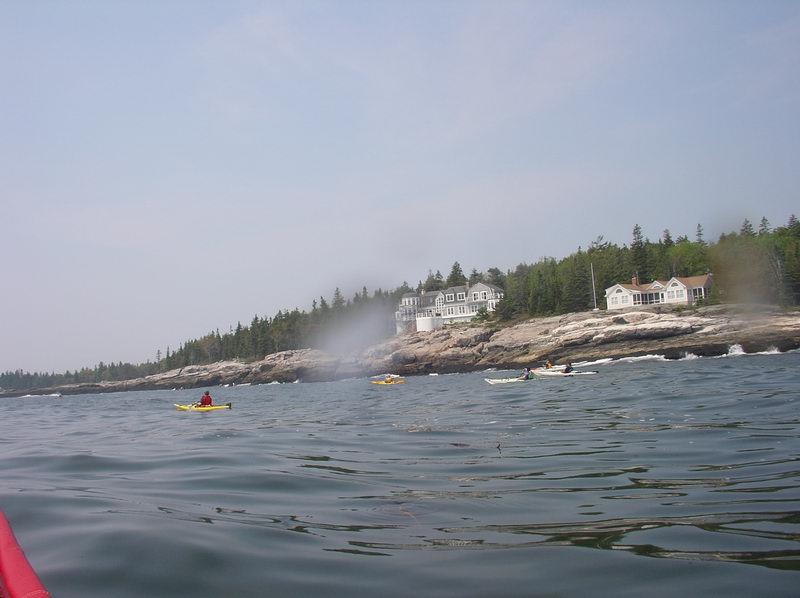 Visibility got less and less as the trip progressed, down to a few hundred metres at times. Our course would take us close to White Ledge which has a bell on it. This was heard quite close, but never a sight of the reef itself - which has claimed quite a few vessels in the past. Then the high Seguin Island appeared out of the fog, straight in front of us. This was dead reckoning navigation (and spot on). There was the odd GPS in some kayaks in case of emergency. 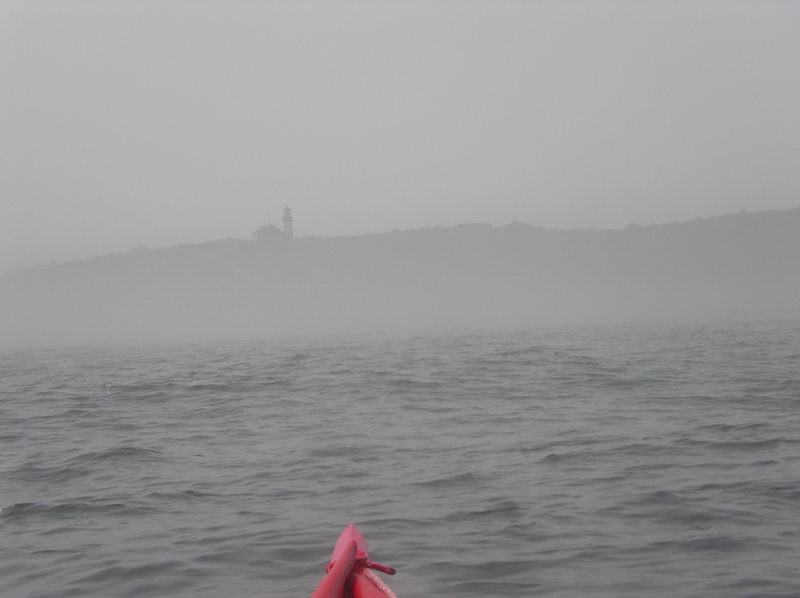 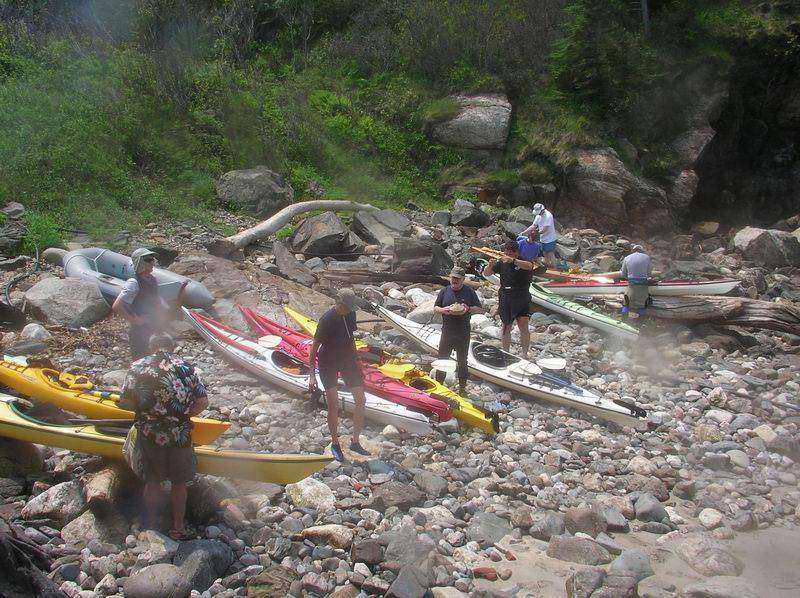 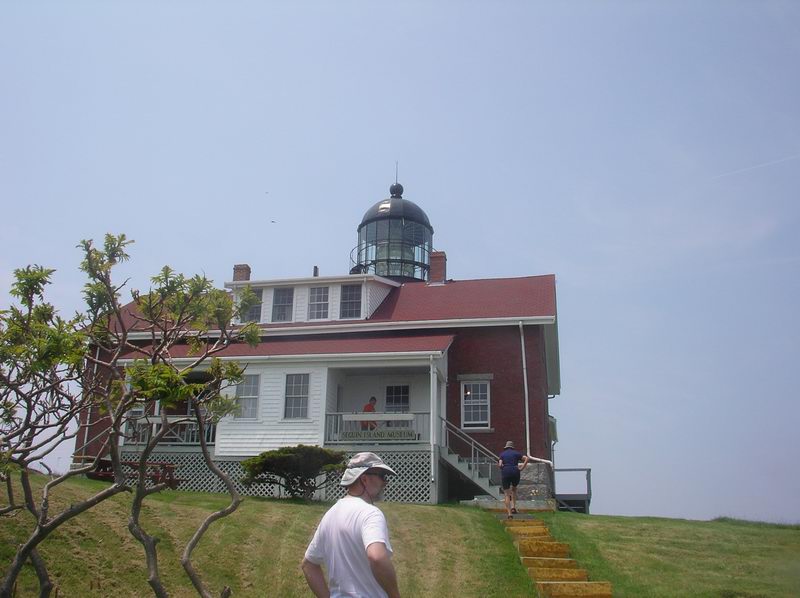 This light is the highest in the state of Maine (186ft above sea level) and the oldest (commisioned in 1795 by George Washington). More info on the lighthouse website. It has volunteer caretakers (similar to Maatsuyker Island), and a small museum (similar to Deal Island). We ate our lunch near the lighthouse, and went on an inspection tour of the light after. It does not rotate or flash - just a steady light, through a first order fresnel lens. 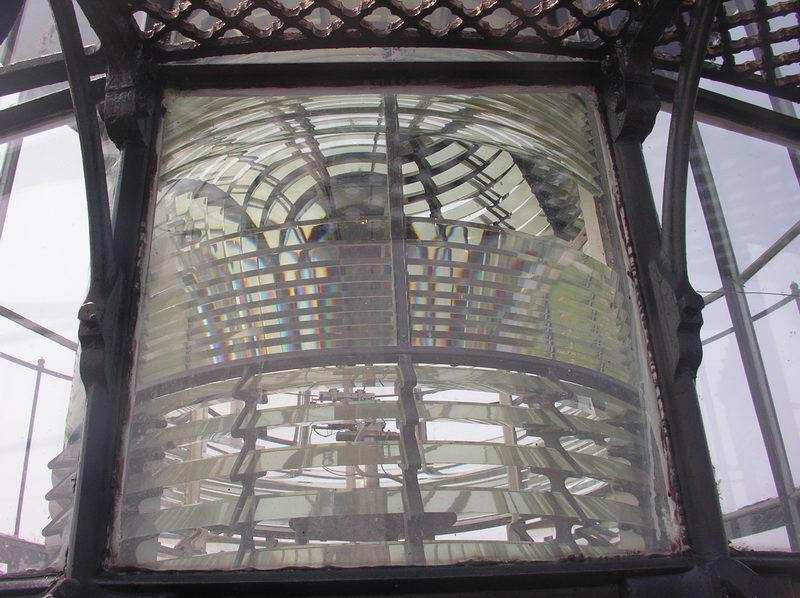 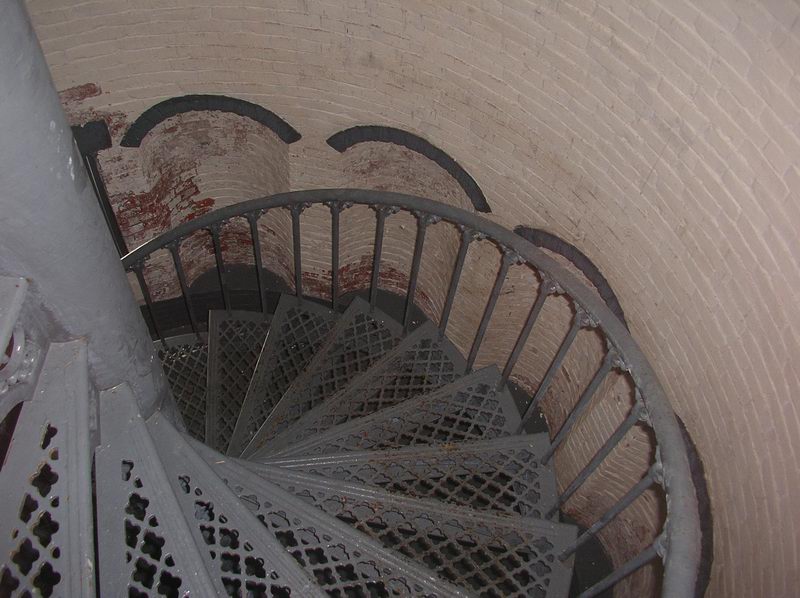 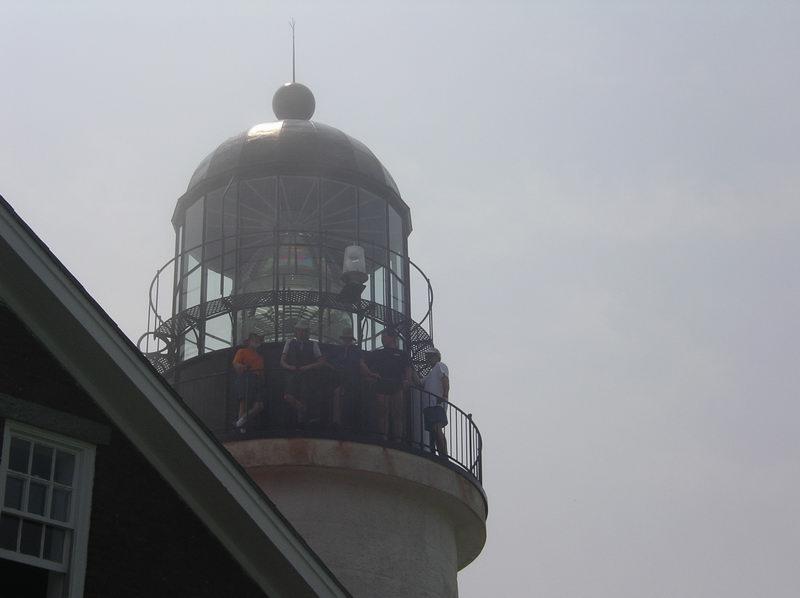 There is also a fog detector near the lighthouse. It shines a pulsing light out into the distance, and has a detector just underneath it. When the fog is so thick that the pulsing light is reflected back into the detector, the fog horn starts up.This was out of order when we were there, and the caretakers said the fog horn is going night and day whether there is fog or not. 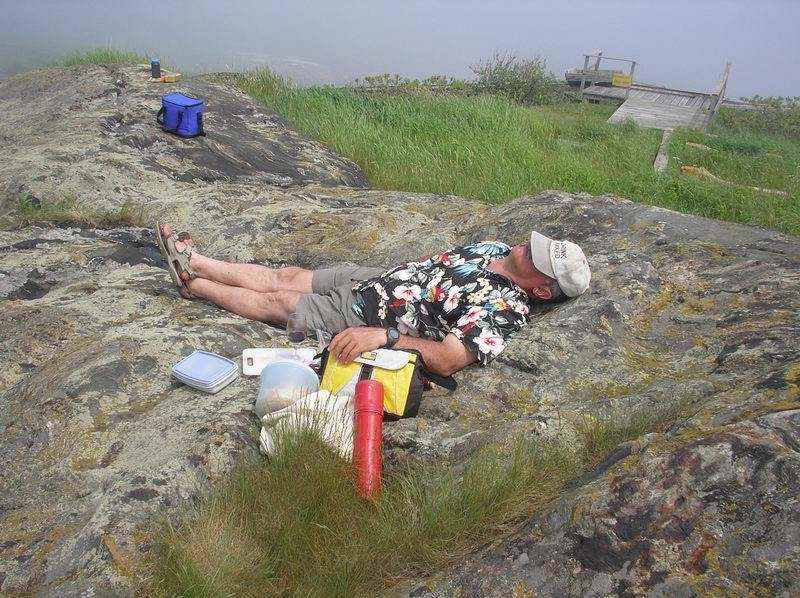 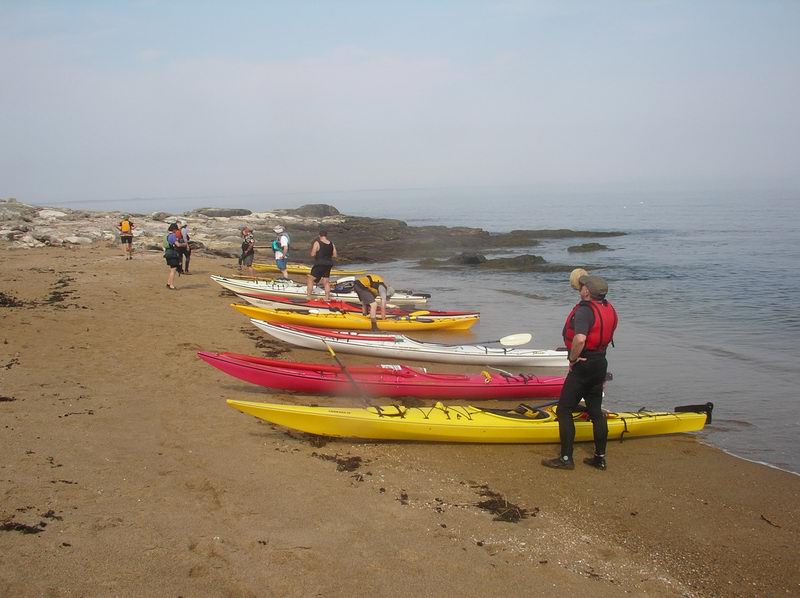 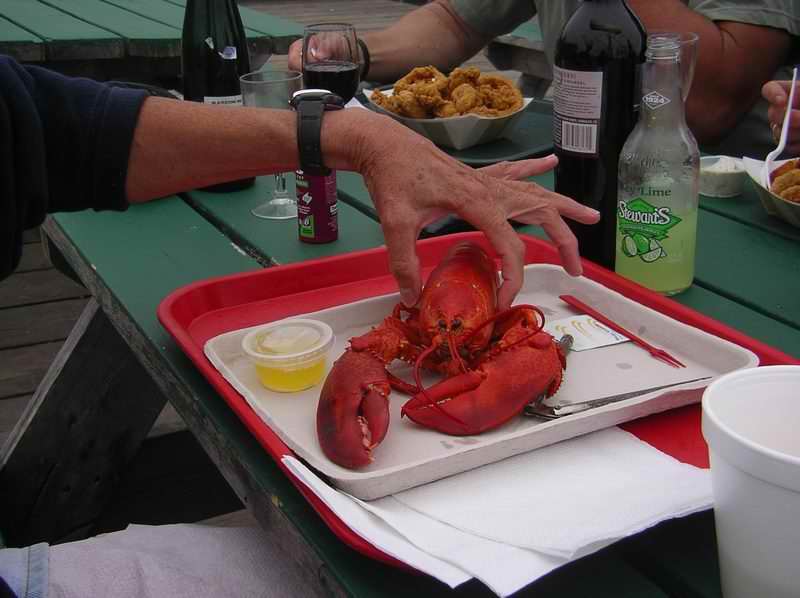 Our return trip was done in thick fog, with a little bit of playing around over reefs and in shore breaks. One small rocky outcrop had seals, and we also passed a family of Eider ducks - a mother and about 8 babies. At Five Rivers there is a Lobster Restaurant on the wharf, and five of us stayed on for a meal, and listen to our leader telling us about the nude beaches he came across when sea kayaking in Croatia.

It was a very pleasant trip with a good bunch, and Elli and I intend to get out with them again when we can.