Mitchell Tappan and his Grandma hit the water again in July, to try a slightly more ambitious trip this time - an overnight camping trip to the Gosling Islands in Casco Bay, Maine. Mitchell was paddling the Pachena again, and carrying all his own gear, including his own tent, sleeping bag, dry clothes and food and water.

We paddles 7.5 nautical miles the first day in calm conditions, and 8.5 the second day in windy conditions. This is compared to his first trip a few weeks ago in an empty kayak, when he paddled 5 nm. 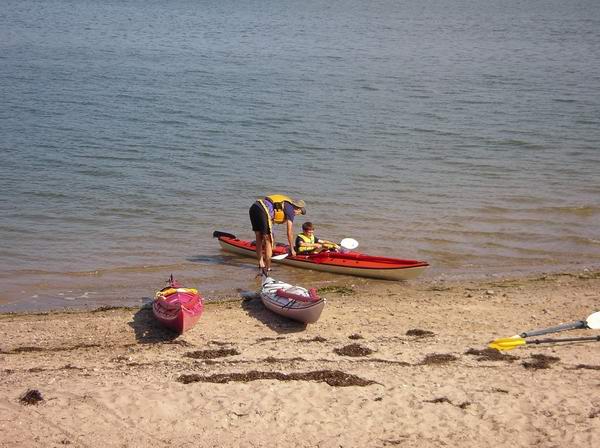 The start at Sandy Point on Cousins Island.

We started at Sandy Point on Cousins Island again, mainly because of the ease of parking and leaving the vehicle. We launched about half an hour after high water so were able to paddle in close to Cousins Island, north to Blaney Point. From this point you could see islands in every direction - all very confusing as it was fairly difficult at times to see which island was closer and which island was further away. We cruised across to Little Moshier Island and paddled up between it and Moshier Island. It looks as though you could walk between then at low tide, and right at the shallow part there was a family enjoying the quite nice little beach there. We went on the north end of Moshier Island and landed on a dock there for a few minutes to have a snack break.

Then it was just over a mile across to the north end of French Island where there was a double foldboat on shore, and 5 other sea kayaks paddling around the island. We continued on the next mile to the first of the two Goslings and found a very nice campsite right on the northern end - complete with table and a swing. It was slightly messy with paper under quite a few trees, and lots of aluminium cans in a fire place above the high water mark. We cleaned a lot of this up, and took the cans away with us in spare plastic bags when we left. It is unfortunate that we get these few thoughtless lazy people all over the world. 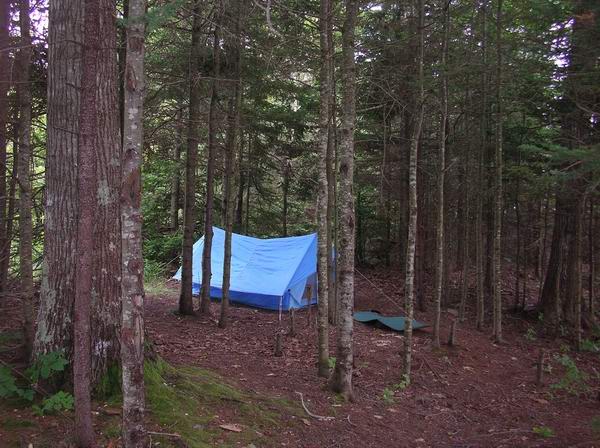 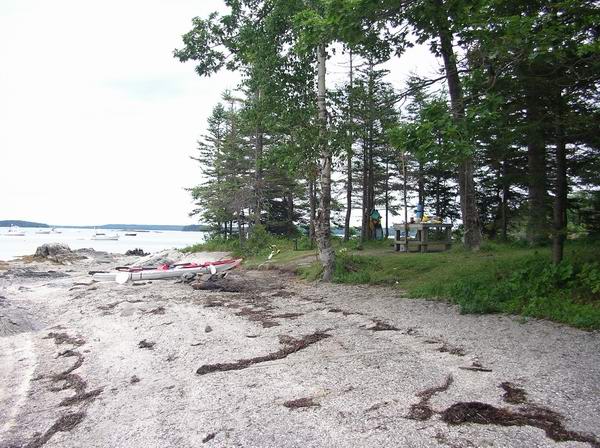 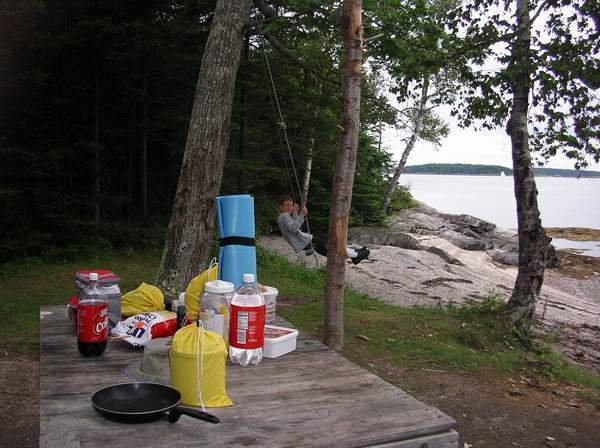 But it certainly didn't detract from the beauty of the place, and the owners are to be commended for making these two islands available to the general public. We set up our two tents, and then had a bit of a look round the island. There was quite a bit of activity on the other island as the tide receded, and it eventually receded so much that you could walk between the two of them. This was fun as we waded across the first part on to a small rocky section, and then had a good sandbar the rest of the way. One family on the rocky section was turning over big rocks and finding some largish crabs scuttling away underneath. People were certainly enjoying the very fine sunny conditions. 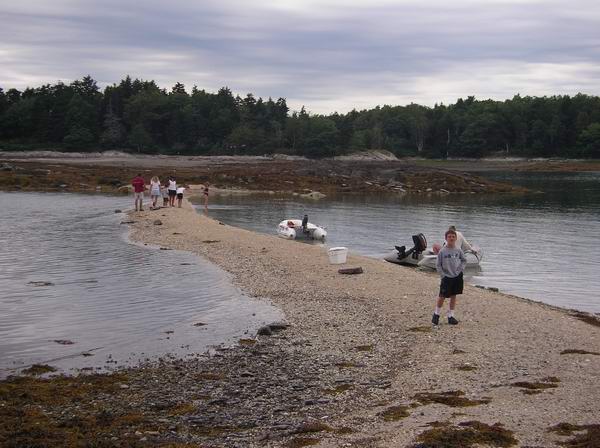 The sand bar joining the islands at low tide. 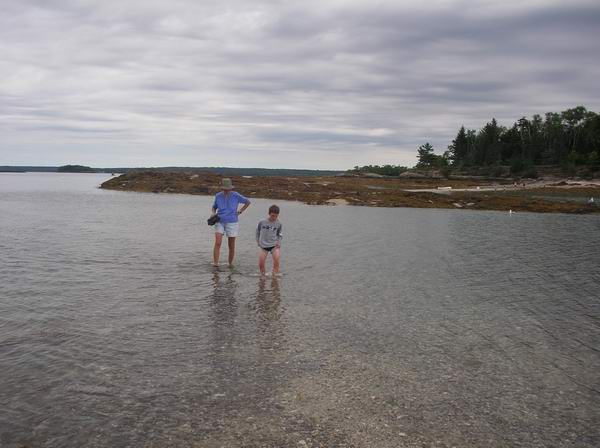 Wading the first small bit to the rocks before the sandbar. 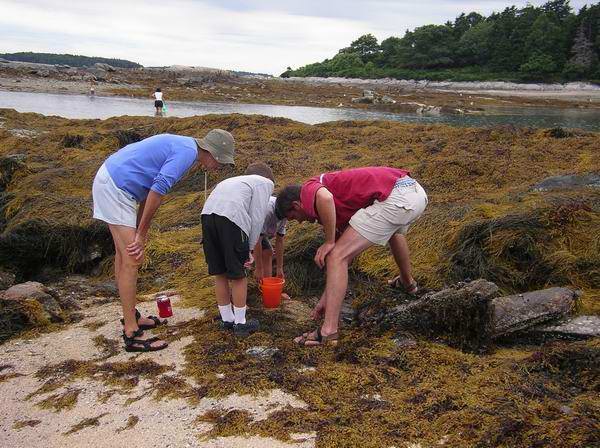 Looking for crabs under the rocks at low tide.

On our island there were some large gulls flying into the air with a mussel in their beak, and then dropping it onto the rocks to break it open. 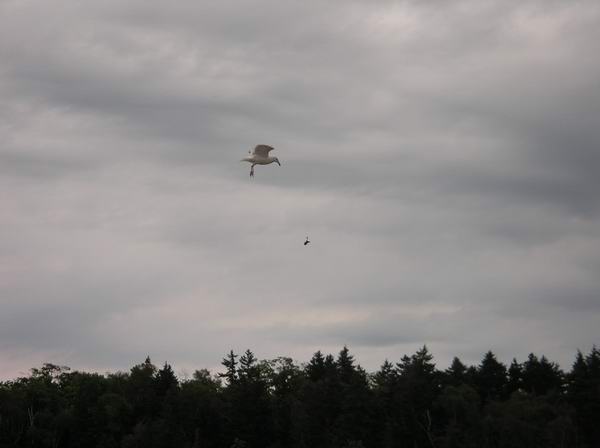 Gull dropping mussel to break it on the rocks below.

Later on in the afternoon when the tide had risen again we got back into our damp paddling gear and headed north to see if we could see any seals or Osprey. between the two Goose Islands. There were a few seals, but I think we were far too late in the season to find Osprey still nesting. Then we came back and circumnavigated the other Gosling, before going ashore at our camp again and preparing for the night.

Mitchell had a sail up for the first time ever as we came back between the two Goslings. 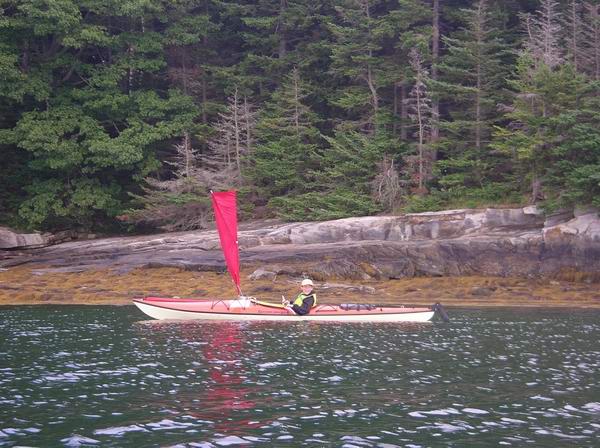 Mitchell's first experience with a sail.

You are requested to keep fires below the high water mark, but unfortunately it was high tide about 8.45pm so we ended up with a small camp fire in the fire place that was there just above the high water mark. A very peaceful spot to be in. 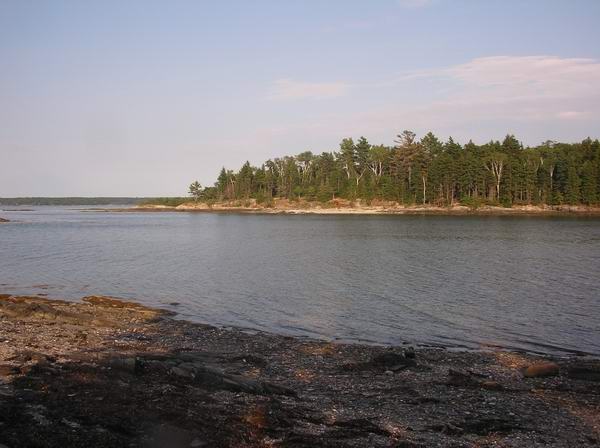 The view across to the other Gosling at high water - no sign of the sandbar where we walked. 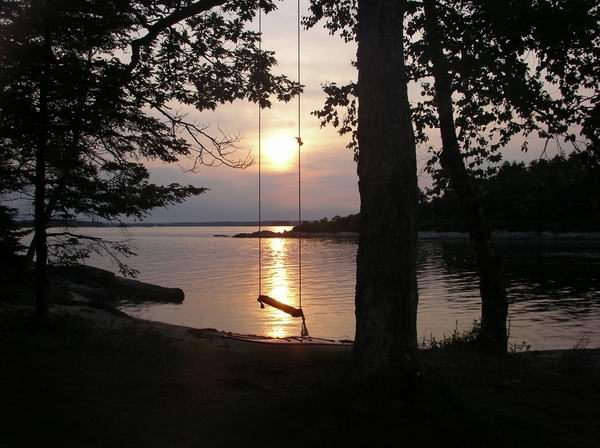 It rained during the night, and the early morning was wet and foggy. Nobody was in a hurry to get out of their tents, but I put a spare tent fly up over the table so we could breakfast in some comfort. 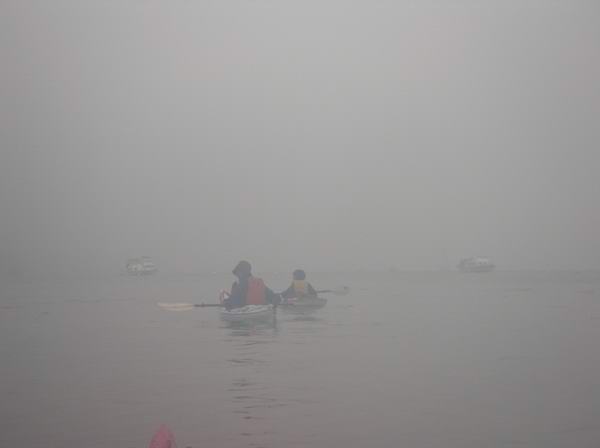 A foggy start to the day.

Then it was off into the fog, north to go between the two Gooses - planning to go across to Wolf Neck and back south along the shoreline. However the wind was quite fresh from the south and we decided not to do this, as there was no shelter from the wind that way. Instead, at Flying Point we headed into the wind out to Bustins Island where it was very sheltered as we paddled along its shoreline. 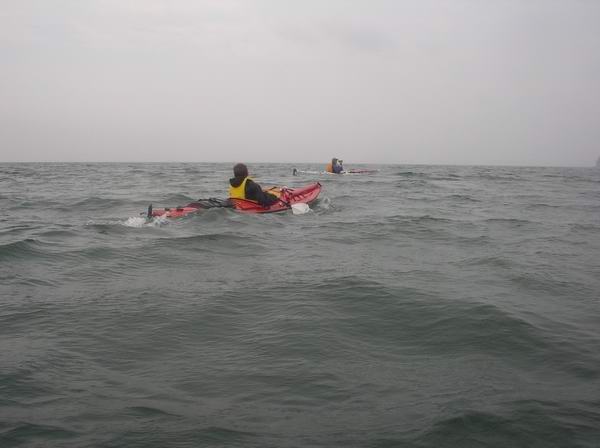 We rested in a small cove near the southern end before heading off across to Moshier Island, where we again found shelter, and stopped on the small beach on the north end of Little Moshier Island for a snack break. 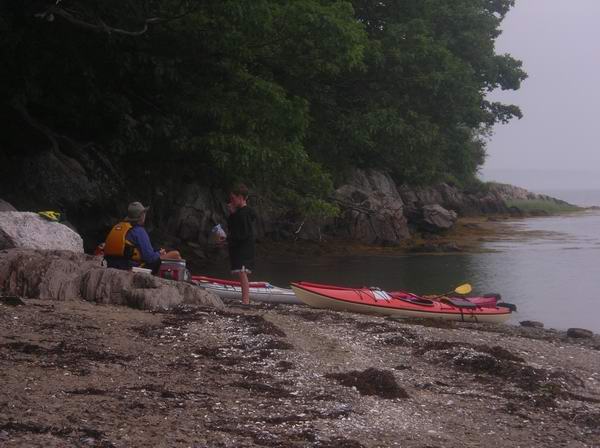 Then it was down the western side of Little Moshier and across to Cousins Island, where we continued under the bridge to see if we could see the seals we found there last trip. They were there, but not as playful this time, but we had a good short sail back to Sandy Point where we landed and unpacked all the gear out of the kayaks.