This was listed as a trip with the Southern Maine Sea Kayak Network, with the information as follows:
"Launch from North Bath Boat Launch; ride the ebbing tide down to Fort Popham. We can also check out Fort Baldwin, eat lunch, and wait for the tide to turn. Low tide at Fort Popham is 1127, but slack water isn't until about 1400. After the flood gets running good about 1500 we'll ride the flood back to Bath. Total distance about 24 nautical miles, but with the tide it will be equivalent to paddling about 15 nm. After the paddle we can have dinner at Beal Street Barbeque in Bath.
High tide: Bath >0604
Low tide: Bath >1248
Low tide: Popham >1127
High tide: Bath >1844
High tide: Popham >1751"

Although not a sea trip, Elli and I needed some exercise in preparation for some sea trips later on in the summer - so we booked in for this one. But the forecast for the Saturday was for 100% rain, and the trip was cancelled on Friday. We needed the exercise so decided to go any way.

Bob Arledge was our leader
For the trip down to the fort
“They can start without me”
When he saw the weather report.

But Laurie Ford and Elli
The paddlers from downunder
Thought they’d go and see the sights
They don’t mind a spot of thunder.

So down the Kennebec they went
Carried on the tide
And soon arrived down at the fort
It was a pleasant ride.

There was a little bit of wind
And a spot of rain
But not enough to daunt that pair
They’d probably go again.

Whenever I introduce a new paddler to sea kayaking I always tell them that it is a cold hard wet sport - and so this trip down and back the Kennebec River was.

We arrived at the boat ramp about 0915 after a 2 hour drive, and of course we were the only vehicle there, as it still was at the end of the trip. It wasn't actually raining at the time - more an occasional light drizzle - as we loaded dry clothes and food into the kayaks.

The Kennebec River is about an average of a 1/3 of a mile (600 metres?) wide, a bit more in places, less in others. The river can look a mile wide in places due to low marshy ground that dries out at low water. Bath is about 12 miles from the sea, and is famous for its big ship building industry. Fort Popham down at the mouth was built to keep the Confederates from raiding the ship building yards. There is about a 4 foot (1 metre) rise and fall of tide. In the basically narrow river this leads to some pretty fast currents.

There was a naval vessel (destroyer?) alongside the wharves looking like it was in for a refit, and buoys were anchored 400 ft out from it as a no go zone, and constantly patrolled by a small security launch. I didn't dare take a photo in case I was arrested for spying. We paddled along close to the shoreline most of the time, but now and then rounded a small point and found a big back eddy flowing in the opposite direction. This meant going out towards the middle a bit to get out of it, then gradually coming back inshore again. We saw dozens of Ospreys, and spotted a Whitetail deer on one small island near Back River. Speaking of Back River, we had discussed the possibility of paddling down this as an alternative to the Kennebec. The Back River is a tiny narrow shallow river which joins the Kennebec about hafway down, and can be accessed from Bath by paddling down the Sasanoa River - this area is like a huge delta. However we figured you needed to be at the top end of the Back River right smack on high water or there wouldn't be enough water to float even a kayak. We kept it in mind in case we were late coming back up from Fort Popham.

The rain came and went in bursts, as did the wind. For a few minutes we would have a good gust from behind and put the sails up, then within a few minutes there would be none, or it would be a headwind. Further down the river we sailed in behind Lee Island with a good burst of wind, and 3/4 of a mile later came back out into the river again. Squirrel Point had a lighthouse with red glass, and also a fog detector. This is the same as we saw on Seguin Island last year, a strobe light that flashes straight out from the building, and a detector right above it that will detect any light reflecting from the fog. 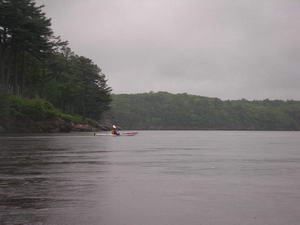 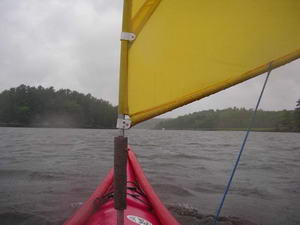 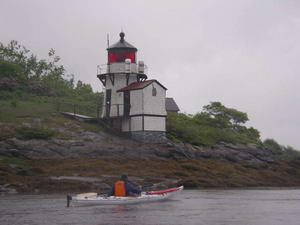 On the Kennebec River.

The last mile from near Cox Head to the fort was a good strong wind from behind, and we raced down this last stretch under sail - pulling into some docks right at the fort. We figured there weren't going to be too many other craft wanting to use the docks today - we had only seen two other boats on the river (keen fishermen) - so tied up to the docks to go and check out the fort. There was one car in the carpark here - not the greatest day for tourists. It was now quite windy and cold and showery. 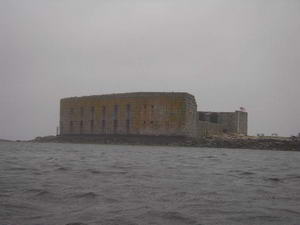 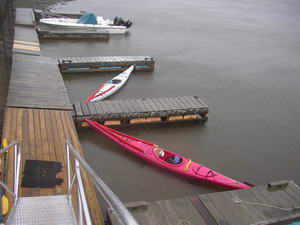 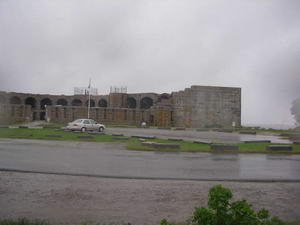 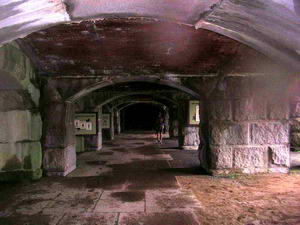 Now we had to make a decision about changing into dry clothes and waiting for 1500 before paddling back up the river, or just having a quick look at the fort and start the return trip straight away.Although we could have easily changed under the fort area, it was windswept and damp - it just wasn't the day for hanging around - even in dry warm clothes. So we spent ten or fifteen minutes wandering around the site before getting back into the kayaks. Sitting in the kayaks was considerably warmer than standing on the shore, and we were soon paddling across to the eastern side of the river (12.30pm). We had seen the odd seal or two on the way down, but across here there were dozens of them popping their heads up to watch as we were swept sideways by the tide. We crossed the river partly to get close to shore out of the tide, and partly to get out of the strongish easterly wind that was now blowing. We hadn't stopped for lunch, but had some chocolate, and continued up the river within a yard or two of the bank. This was quite pleasant, just cruising along out of the wind and tide - and the rain had abated for a while. Because of the delta like nature of the river there were many islands along both sides of the river, and going across from one to the next one we would momentarily be back in the wind again, then into calm water almost immediately at the next island.

Just past the mouth of Back River we were paddling alongside a very shallow area which must have had a big school of very small fish, because there was a big flock of terns just continually falling out of the sky into the water - making a feast of the fish that could not escape into deep water.

About 4 miles short of Bath we poked in behind Bluff Head where there was a very convenient dock to use for a lunch stop (3.30pm). 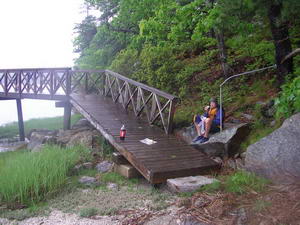 We were back in the carpark and loaded up and heading for home at 5.00pm. A worthwhile trip.
Laurie Ford