Last year we were asked by Laurie’s sister Pauline if we would take Laurie's great-niece and great-nephew out sea kayaking so that they could experience something new. Their grandparents have taken these cousins on various adventuresome trips and excursions but this was one they wouldn't be able to handle. So we said yes, and that we would take them to Maria Island because we feel that only by going off shore to an island does one become completely aware of the power of the sea, the forecasts, one's skills, and the need to plan and pack carefully. Not everyone has several spare sea kayaks so we had to use some "not so new ones".

The grand parents and teenagers arrived at our house to stay on the 1st February with the trip planned for the 3rd. On the 2nd we took them to the nearby flat water Carlton River to get a feel for sitting in the boats and learn some paddling and use of the sails. We paddled and/or sailed up to the bridge and back. They weren't happy with the experience, having the start of some blisters, and sore backs.

Then first Laurie, then the grand parents and Rachel all got violently ill – vomiting and diarrhea. This lasted 24 hours in most cases, but longer in others. So on the 4th we loaded three boats on the car and put in at the Domain in Hobart and paddled along to the wharves, docks and boats of the harbour. Daniel enjoyed passing under piers, alongside yachts, and playing a continuous game of tennis ball catch from boat to boat. Backing up and stroking sideways to retrieve the ball were good learning tools. He managed to keep the ball on his spray skirt all the way back through good-sized waves to the landing ramp. We went into the Hobart shops and bought gloves for Rachel and Daniel. 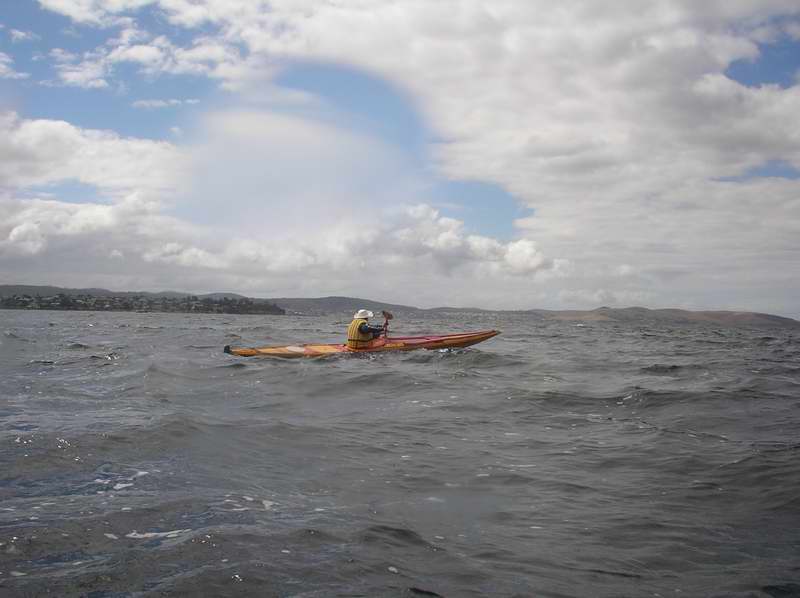 Daniel heading for the wharf area. 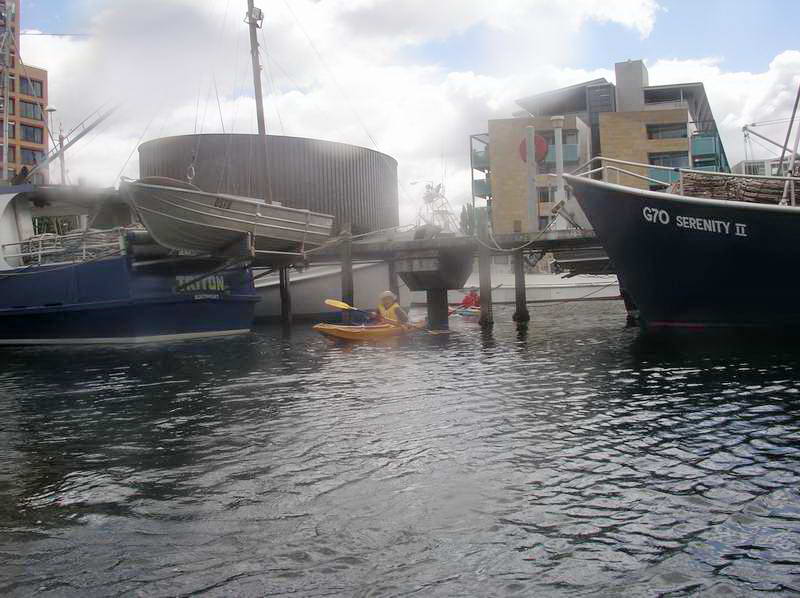 On Sunday, the 5th, all were well and we launched from Earlham Estate in the morning to make the 6k crossing to the first point of land – Point Lesueur. A very mild SE breeze (although heading us) made nice conditions and we landed for a rest on a pebbly beach at the point after one hour fifteen minutes paddling, having been swept to the north by a strong current. The kids had done well. 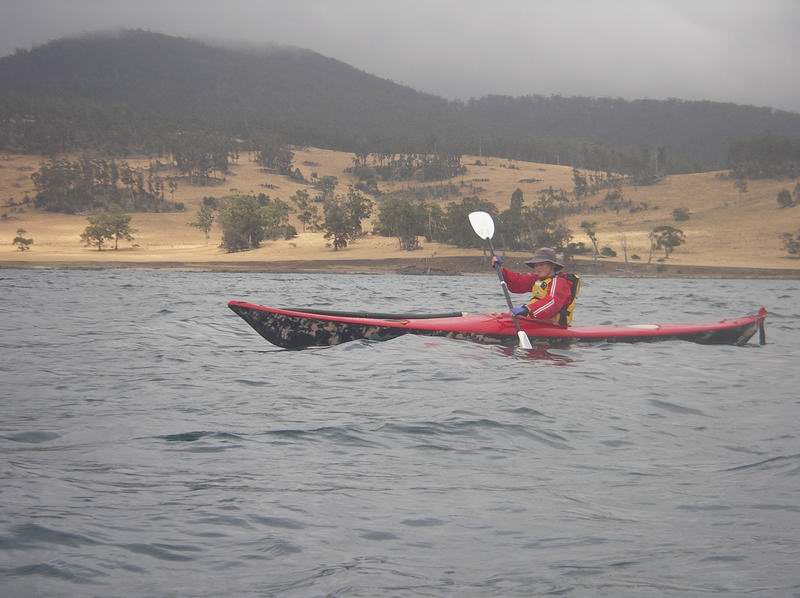 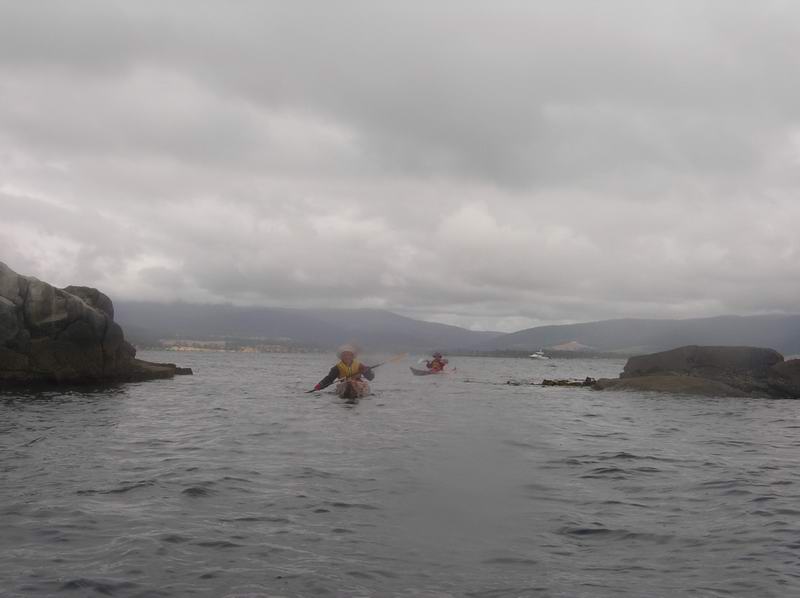 We continued on, playing through rocks, and landing at Encampment Cove in gorgeous Chinaman's Bay.  The wind was stronger now and we set up camp in the more sheltered top clearing of the camping area. The kids chose the hut for their headquarters. Dry clothes and then a stroll to show them the convict cells, and an old jetty, and the view back across Mercury Passage. We had a good campfire and played cards late into the evening. 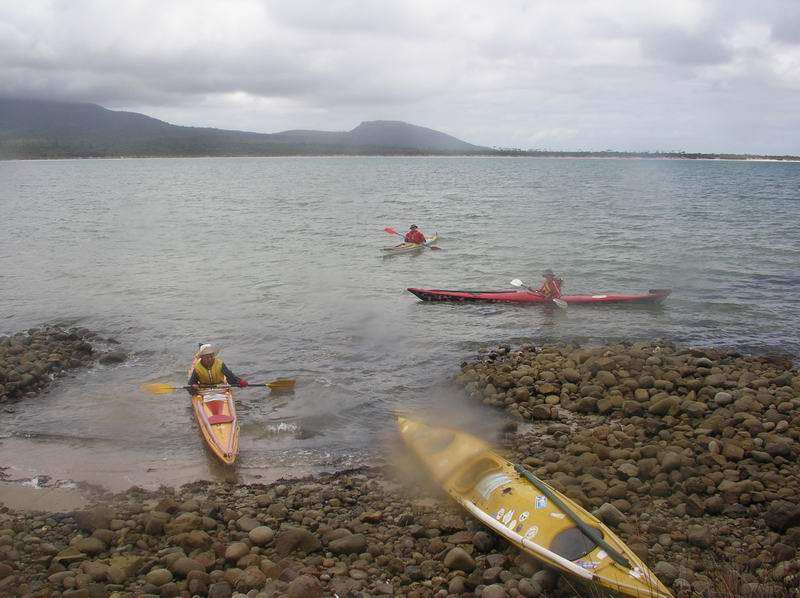 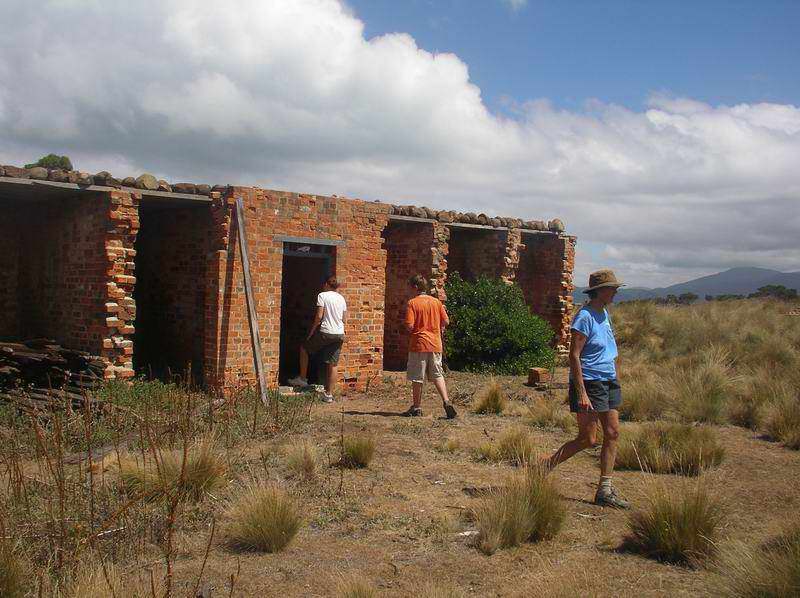 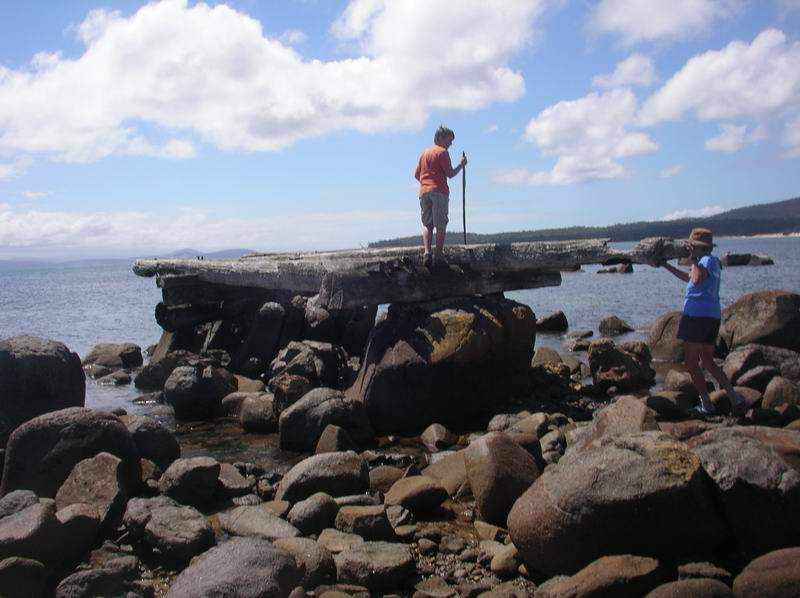 Foreshore near the cells - old jetty. 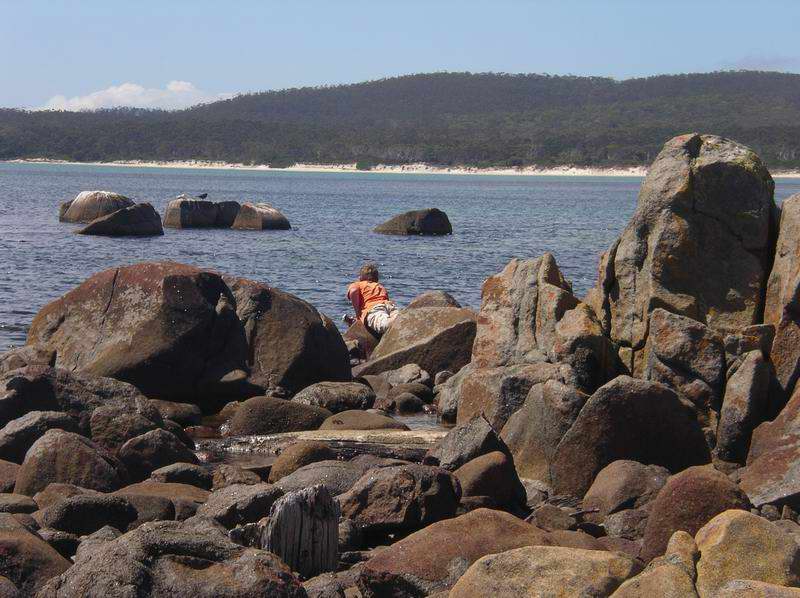 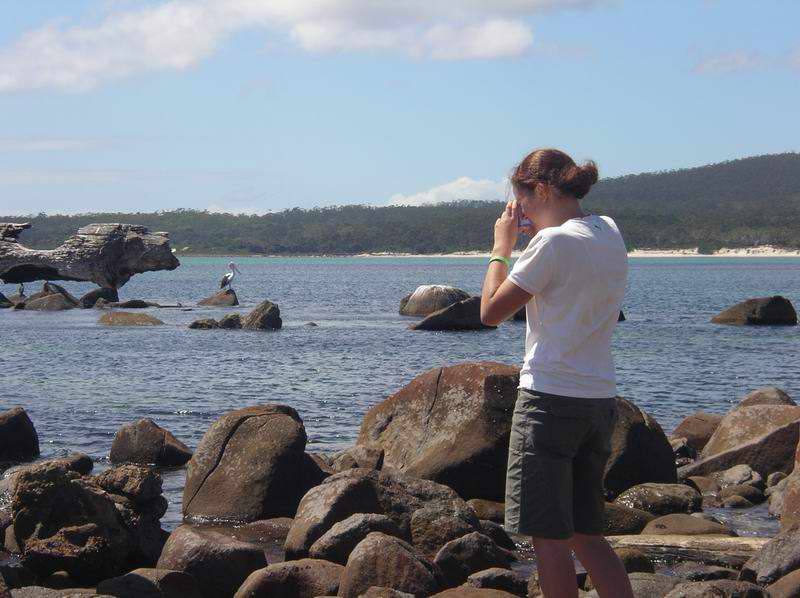 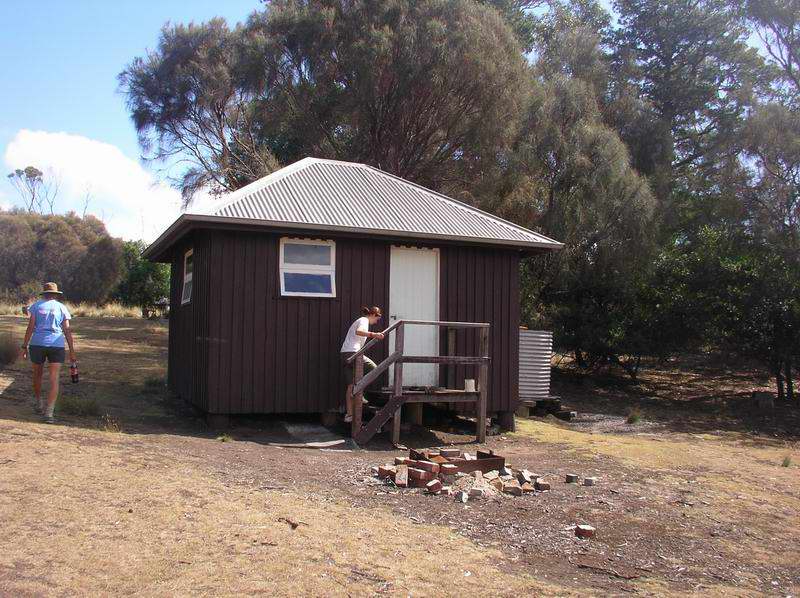 Hut for campers to use. 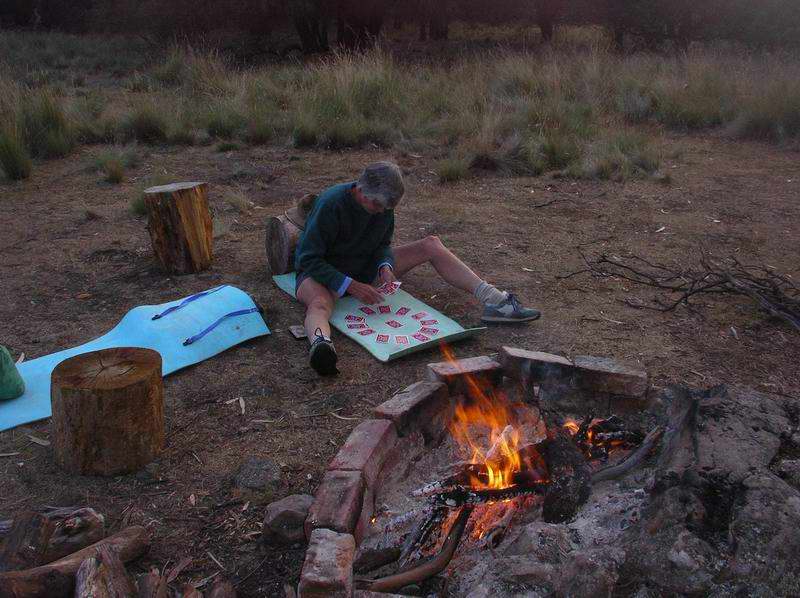 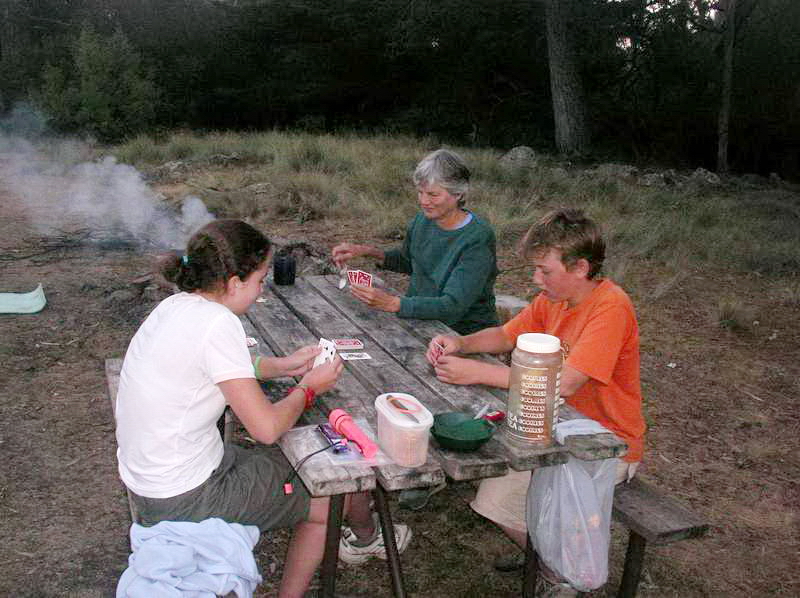 They decided that they would like to climb Mt Maria the next day and studied the map to find the distance and route. It looked like about 24km return. Next morning was bright and clear, and even Rachel was out of bed by 0615. We started walking about 0700. Despite being tired they turned into speedy mountain goats (“rock wallabies” said Daniel) when they got to the bouldery rock slide area near the top. The incredible view was worth every step. 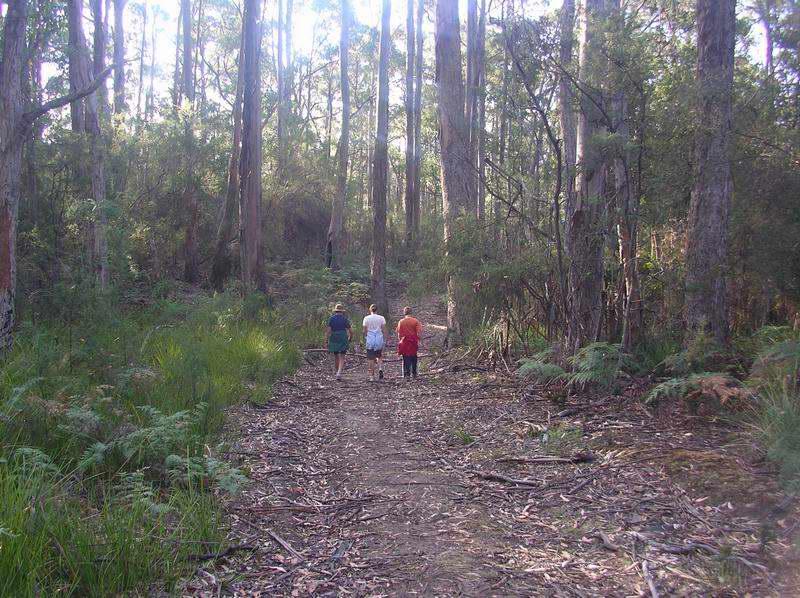 Heading north along the inland track. 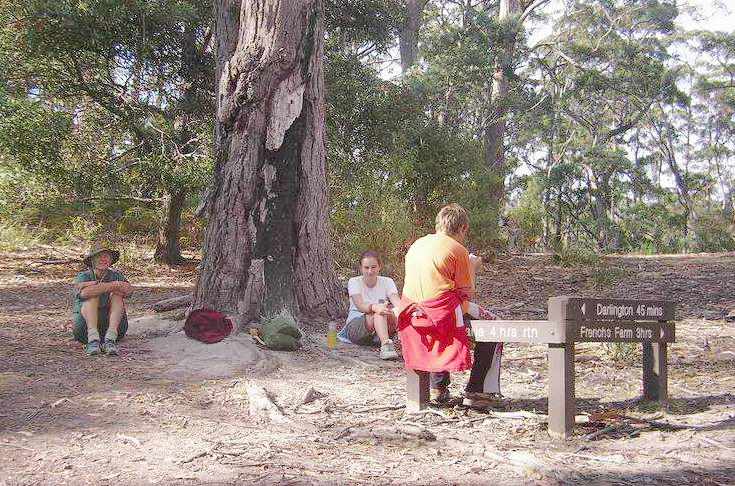 The track to the summit - 4 hrs return. 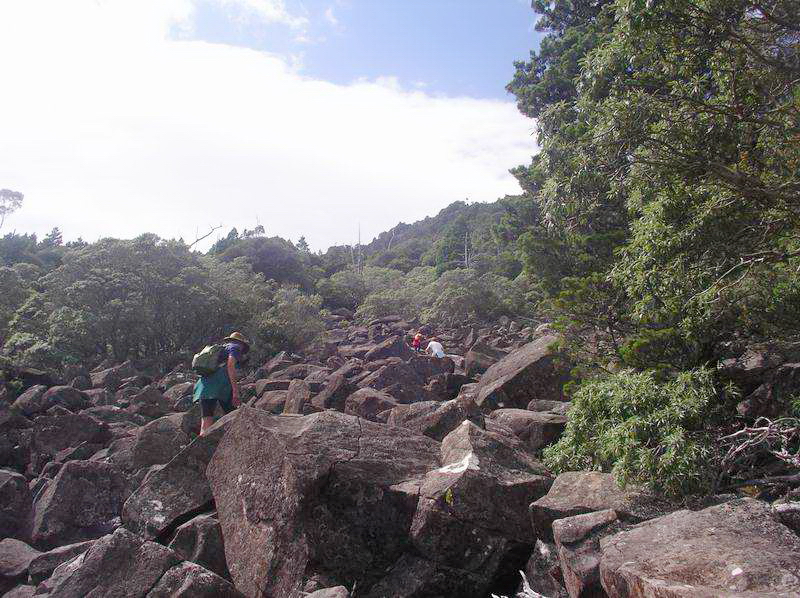 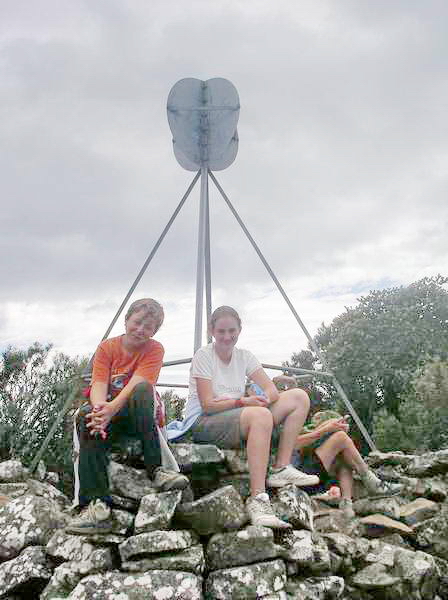 View from the top. (The campsite is out on the small peninsula to the right)

The forecast gale roared through the trees above us on the way down the mountain. We were even concerned about falling branches. This was the day when it snowed on Mt Wellington. 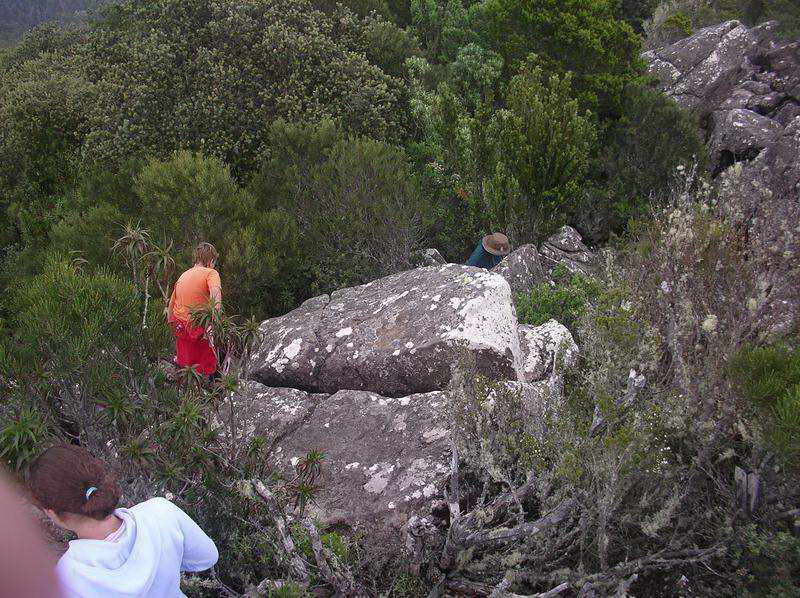 Once back we remeasured the route on the map with a shoelace and decided it was more like 28kms. All of us lay down and had a short sleep during the remainder of the afternoon. Tired but happy we barely made it to dusk before crawling to bed. We talked about the poor prospects of paddling back across the next day. 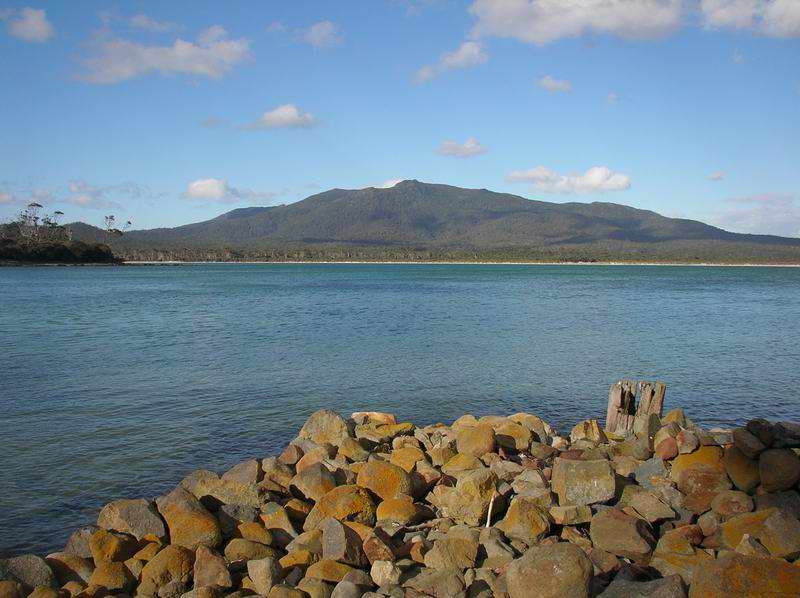 Mt Maria from the campsite.

The forecast for the 7th was continuing strong SW winds, possibly diminishing in the afternoon, with the remote chance of a sea breeze. The day was not hot enough to produce a sea breeze. Laurie decided that we would be packed up and ready to give it a try at 2:00 so we lazed around in the morning and walked over to the cells again to check on conditions in the Passage. Blowy!

Once on the water we faced the wind coming into the Bay. The waves were not difficult and the kids were balancing well in them. The wind had moderated considerably since the morning. We headed to the yellow marine-reserve marker buoy and then continued on across the Passage without stopping. Occasional wind gusts were strong in our faces. By now Rachel had developed a nice steady stylish stroke. The whole crossing took two hours but she said it seemed shorter than going over. 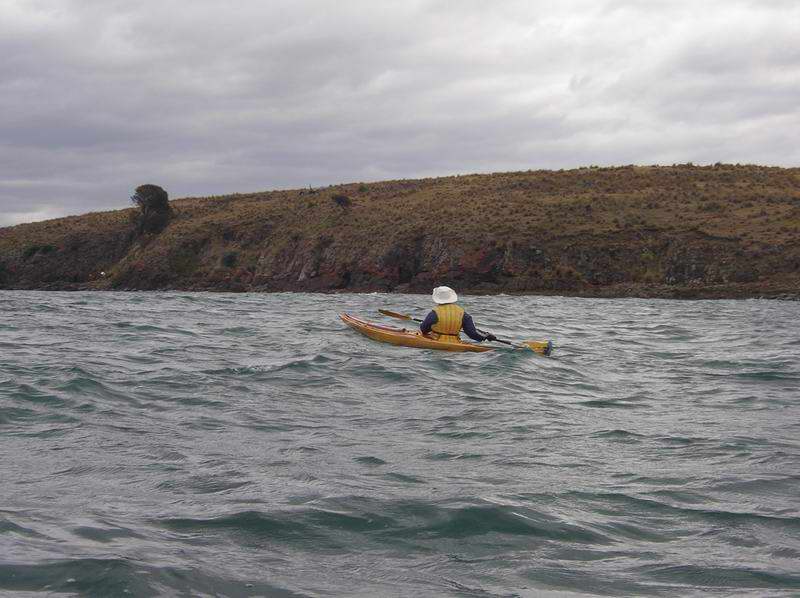 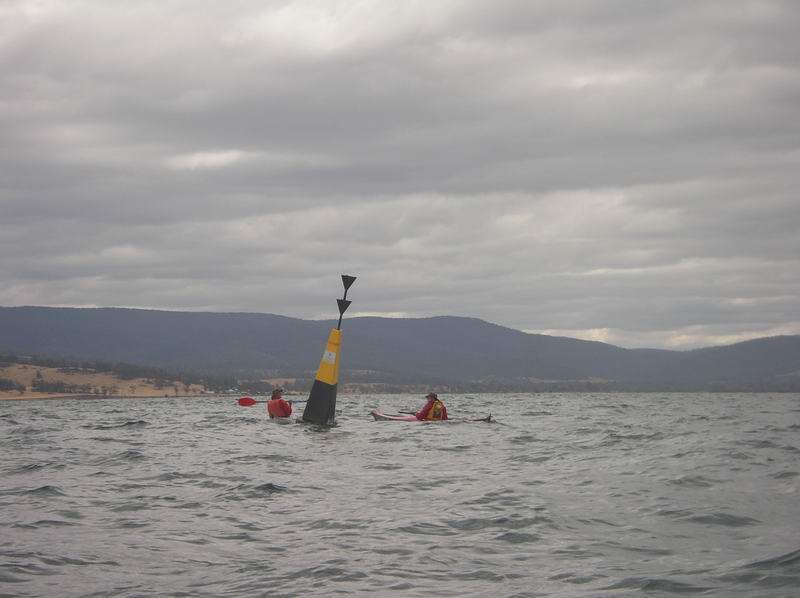 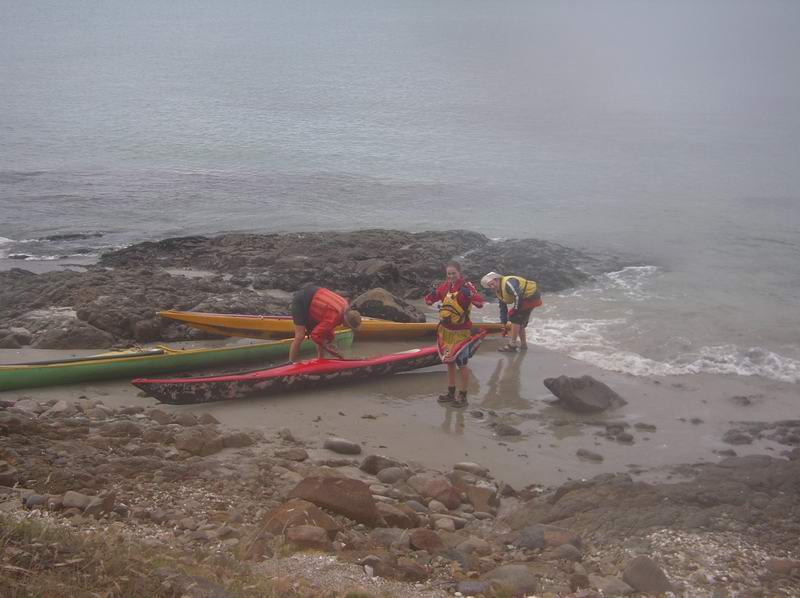 There is nothing as draining as anxiety and they must have been pretty anxious as they headed out to sea on the way to the island the first day. By the trip back they had conquered a long hike and a mountain and already crossed the water once. They had confidence.

We told them they might have been some of the youngest people to paddle single sea kayaks over to Maria Island and return. They were glad to be back to shore. They had certainly  “experienced something new”.