What an adventure in so many ways, with a rag-tag crew of Expat Tassie’s, one proper Tassie, and a Qlder.

Duration was dictated by ferry booking times and obviously weather too, but mechanical issues can also play a part in these things.

It all began with me (from Emu Park, 20km from Yeppoon, Q) picking Toby up from Ballina (northern NSW) and enjoying a leisurely cruise  to Melbourne town and so onto the Spirit of Tasmania ferry for a daytime crossing, which I wouldn’t do again as it means early start and late finish at the Tas end. Smarter to sail by night, leaving the days for finding your way around.

After a day with Laurie, at his fascinating off-grid home, Toby, Laurie and I went down to Kerry and Roger’s “shack” at Cockle Creek, where we settled in till they arrived a couple of days later. 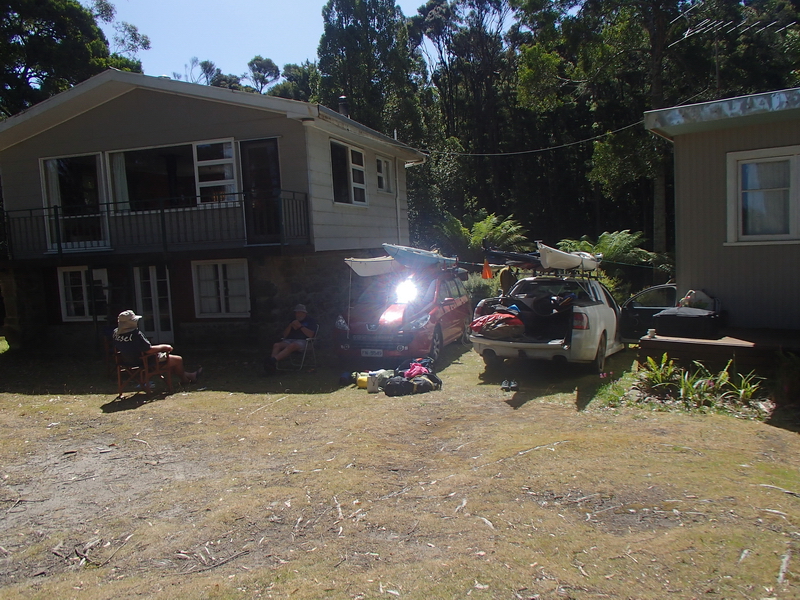 Next we’re off to Strahan, via Huonville for last minute stock up of necessities, which were depleted on our layover days.

All going well till Derwent Bridge where Laurie’s snobby little Euro vehicle decided “no more”. Bugger, but after a quick shuffle we ended up with three paddlers and three kayaks at Strahan, unfortunately minus Laurie who was obliged to accompany the sick vehicle to hospital (who couldn't revive it)!

Day 1. The actual adventure begins on the 18th with some serious wind on the harbour, so we elected to put the kayaks on the Harbour Master tour boat which dropped us at Heritage Landing, well up the Gordon River and out of sight of any real wind.

Captain and crew were vey helpful describing suitable, legal, campsites within reach, but after a quick vote, we set up camp on the raised walkway (very raised). 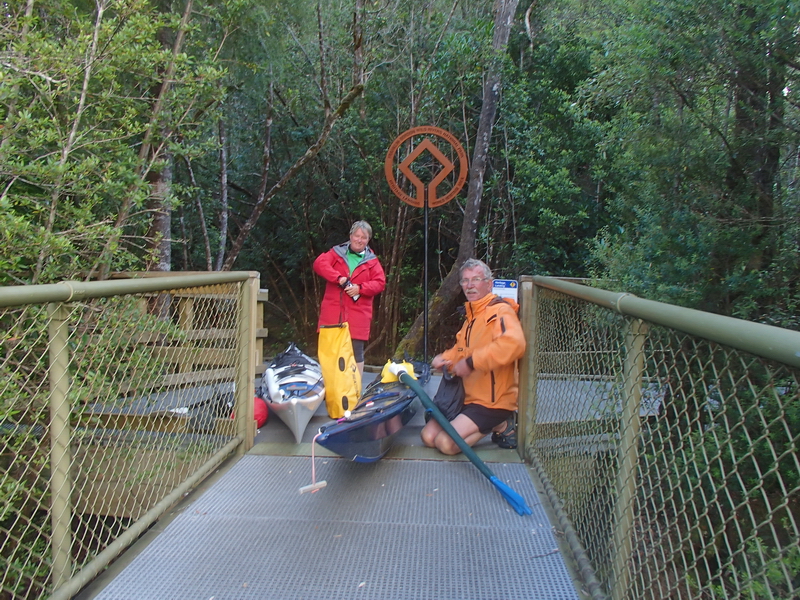 Day 2. Early start as we had no idea when another tour boat could arrive, but we were 3m above the water!!

May have been a compulsory seal launch if Laurie was with us, but we sooks carefully lowered the boats to a pontoon and reloaded them, then off at last!

We carried detailed maps, plus we had Toby who had been here before…Way before, maybe 30 years before?? So a bit of flying blind involved for the whole trip, but that’s what makes life interesting?

Thinking about 18k till we came across the best ever camp site with a beautiful sandy beach and protected camp sites from pretty much any direction, and only one snake. 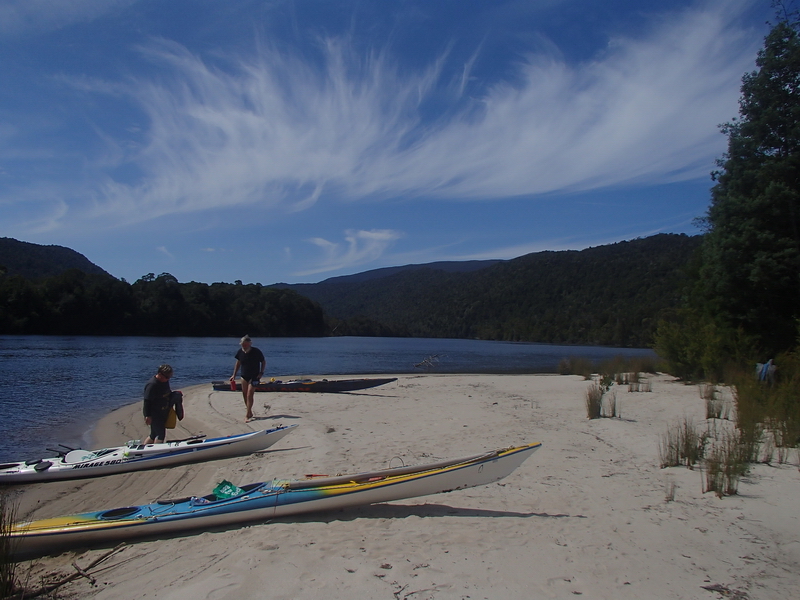 Day3. The plan was to go up river to Franklin falls and camp in the hut there, or return , so we loaded the boats and paddled through amazing scenery, with not a soul in site, about 8klm to find the hut in a state of disrepair, perhaps undergoing some needed maintenance. The walkways were also in a sad state, with sections completely collapsed. It would be a great spot to camp when it’s open and there is the pontoon for flying boats, which apparently no longer visit due to lack of demand. Chatted with two white water paddlers who had just come down the Franklin/Gordon rivers. 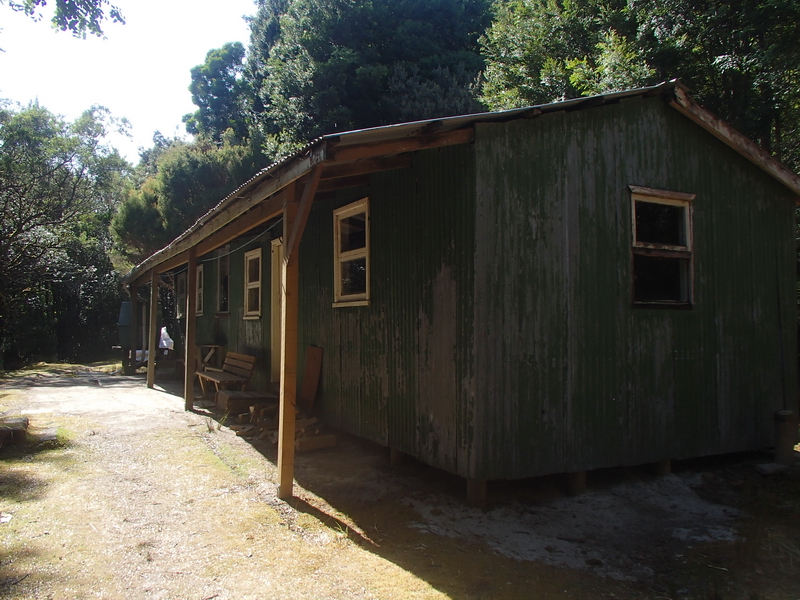 Arrived back at last nights camp to find it still vacant so settled in again and had an interesting visit by “Stormchaser”, a steel ketch with captain Trevor hosting a family group for an overnight trip to the falls. The sandy banks here and most of the river are so steep “Stormchaser” was able to nose onto the beach so all on board could climb down onto the beach to stretch their legs and chat a while.

Day4. Heading back down the river, we came across a group of walkers on a paddle trip, who had found a great site, partly obscured by a wayward log, but a spacious site with protection from all weather. These folks gave directions to another camp a little past Heritage Landing, which they did say was hard to spot, and they were right! After drifting through gaps in the reeds looking for it, we headed about 15klm further and camped the night near Gordon Pt instead. 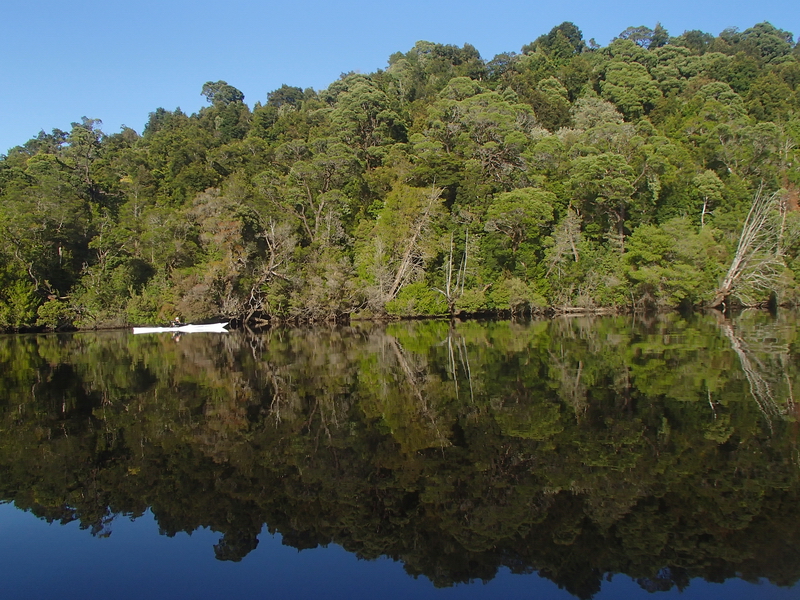 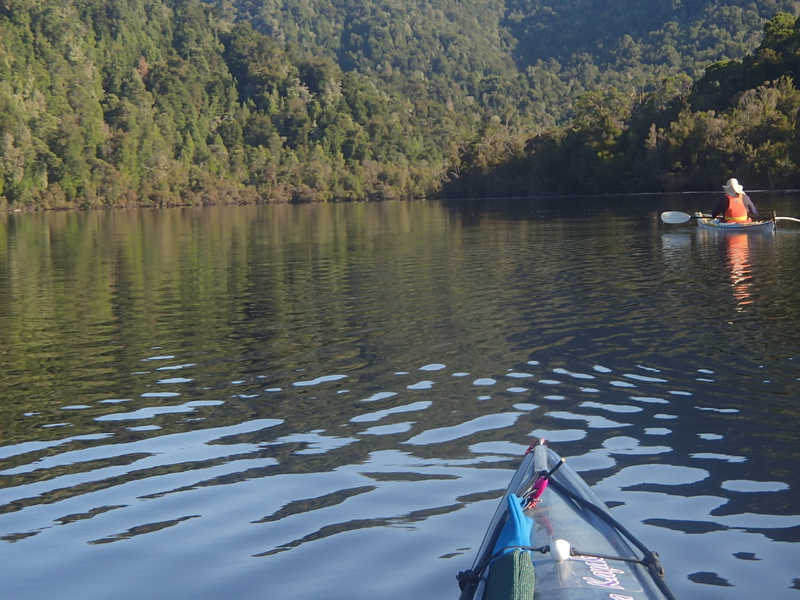 Day5. Soon after starting off in Birch’s Inlet, we came across a good hut on Henrietta Crk and decided to make use of that. After unloading, Kerry and I decided to venture up the inlet while Toby enjoyed a relaxing day with his book. Well up Birch’s River (15klm) we came across two yachties who directed us to another hut, which was so well hidden and seemed to have three separate boardwalks from different directions. Again the banks are so steep that both of us went under the boats on the slippery bottom, so it was seal-launch to get away.

Back to the hut and everyone decided to camp inside, in luxury. It’s really well cared for by a local group and the log book shows all the maintenance, plus visitors, and there have been lots of those/us

Kerry was already gone when Toby and I woke, which is not at all the norm, so a quick search found her sleeping peacefully on the verandah. She gave a great imitation of Toby’s snoring, breathing both in and out!! 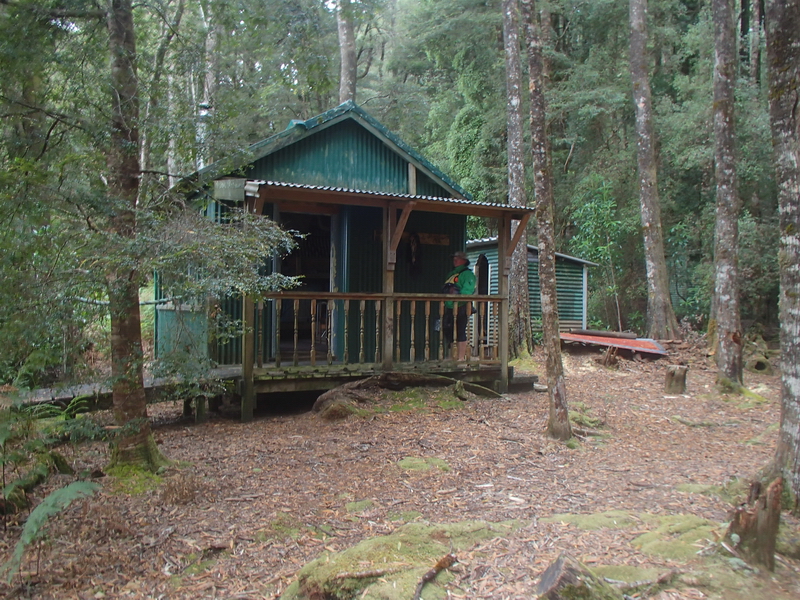 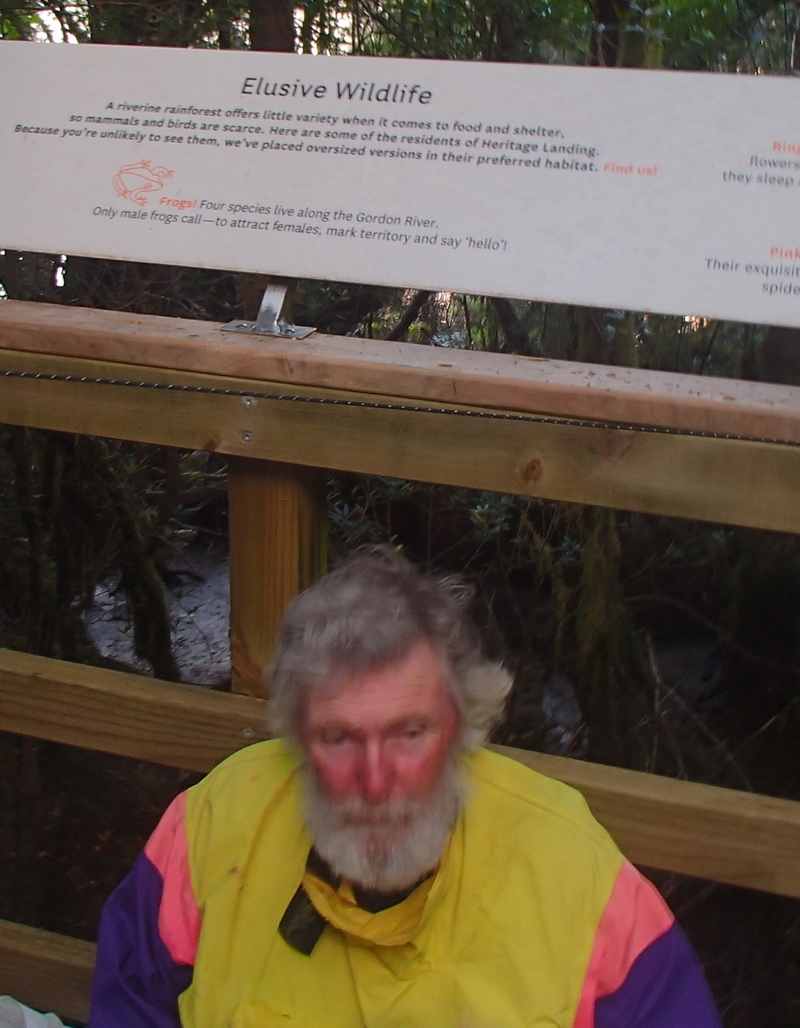 Day 6. On the way home now! Plans were flexible and we bypassed Steadman Pt and carried on to Liberty Pt, where the breeze was building and may have sailed us to Cat Island, within easy reach of Strahan the next day, but the decision was made to carry on to Betsy Bay, with the last bit pushing into a building breeze, but made the camp site after about a 20klm day. The campsite here is a mess with rubbish and junk left everywhere, maybe because it’s so close to Strahan

Wind supposed to be building tomorrow, so earlier start planned

Day 7. Packed and on the water by 5.00 on beautiful calm water and a spectacular sunrise over the harbor. Easy going to Yellow Bluff, with the experienced Toby chortling that the BOM got it all wrong.

The last of his words were whipped away as the wind kicked in, and stayed in for the full distance, making a hard slog and 4hrs to cover about 15klm.

It’s worth noting that Kerry paddled with no skirt and one knee bent to relieve severe sciatic pain. A great effort, but proved to be the seat position!

It is a shame that Laurie wasn’t able to make the trip, and also that it had to shortened because of looming weather, but a terrific place to paddle and good company, so I’ll definitely be back 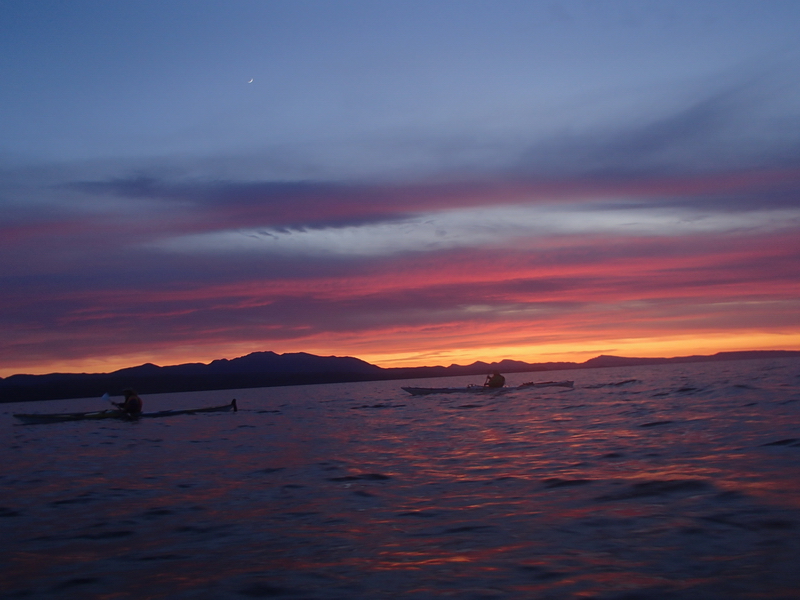