Mitchell Tappan is a small 9 1/2 year old boy, and Elli's dearest grandson. Elli had been talking about getting him out sea kayaking, and we had a (sometimes heated) discussion on the best way of doing this. I've always said that if people want to learn sea kayaking, get them out on the sea straight away. Elli's thoughts were that much more time should be spent building up skills on the very sheltered small lake where they live.

So we picked out Sturdivant Island in Casco Bay as a likely destination for his first experience, thinking we could launch from nearby Falmouth Foreside. That was a joke, when we got there we found they wanted $10 per kayak, just to launch from the boatramp. But the harbour master did tell us about a free launchsite a few miles away on Cousins Island, at Sandy Point. This was ideal, and as we were getting ready to launch another sea kayaker landed, and told us about the seals on the rocks just past the bridge.

Elli and I were paddling our plastic Storms, and Elli had purchased a second-hand Pachena for Mitchell to use. This was a very light fibreglass boat, which we had fitted a sail to - as Elli intended to use it herself as well. 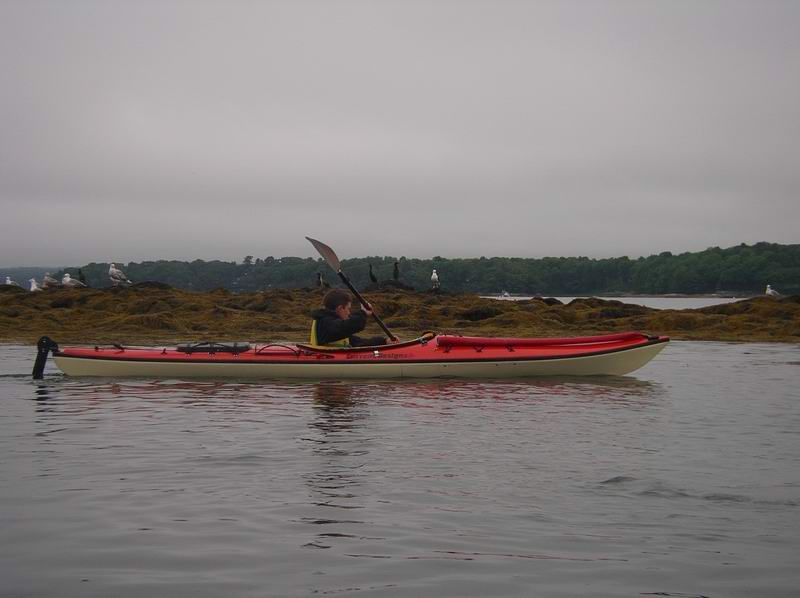 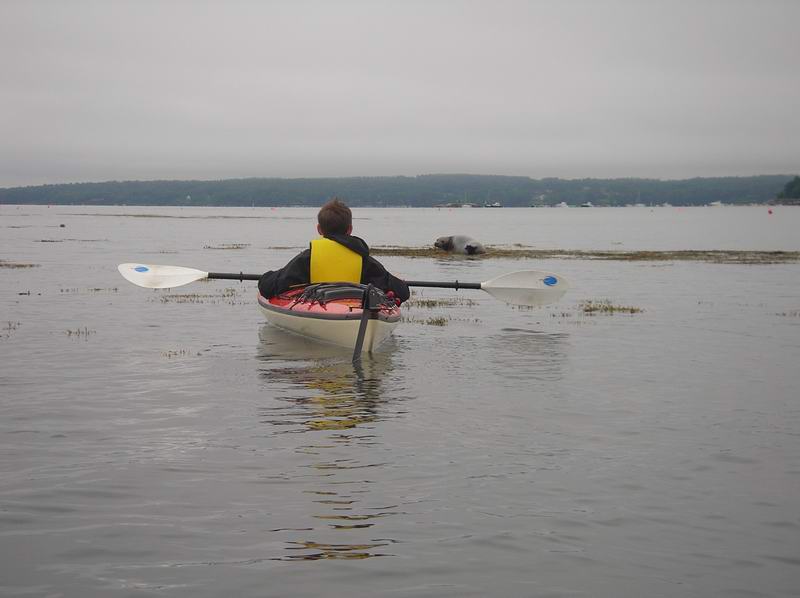 The day was very heavily overcast, and there was fog out to sea - half the time Sturdivant Island was obscured in the fog. It was about half tide, and ebbing, as we paddled under the bridge and out to the rocks in the centre of the channel. Most of the rocks were still under water, but there were plenty of sea birds on the rocks that were showing. A few seals were swimming in the vicinity. So after a short stay near here, we went on along the coast of Cousins Island towards a tall chimney stack. This is for a power station, and the tallest stack for miles away. We had seen this for most of our trip out to Jewell Island recently. 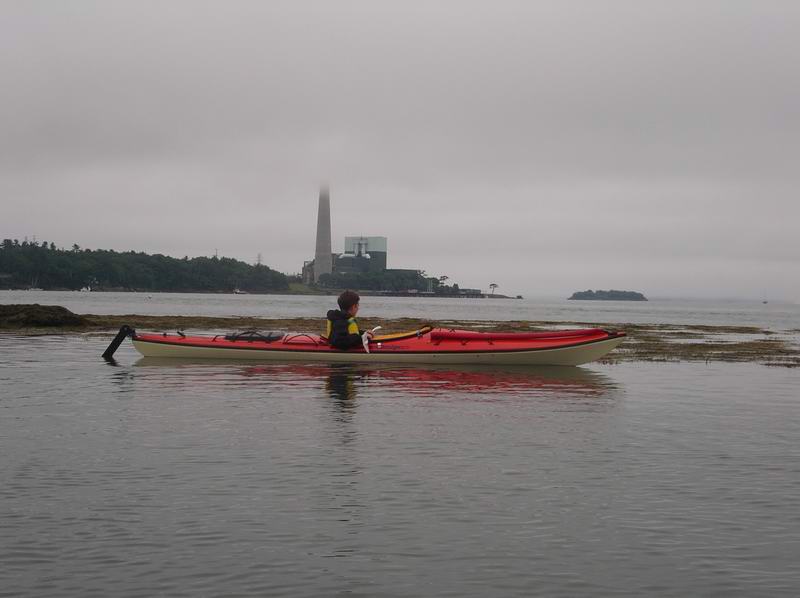 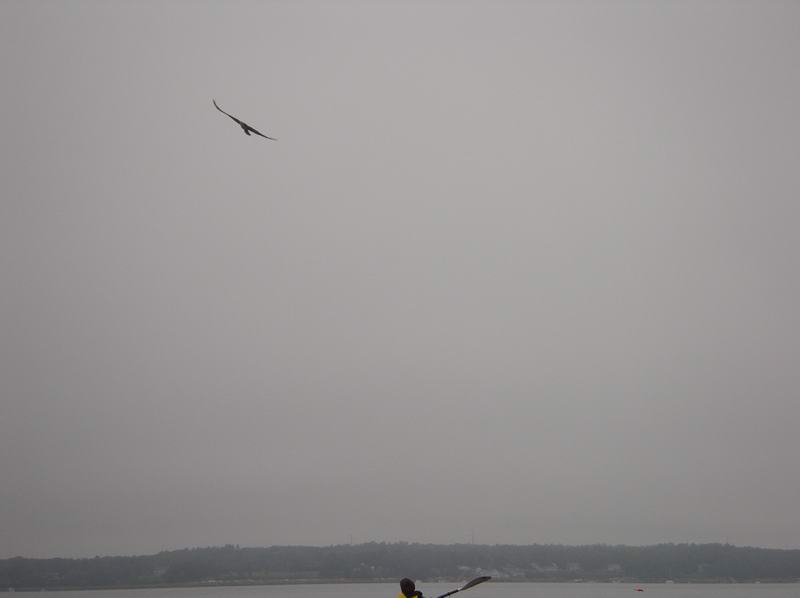 Near the power station we noticed an Osprey nest on top of some piles, and the resident Osprey took off and circled round overhead as we got too close.

Then it was off into the fog for Sturdivant Island. I don't think Mitchell thought this was a great idea, as he was feeling a little tired, and really wanted to go back to the seals. Nevertheless he paddled gamely on, and we arrived in a lot less time than I think he expected. The tide was well out by now, and we landed on a small rocky shore for lunch. 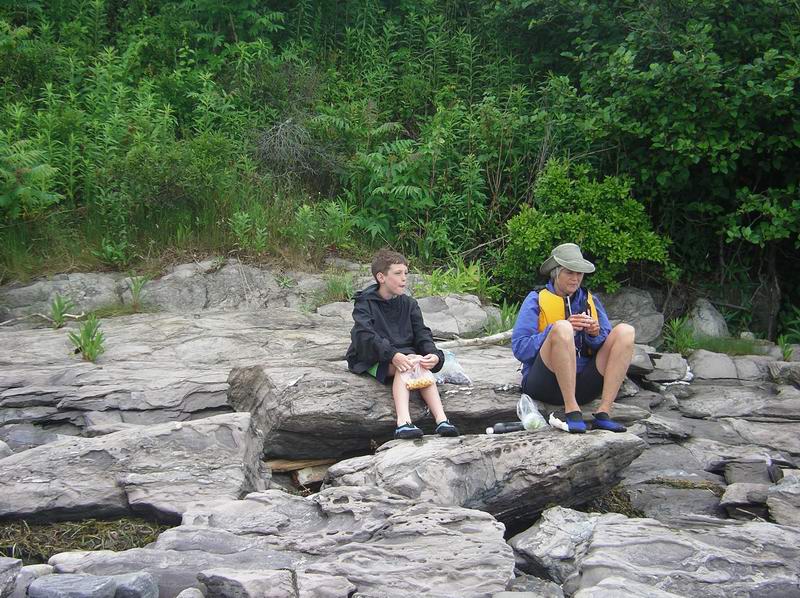 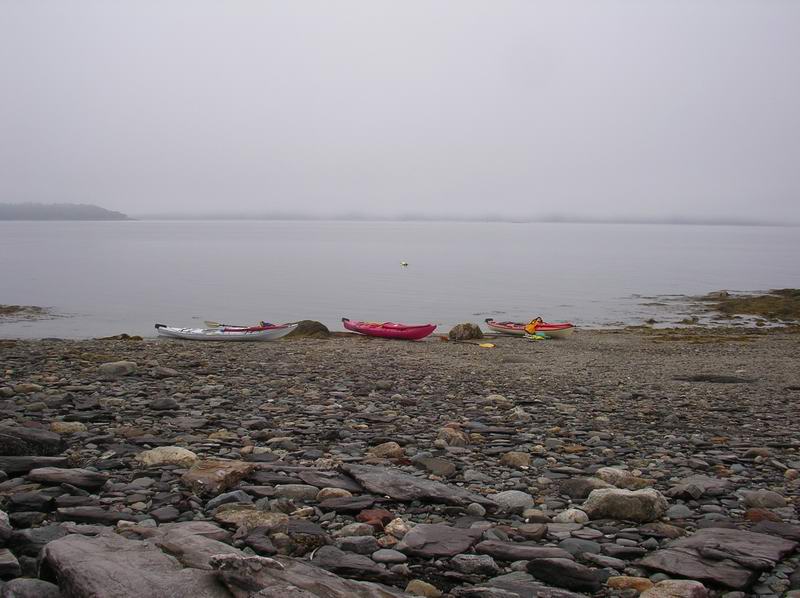 Then we retraced our path, back to the tall stack, checked out the Osprey again, then to the 'seal' rocks. Seals were now lying on the rocks, slipping into the water as we approached. Then the sea seemed to be full of inquisitive seals, as their small heads kept popping up to look at us. We sat motionless for a long time, just watching the seals as they swam very close to our kayaks - when one swam up to Mitchell's bow, then ducked underneath and came up right underneath his paddle on the other side. Mitchell was able to take his hand off the paddle and just reach down and touch it. Would you believe that - 25 years of sea kayaking and I've never got that close to seal, and a 9 1/2 year old sea kayaker gets to touch one on his first ever paddle. 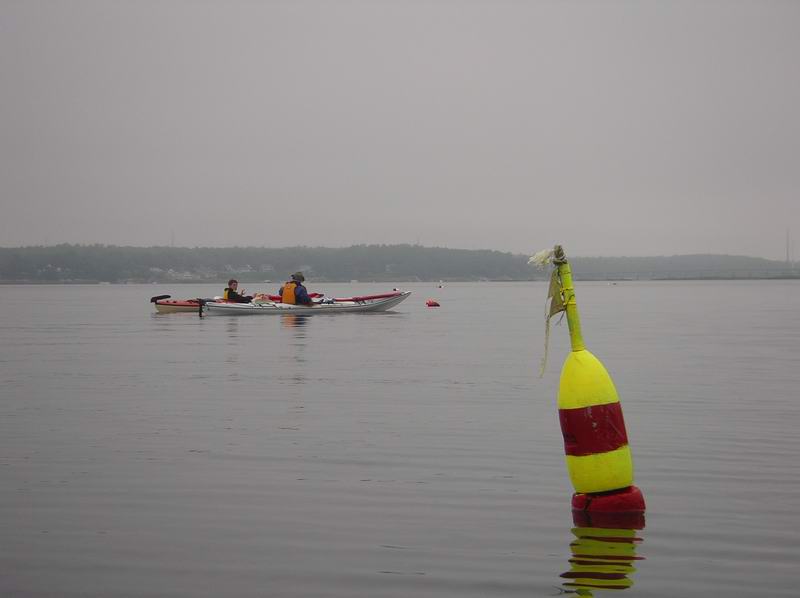